COP27 occurs at a unique moment in time for Africa and its energy use.

Africa, India and China all share about the same population of about 1.4 billion people. This will be a singular moment in time that is about to rapidly change.

In terms of primary energy demand, despite equivalent populations, Africa uses 3% global energy, India 6%, and China 27%. Emissions are mostly in line with these figures.

However, from here to 2100 the populations of these three huge geographic blocs will diverge significantly: According to UN central projections Africa will grow almost three-fold to 3.8 billion, India will remain around 1.5 billion and China will decline by almost 50% to 750 million.

Although today Africa’s energy use, and hence emissions, are a small fraction of the global total (3%) given its size and population (18%) ,Africa’s energy future impact means it has  to meet the vast domestic energy expectations of a quickly growing population.

But much of Africa remains starved of electricity supply due to its poor grid infrastructure, and its focus on fossil fuel development for export revenues, rather than domestic use.

This situation will only become more acute and unsustainable as its population quickly grows.

As our our COP27 special report outlines, Africa enters this decade at a crossroads for its long-term energy future.

Africa’s vision to expand its natural gas production will leave it financially stranded: we previously covered this topic in a detailed report, Beyond Petrostates. And despite the warnings in there of major revenue loss  by clinging to oil and gas as a primary growth industry, the African continent still seems inclined to extend its exposure and  fossil fuel dependence risk, even as its populations continue to grow quickly.

Electricity will instead be the backbone of Africa’s economic future, with solar leading the way (see chart below). Further acceleration of cost reduction will put Africa in a unique position as a beneficiary from most of the best abundance of solar potential on the planet.

Private capital can now be unlocked to invest heavily in new solar. The economic case to build profitable solar investments is now within reach thanks to rapidly falling cost of capital. Private capital along with blended finance can now leverage on Africa’s favourable climate and cheap cost of solar to scale up solar across the continent.

Time is running out, however. If no immediate actions are taken by African governments within the five years to introduce policies to aid a just transition with solar at the helm, we can rule out Africa’s central role, as the continent will not be able to meet any of the IEA’s climate scenarios. 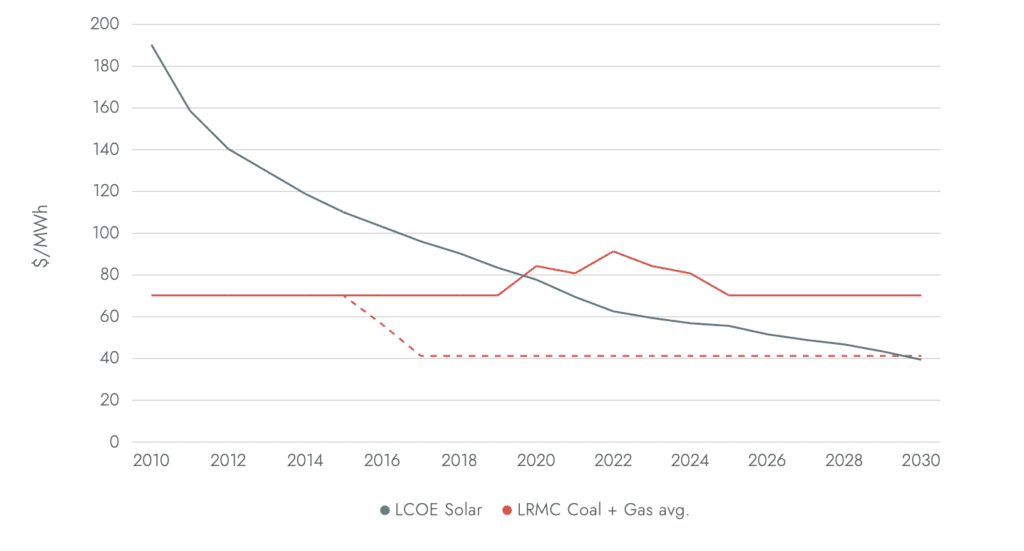 Since the start of the war in Ukraine natural gas prices, a major feedstock for producing fossil fuel-produced hydrogen (blue and grey), has soared by more than 70% on international markets triggering an energy crisis and pushing lawmakers worldwide to urgently source alternative sources of fuel.

Clean Hydrogen’s Place in the Energy Transition finds the surge in the gas price has caused the levelised cost of fossil-produced hydrogen to jump and accelerated investment and plans to build out more clean hydrogen assets as interest in the fuel rises, amid technological advances in its manufacture and falling costs. Rapid capital investment for non-fossil green hydrogen over the next few years could see its levelised cost fall under $2/kg, making it one of the cheapest forms of energy.

Green hydrogen will play a key role in our energy transition, but its applications will have to focus on the incumbent agricultural sector (fertiliser production) in which it already serves and the hard-to-abate heavy industries until technological innovation for electrolysers improves and water concerns are addressed. 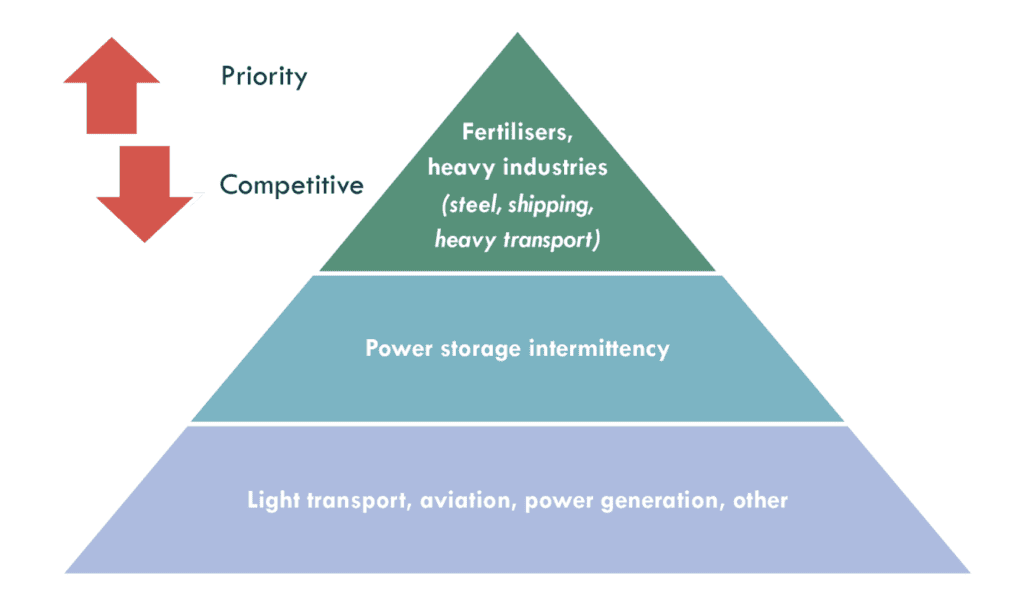 As COP 27 highlights yet again, there remains a mismatch between climate targets and actual governmental and industry responses . After all, the IEA in 2021 announced that to meet the 1.5 deg target no new oil and gas projects could be developed.

How is that working in practice?

Last year,  Carbon Tracker published its first report – Flying Blind – about the degree to which companies had disclosed, or hadn’t adequately reported, taking climate risks into account in their financial statements.

In Still Flying Blind published ahead of COP27 we note the lack of follow up.

The companies surveyed included those from the fossil fuel, mining, manufacturing, and automotive sectors that are focus companies for the investor led Climate Action 100+ engagement. Our review of over 130 of these highly carbon-exposed companies provided little evidence that they had considered the impacts of material climate-related matters in preparing their financial statements, as measured by Carbontracker and the Climate Actiion 100+ Climate Accounting and Audit Assessment (CAAA).

Figure 3: Results of the metric assessments 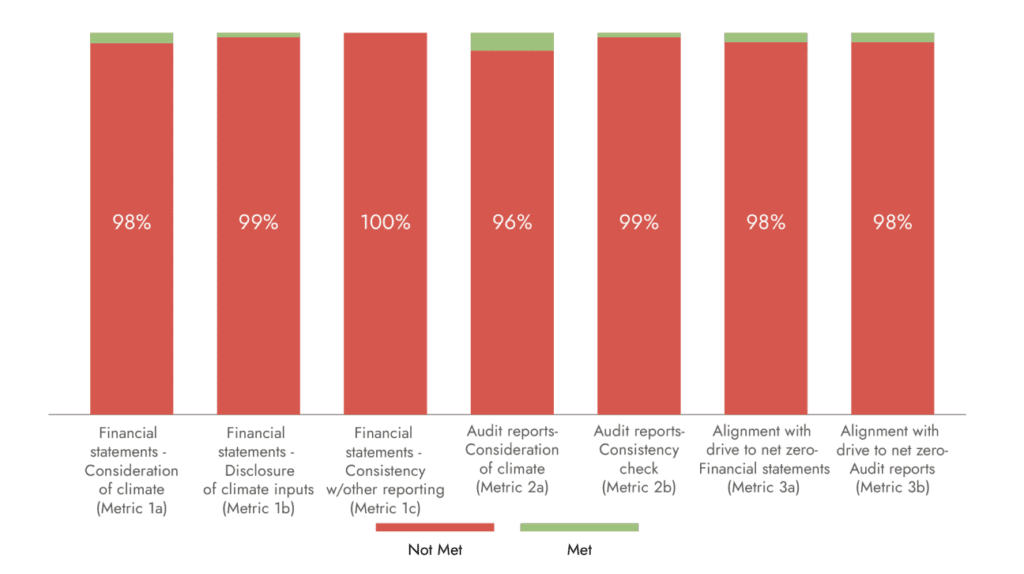 In an enduring theme of the energy transition, the “energy trilemma” of security, affordability and sustainability is rapidly being solved by renewables. Our report of Japan’s attempts to reform its energy system highlight all these issues, and show the benefits to Japan’s economy.

Amidst an energy crisis and a power supply crunch, the Japanese power sector is today experiencing unprecedented stress owing to its deep dependence on fossil fuels.

The country, in addition to adopting a 2050 carbon neutrality target has recently subscribed to a G7 pledge of achieving a predominantly decarbonised power sector by 2035, but Japan’s current policy framework is insufficient to deliver this goal and a significant acceleration in renewables deployment is required.

‘Put a Price on It’ finds a transition to renewables could decouple Japan from its history of high electricity bills, bring lower prices, increased stability, and greater energy security to Japanese consumers. We invite readers to create their own scenarios in the report by choosing a reasonable carbon price and showing its positive impact on its economy. 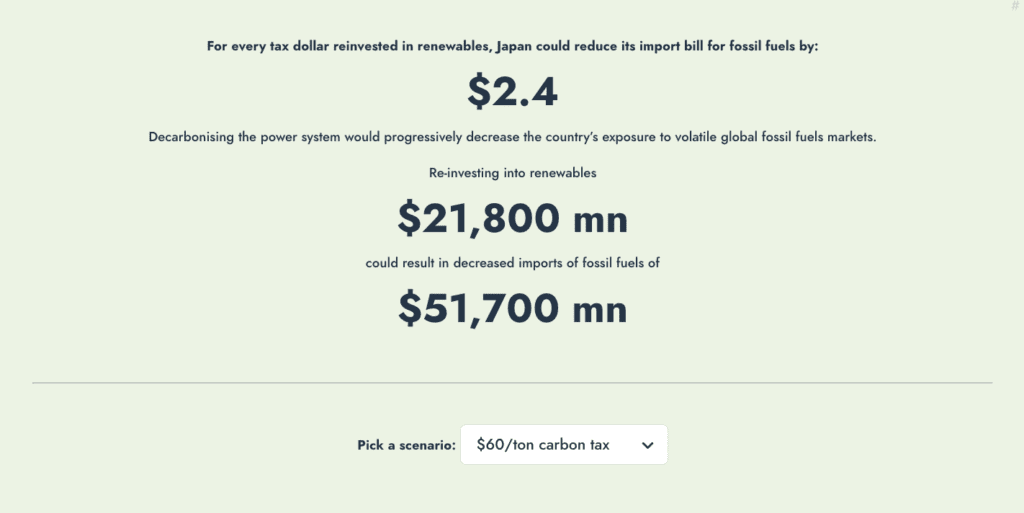 How oil and gas executives are still rewarded to chase fossil growth, despite the urgent need to transition.

Yet if anything, as this report shows, oil and gas companies are moving further into oil and gas expansion, some, especially in North America, with explicit incentivisation schemes to increase production and hence emissions.

Even more “progressive” oil and gas firms in Europe are starting to label “low-carbon” production and fuels such as fossil gas and LNG as part of their transition plans – a trend that also appeared prominently at COP27 championed by oil and gas exporting nations. 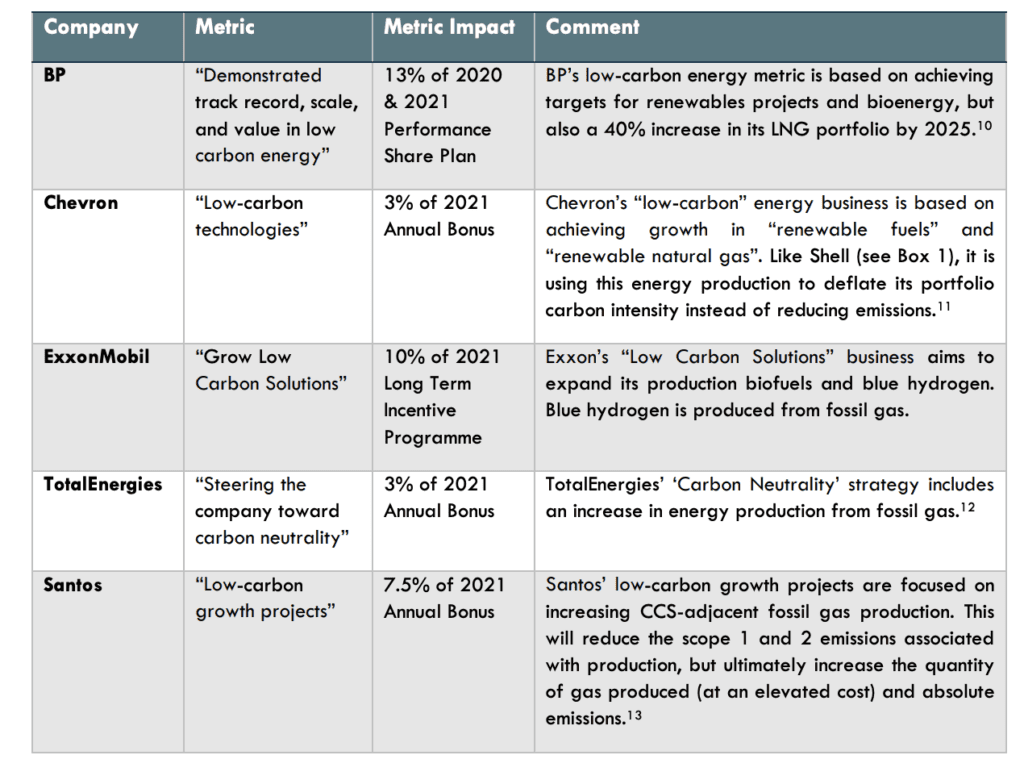 IEA World Energy Outlook 2022 – Carbon Tracker Founder Mark Campanale reacts to the WEO 2022 and lays out why the war in Ukraine is the beginning of the end for the fossil fuel sector.

The war has highlighted the fragility of the global fossil energy system – ​and the high costs this imposes upon society, with a handful of fossil fuel-rich countries exerting huge influence over the world. This is not the first time that energy has been used as a geopolitical tool; however, this time, lower-cost renewable energy alternatives give countries the potential to cut the umbilical cord of fossil import dependence.

Companies and investors who continue to ignore the financial impacts of the energy transition face holding a huge volume of material-stranded assets and accelerating decommissioning obligations as a new world is rapidly reshaped around cheap, abundant, and distributed renewable energy.

S-curves in the driving seat of the energy transition

Download Infographic Here The energy transition may well be determined by the phenomenon...

This article was first published by Brink News, with thanks to Thomas Carver. The...