In January, the Colorado Oil and Gas Conservation Commission (COGCC) will vote on the new financial assurance rules for Colorado, as required by SB-181, which mandated an overhaul of Colorado’s oil and gas regulatory system.

What’s at stake in the COGCC’s rulemaking is whether the oil and gas industry should be subject to the same standards as other Colorado borrowers.

Basically, everyone must provide financial assurance when they borrow money, like a mortgage on a home, or a lien on a new car. If you’ve borrowed money, you’ve likely had to give the lender something of value beyond your promise to pay or they wouldn’t have taken on the risk of the loan.

An oil driller’s obligation to plug and reclaim spent wells is no different, except that repayment is with services rather than cash. Without adequate security to assure those services are performed, even well-heeled producers might transfer their dying wells to shell companies who will strip the last remaining assets and walk away. It’s up to the commissioners to decide whether the risk of industry’s non-payment should sit with industry, or if it should fall to taxpayers.

The industry, led by the Colorado Oil and Gas Association (COGA) and Colorado’s largest operators, are asking the Commissioners to simultaneously believe two opposing things: first, that the industry cannot afford to secure its obligations, and second, that securing its obligations is unneeded because the industry poses no risk of default.

On ability to pay, attorney Mark J. Matthews, representing COGA in testimony,[1] makes the case that most operators can’t afford the approximately $100,000 bond to cover what the COGCC expects it will cost to plug and abandon wells. Matthews suggests that most companies would be unable to set aside sufficient collateral to secure a bond, would not be able to pay the premiums,[2] and that they wouldn’t even have sufficient credit for surety providers to offer them a bond in the first place. He goes on to say that even a far lower bond amount of $15,000 would be widely unaffordable to Colorado operators.[3]If true, this surprising admission is a warning that thousands of orphan wells are likely looming on the horizon.

On the other hand, representatives of Colorado’s largest operators have asserted that they are responsibly plugging wells[4] and have the cash to continue, and that full-cost financial assurance is a misallocation of capital that may somehow reduce plugging activity.[5]

Both statements are partially true because the Colorado oil and gas industry is not monolithic. Rather, it is comprised of two groups: the Haves––the big drillers who can pay but don’t want to—and Have Nots, who operate the hand-me-down wells and likely cannot afford full-cost financial assurance. The Haves and Have Nots are two sides of the same coin in a system that, by design or default, is producing a growing inventory of marginally productive wells, increasing the risk for Colorado taxpayers.

Consider this from the COGCC’s data,[6] there are 368 operators under COGCC jurisdiction holding unplugged wells, and of them, only 211 have any producing wells. The other 157 hold only unplugged wells that are not producing oil or gas. If you are charged with ensuring that wells are plugged at the end of their useful lives, this is a red flag.

Of the 211 operators with any production, 69 show average daily production of less than 2 barrels of oil equivalent per day (boe/d) per well—the limit that former COGCC Director Matt Lepore, now representing the three largest producers in Colorado, suggests is the point at which COGCC should start considering full-cost financial assurance. Widening the view to 5 boe/d or less—the COGCC’s original proposed benchmark for risk—results in a total of 113 operators, more than half of the active operators in the state.[7]

Those 113 companies with very low producing well portfolios own 7,249 wells under state jurisdiction (see Figure 1)—a scary number, but still just about 17% of the unplugged wells subject to state financial assurance rules, which brings us to the Haves.

The Haves encompass the other 98 companies that produce 5 boe/d per well or more and own almost 34,000 wells, four out of five unplugged wells under Colorado jurisdiction. Almost 29,000 of those are owned by just 64 companies whose average daily well production is at least 15 BOE (Figure 1). Some back of the envelope math suggests this group can afford to put some money away to meet their plugging obligations and more. As of the latest EIA data, the 3-month trailing average price of oil (WTI) is about $76/bbl.[8] If lifting costs are, say, $40/bbl and a well produces a meager 5 bbl/d, each well would produce $65,700 of free cash flow in a year. In two years, they would produce almost as much free cash as our average expected cost[9] to plug wells in Colorado and over $30K more than the $100,000 hypothetical bond amount referenced in testimony, and this calculation ignores any cash that current and prior owners have socked away over decades of producing oil and gas.

Figure 1: Company counts and well counts by average production per well per day 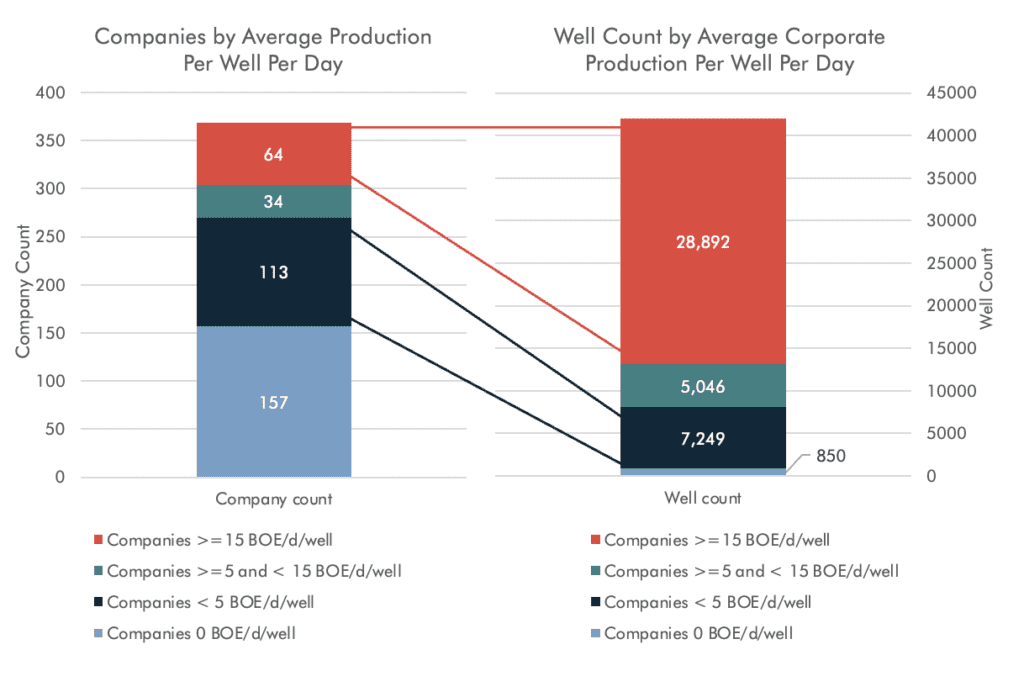 At those prices, 2020 production levels, and assuming for argument’s sake $40/bbl lifting costs, the top 5 producers in the state would generate $4.4 billion in free cash from oil alone over a single year.[10]That’s more than enough to provide a $100,000 cash bond for all 42,000 unplugged wells under COGCC jurisdiction.[11]

As for the Have Nots, the Haves have shown us the solution. Take Apache Corporation, for example. Apache Corporation required 125% financial assurance/collateral to cover plug and abandonment liabilities when it sold offshore legacy properties to the twice-bankrupt Fieldwood Energy.[12] Apache correctly realized that a mere promise to cover these liabilities was not good enough and it needed to get money upfront.

Governments foreign and domestic are catching on, too. North Dakota has identified plugging and reclamation costs to be roughly a quarter of a million dollars; they are requiring single-well bonds on transfers of inactive wells. Australia, tired of seeing massive liabilities being offloaded to entities with no ability to pay, imposed a levy on the entire sector so that it was industry, and not taxpayers, that were left with the bill.

COGCC doesn’t know which operators are truly unable to pay and which are crying crocodile’s tears, but it can be assured that the longer it waits in obtaining financial assurance, the harder it will get. To be successful, COGCC will have to put the half-truths from the Haves and Have Nots together and understand that this is a single system through which wells pass from viable operators to those who have little hope—and in some cases, no intention—of plugging these wells. This January offers a rare opportunity to fix the system. It must not be missed.

[2] COGCC’s 2018 Financial Assurance Technical Working Group indicated that premiums were less than 1% of bond values—industry now testifies they are 2.5-3.5%. Either they are wrong, or insurers are sending the regulators the undeniable signal that it is risky business being responsible for operator P&A liabilities in Colorado. Final report available at: https://cogcc.state.co.us/documents/library/Technical/FATWG/Financial_Assurance_Technical_Working_Group_Final_Report_Dec_2018.pdf

[4] COGCC Commission Financial Assurance Hearing – Nov 10, 2021. The data shows they are plugging when they’re drilling—will they continue to do so when the drilling stops? See They Only Fill When They Drill and When Fracking Stops, Who Will Plug Colorado’s Wells.

[9] See:  https://carbontracker.org/aro-portal-plugging-liability-estimator-tool/.  Look up Colorado, divide cost estimate by well count, and the result is approximately $139,000.

[12] Apache sought this protection because, in the federal offshore context, predecessor companies are jointly and severally liable for plugging and abandonment costs if the current operators cannot pay.

Russia’s unprovoked invasion of Ukraine has created terrible consequences for those...