Treat the cause, not the symptom

As Colorado considers improvements to its oil and gas regulations, some will undoubtedly point to its idle well program as a beacon of success.  That program currently requires the “riskiest” wells —those that are no longer producing oil and gas — to be individually bonded at $10,000 per well instead of being included in blanket bonds that cover an unlimited number of wells for only $100,000.  Unfortunately, idle well bonds treat the symptom, not the cause.

The root cause of idle and orphan wells in Colorado and elsewhere is the moral hazard arising from blanket bonds and individual bond amounts that are far too low, which together create a financial disincentive to close wells that have reached the end of their economic lives.  Instead of addressing the root cause, Colorado (like some other states) adopted a symptomatic solution: require operators to provide individual bonds on inactive wells.

This improved the extremely low bond coverage on inactive wells previously covered by blanket bonds. However, because the individual bond amount of $10,000 is much less than the average cost to plug a well in Colorado, which we estimate to be $140,000, the underlying moral hazard remains.  As a result, inventories of grossly under bonded inactive wells can be predicted to grow, and the state’s ability to implement the fundamental solution – full bonding – will atrophy.

Colorado’s growing orphan well risk – the risk that inactive unplugged wells will be orphaned to the state — is apparent.  As we reported in Billion Dollar Orphans, Colorado has 60,000 unplugged oil and gas wells.  Only 20 percent of these wells produce more than marginal quantities of oil and gas.  Half are stripper wells producing less than 15 bbl of oil or 90 mcf of gas per day.  Ten percent have not produced in the past two years.  Another 20 percent are injection and other types of non-production wells.  We estimate it will cost more than $8 billion to plug all of these wells, excluding reclamation costs.  Yet, to secure these obligations, Colorado holds a mere $161 million in active individual and blanket bonds that are available to plug these wells.  That’s just two percent of the estimated plugging costs.

The diagram below illustrates how Colorado shifted the burden of solving its growing idle and orphan well problem by treating the symptom.  Colorado’s idle well bond program created two balancing (B) feedback loops, one ameliorating the state’s orphan well risk and the other reducing political pressure to eliminate blanket bonds entirely and require full bonding on all active and inactive wells.

Because low idle well bond amounts give Colorado operators a cost-effective alternative to plugging idle wells, the number of idle wells will predictably increase (+).  As the number of under secured idle wells increases, the state will move further away from full bonding (-). 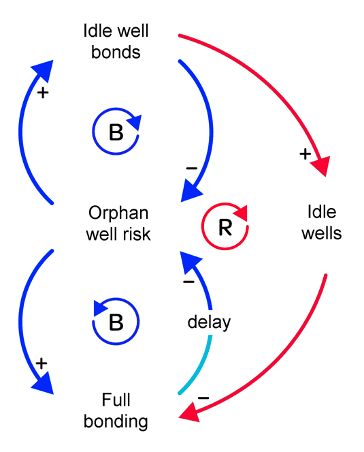 The insidious trick of Colorado’s “shifting the burden” response is that it forms a vicious reinforcing (R) loop that over time will undermine the state’s ability to ensure that industry pays its environmental debts while offering false assurances that the idle and orphan well problem is solved.

Ask yourself, is it easier to fully bond oilfield retirement costs now or wait for the oil and gas industry to slip into further decline?