In ancient Greek theatre, deus ex machina (“god from the machine”) is when a seemingly intractable plot issue is suddenly solved out of the blue, perhaps involving an actor being dangled from above by a crane.

The stage is set – many oil and gas companies are planning to increase production at a rate above even BAU demand growth, never mind the absolute reductions that are needed to achieve the Paris goals. How then to resolve this contradiction while maintaining social licence to operate and the confidence of investors without relying on implausible plot twists later on? With concerns about climate change continually increasing, the risk of stakeholders rolling their eyes and asking for their money back is very real.

The herd of industry announcements so far suggests that it feels the answer largely hinges on non-binding emissions “ambitions” usually framed in terms of relative carbon intensity of energy output, hence allowing a continued growth story rather than the absolute reductions required to stabilise global temperatures.

Discussion of the link between our planet’s finite climate limits and corporate investment activity, and hence the question of stranded assets or the need for reductions in fossil fuel production, is normally conspicuous by its absence.

Total has recently amended its climate “ambition” following engagement with the CA100+ initiative. Its previous goal was to reduce carbon intensity of energy sales by 15% in 2030 and 25% to 40% in 2040, illustrated in the below classic case of y-axis truncation. 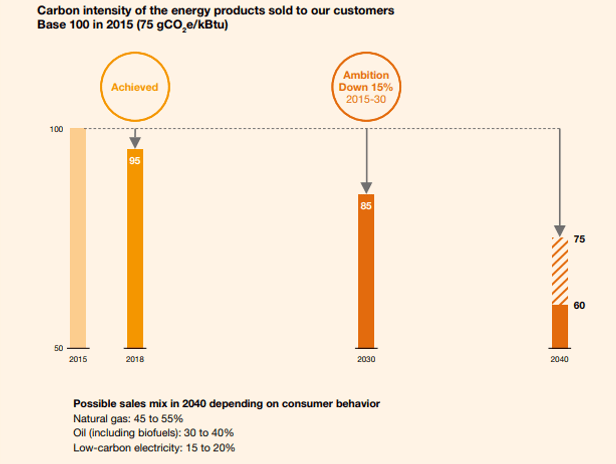 With its new announcement, Total extended this ambition to 2050, accelerating to 60% intensity reduction globally and 100% in Europe in the latter 10 years. The 2040 target is refined to a 35% reduction, rather than the previous range. The assumed rate of decarbonisation therefore rises from an average 1.2% p.a. for the next decade to 2.5% p.a. post-2040. (These targets are set relative to today’s intensity; viewed from any point in the future the required rate will actually be increasing exponentially in percentage terms as the reductions will need to be made from an increasingly lower base. From Total’s 2035 standpoint, having already achieved its 35% reduction target, hitting the 60% target will require that it cuts its carbon intensity by 38% in 10 years).

Some competitors also have trajectories that speed up in future decades. Repsol’s ambition leaps from a 40% decrease in intensity in 2040 to 100% in 2050. Eni’s goes from 15% in 2035 to 55% fifteen years later. BP end up at a 100% decrease for emissions related to their upstream production by 2050, but have yet to set any interim targets. Something exciting must be brewing for the 2040s.

These shifts in portfolio balance 20 years hence assume quite a level of foresight for an industry that only tends to give capex guidance for a year or two in the future, and has a pretty dire historical record of both predicting cycles in its oil and gas industry of specialism let alone sustainably creating value in other sectors. It’s also quite a big cheque to write on behalf of a future CEO, considering that they might still be at university.

Achieving net zero does require a multi-decade perspective. And with new technologies advancing at a compounding rate, it is not crazy to expect the global rate of change to increase over time. However, without greater detail on how the companies are reconfiguring their investment plans to fit within a Paris-aligned carbon budget, there may be concerns that they are leaving the hard work until tomorrow.

This points to a fundamental flaw in the ambitions themselves. Despite this very long frame of reference and going all the way to net zero for some portions of production, the intensity framing and open-ended nature of the other portions means there is no indication of the level of aggregate emissions – the key determinant of global warming – that will be locked in by company investment programmes over the next 30 years.

Oil and gas companies are of course part of a longer value chain. With the bulk of emissions related to their oil and gas activities resulting from consumption by the consumer, companies have long seen the responsibility for achieving climate targets as resting on the demand side. If our expectations are that we construct an energy system where consumers would buy the fossil fuels that would take us to 3 degrees of warming and beyond, producers will invest to fulfil that prophecy.

However, at this point the question is not necessarily about responsibility in a legal sense, but rather acting constructively as part of global efforts to mitigate warming rather than undermining them. A company might not be able to control the actions of its customers, but it probably has a pretty good idea of what will happen to each barrel of gasoline it sells. The supply of energy is intrinsically linked to its ultimate consumption.

The recent scope 3 emissions announcements do appear to indicate increasing recognition that the supply of energy plays a part in shaping the future. In the same way that a gridlocked commuter is not stuck in traffic, he is the traffic, it is very difficult to see big energy companies as existing on a separate plane from the rest of society.

Perhaps greater confidence in the future actions of consumers is feeding through into more ambitious goals from energy producers. Shell’s ambition explicitly notes the incorporation of changes in consumer behaviour to reach net zero. However, this should not set up a blame game if targets are missed at a later date. Furthermore, it is also important not to assume that being carried along for the ride will go smoothly. Indeed, it is these societal changes that amplify the risk of asset stranding if investments are inconsistent.

As ShareAction points out, Total’s target of net zero in Europe (EU, Norway and UK) chimes with pre-existing net zero pledges in those countries. If those state-level targets are achieved, Total is likely to achieve its own version accordingly – however if it has not invested in assets that are resilient in such a low fossil fuel demand outcome, it still runs the risk of delivering poor financial results.

From proclamation to implementation

We welcome companies setting stretching goals when it comes to emissions. It is also not unreasonable for a company to not know quite how it is going to achieve its long-term decarbonisation aims – after all, none of us knows what the state of technology will be in a few decades time. Furthermore, companies will want to maintain a degree of flexibility. However, discussion is rapidly moving on from the need to be seen to do something about cutting emissions to the need to make it real, and crucially doing so in a way that maximises returns.

We believe this aspect is sorely lacking from many company announcements. Which projects will a company not sanction due to falling outside of a finite, Paris-compliant carbon budget, and how is that determination made? How will success be measured in the near and medium term? Mollifying the twin concerns of stakeholders – to both align emissions with the Paris goals and to avoid destroying financial value by investing in assets that are stranded in future market shifts – should require these questions to be answered, without requiring too much faith or leaving too much up to outside intervention.

As the metaphorical oil tanker takes a certain amount of time to change course, so does a large oil and gas producer, given the long lead times of capital-intensive projects and the challenges inherent to a fundamental shift in culture and business model. But with decisions now affecting balance sheets and GHG emissions for decades, we think there is a risk that inadequately framed and detailed ambitions will fail to result in the immediate changes in behaviour required, no matter how earnestly held.

Climate Disclosures -- Under investors’ microscopes, but still out of focus LONDON,...