The UK government’s support for the fossil fuel industry has come under increased scrutiny in recent years under mounting pressure to align public policy with the warming targets set out under the Paris agreement. In particular, in the last year the government’s support for fossil fuels abroad through the agency UK Export Finance (UKEF) has been thrown into the limelight. A parliamentary inquiry by the Environmental Audit Committee (EAC), completed in mid-2019, as well as a review by Greenpeace and the BBC in January 2020, both criticised UKEF’s support for overseas fossil fuel projects, arguing that it directly contributes to significant greenhouse gas emissions.[i] [ii] This has raised a debate about whether the government should instruct UKEF to stop financing such projects, particularly in the context of the UK hosting the COP26 climate summit in Glasgow in 2021.

UKEF is a government agency under the Department for International Trade whose mandate is to support UK exports and overseas investments, mainly by providing finance to foreign trade counterparts. It has a total ‘support capacity’ (maximum credit risk allowance) of £50bn, capped at £5bn per country, with £3bn available as direct loans; the remainder is largely disbursed in the form of loan guarantees and various types of financial insurance.

According to UKEF’s evidence submitted to the EAC inquiry, its maximum liability (i.e., the highest amount payable in the event of a claim on its policies) to fossil fuel exporters amounted to £2.5bn in the 2013/14 to 2017/18 financial years.[iii] This represented 21% of its total support over that period. In this period and in the year since, two groups of facilities have been clearly linked to upstream oil and gas activities:

In this article, we look to dig deeper into the underlying projects using our least-cost approach, developed in prior research such as our Breaking the Habit report from September 2019.[ix] The purpose is to identify whether the UKEF-supported projects would be financially competitive in a Paris-compliant world, based on the underlying economics of the projects and assuming that any given demand level is met by the supply options with the lowest production costs. Those projects with higher costs risk being stranded (failing to deliver an adequate return) as fossil fuel demand weakens, creating financial risks for investors funding them.[x]

To explore whether projects fit within a low carbon outcome we compare potential supply of oil and gas to the demand levels in two different scenarios developed by the International Energy Agency (IEA), which outline sets of technological and policy trajectories associated with different warming outcomes. The strictest is the Beyond 2 Degrees Scenario (B2DS), approximately consistent with a 50% chance of 1.6°C warming; the less stringent is the Sustainable Development Scenario (SDS), consistent with 1.7 – 1.8°C of warming (no probabilities provided). Our “business-as-usual” reference point is the New Policies Scenario (NPS), which the IEA considers consistent with a 50% chance of 2.7°C warming.

To fit within the demand levels of the SDS and B2DS, we estimate that oil projects must generate a 15% internal rate of return (IRR) at oil prices in the late $40s and late $30s respectively.

The breakeven oil price for this asset at approval in 2015 – i.e., the price required to recover capital and operational costs and deliver a given return – is estimated by Rystad Energy to be $67/barrel (bbl) to deliver a 10% IRR. This is above not just the Brent crude prices for most of the time since approval, but also significantly above the marginal costs required to fit within either the B2DS or SDS.[xi]

As such, the asset is likely to fail to deliver an economic return in a low-carbon world, and this will not have been offset by historical cash flows. This is represented in figure 1 below. 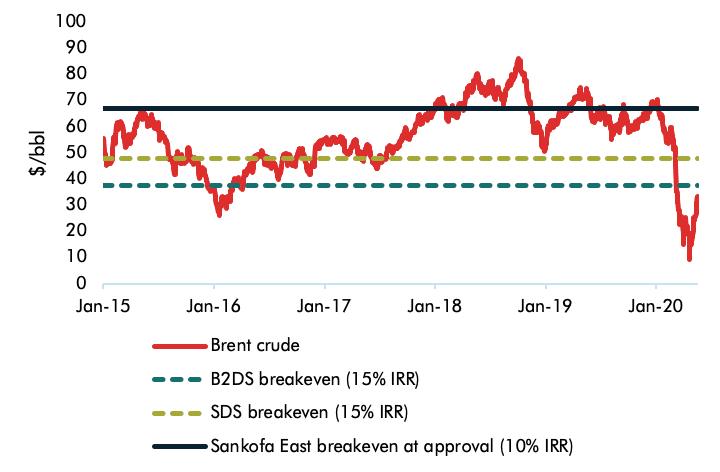 We do not model the other two fields on a detailed basis using the least cost approach, given that demand for the gas from the fields for local consumption is unlikely to be based on true supply-on-supply competition.

UKEF’s Petrobras facility only names the basins where drilling and exploration will take place, making it harder to be specific – the Campos, Santos and Espirito Santos basins together contain dozens of projects, some of which started producing in the 1950s. We therefore compare to the overall picture for currently unsanctioned assets in these basins, which lie primarily in ultra-deep water. Again, we focus on oil fields, which accounted for 98% of oil-equivalent production from these basins in 2019.

Most of the potential capex in these fields fails to be competitive under either low carbon scenario. Effectively no capex on new oil fields goes ahead in the B2DS, and capex levels in the SDS are around 90% lower than in the “business as usual” NPS. 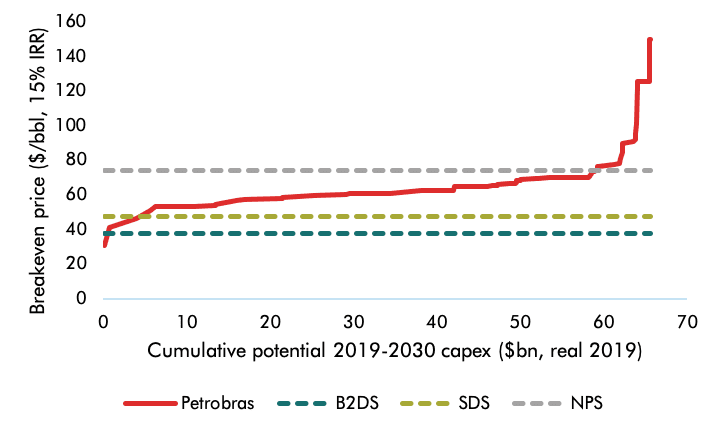 Accordingly, there is a high risk that the exploration and production activities in Brazil supported by UKEF financing may fail to deliver adequate returns in a low-carbon world based on typical project costs.

Our results show that recent UKEF financing related to upstream oil is generally associated with projects that are likely to fail to be competitive on economic grounds in a Paris-compliant world. As such, further UKEF funding in these sectors points to the risk of stranded assets and value destruction down the line. We could not find explicit mention that this has been considered in its existing due diligence assessments.

It should be noted that the government has recognised the issues around UKEF’s activities to some extent. Following the EAC inquiry, it described the opportunity to “consider UKEF’s role in respect of climate change”, and that it was “right to be ambitious about the steps that UKEF might take”.[xii] Under the Green Finance Strategy, it has also been announced that UKEF will make climate-related financial disclosures in line with the recommendations of the Task Force on Climate-related Financial Disclosure (TCFD), which emphasises the importance of scenario analysis relating to low-carbon outcomes.

Nevertheless, the government’s erstwhile assertion that emissions from UKEF-supported projects “are owned and managed by other countries and not the UK or UKEF” signals a certain lack of leadership on the issue.[xiii] Greater disclosure also needs to be matched with systematic behaviour change. Although the Covid-19 crisis is understandably front and centre for policymakers at the moment, climate change remains high on the agenda and will receive fresh, and perhaps increased, attention as we emerge from the pandemic. Many will therefore expect the UK to show greater leadership on decarbonisation, not least in view of its pledge to reach net zero by 2050 and its hosting of COP26 in 2021. Failure to adjust UKEF’s mandate accordingly would thus create policy inconsistencies that risk undermining the government’s wider strategy on climate change.

[vii] This is the sum of the maximum liability from each year, which may double count certain facilities that continue over several years. As such, it may not be comparable with the figures reported by UKEF to the EAC.

[x] Please refer to Breaking the Habit for more detail on methodology.

[xi] Our marginal cost benchmarks for the SDS and B2DS are based on an IRR of 15% to allow for friction in the form of cost overruns and delays. Adjusting to a 10% IRR would allow for a slightly higher project breakeven, but not high enough for the OCTP assets to pass muster.

The Urgent Case for A Green New Deal

Economist Ann Pettifor is one of several leading thinkers publishing books on the Green...

Carbon Tracker, IEEFA and ICSC to help the Philippines with energy transition risk

Last week Carbon Tracker’s power & utilities team was in Manila to attend the...