99% of producers give the rest a bad name

There’s a quip about lawyers that goes 99% of attorneys give the rest a bad name.  The same can be said about oil producers with respect to plugging inactive wells.

Of the largest active producers in Colorado by number of wells, Occidental Petroleum (formerly Kerr-McGee/Anadarko) and Noble Energy (recently acquired by Chevron) have by the far the largest market value at a combined $225 billion. These two companies dwarf the rest; they are the “1 percent” by market value and financial ability to fulfill their legal obligations to plug nonproductive wells.

The 1 percent say they are doing a great job at plugging wells, and justifiably so.  Occidental, the largest producer in the state, says between 2017 to 2020 it plugged 2,224 wells while drilling 937 (about two wells plugged for each well drilled).  Noble says it plugged 2,200 wells since 2017 (about six plugged for each well drilled) at a cost exceeding $200 million (over $90,000 per well).

Based on their financial strength, the 1 percent seem to pose little risk of not performing their end-of-life closure obligations, at least in the near term.  Moreover, they have the demonstrated ability to plug more wells than they drill, at least for now.  The same cannot be said for the other 99 percent of the state’s oil and gas producers.

The purpose of financial assurance is to ensure that operators, not taxpayers, pay to plug the wells they profited from — that was the express purpose of SB 181 in the Colorado General Assembly.  The heart of the matter is non-performance risk and how to measure and price it.

State plugging data show that the 1 percent are way ahead of the 99.  From 2017 through 2020, operators drilled 6,500 wells and plugged 8,100 wells statewide, meaning Occidental and Noble alone accounted for over half of all wells plugged, though they operate less than 20% of the unplugged wells identified in the Colorado Oil and Gas Conservation Commission (COGCC) database.

As shown in the table below, our analysis of state data shows that the pace of plugging was much higher than usual in 2017, 2018, and 2019 before returning to normal levels in 2020.

Over the past 10 years, the state has reported an average of 1,300 wells plugged per year.  At this pace, it would take another 50 years to plug the state’s 60,000 unplugged wells reported by Enverus.  Any new drilling would only extend this time horizon.

Maybe that would be okay if industry was going to keep drilling and plugging in perpetuity.  But the data tells a different story — one with a large and aging inventory of mostly marginal and inactive wells just as drilling is declining significantly.  The state’s unplugged wells are getting older.  A 2015 analysis of state data showed that the average productive lifespan of a Colorado oil and gas well is 12 years.  But just because the productive lifespan is short doesn’t mean that wells are plugged promptly thereafter; our analysis of current Enverus data shows that the average age of the state’s unplugged wells is 20 years.

You can see the details in the overlapping histogram below, which shows, in blue bars extending to the x-axis, the number of wells drilled in Colorado in five-year intervals.  The visible portion of the blue column represents the number of wells that have been plugged. 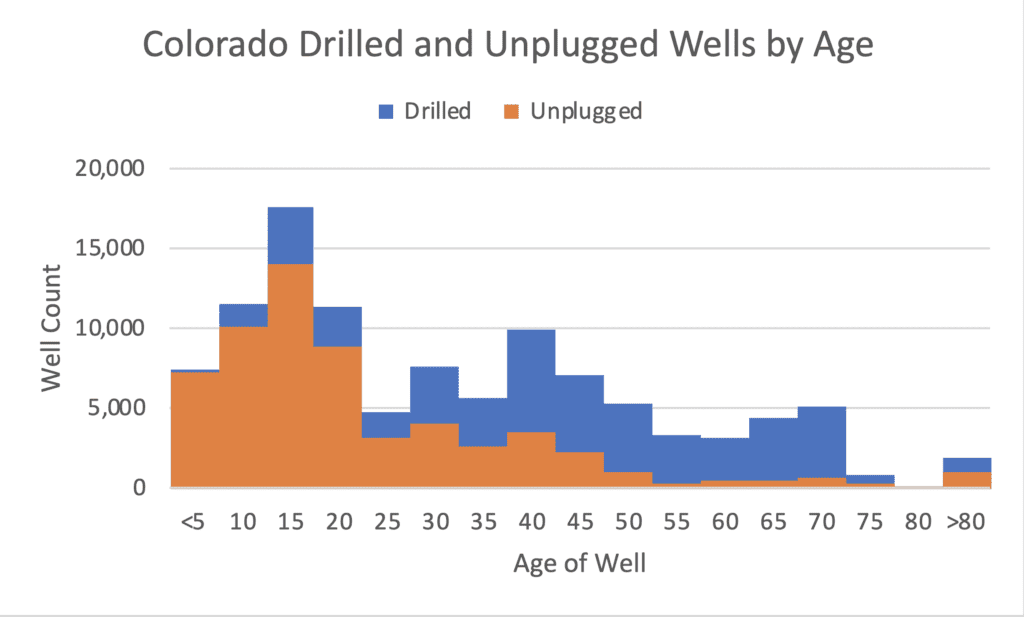 The above chart shows that the pace of drilling in Colorado has slowed significantly over the past 10 years.  Contrast this with the growth in unplugged wells shown in the chart below. 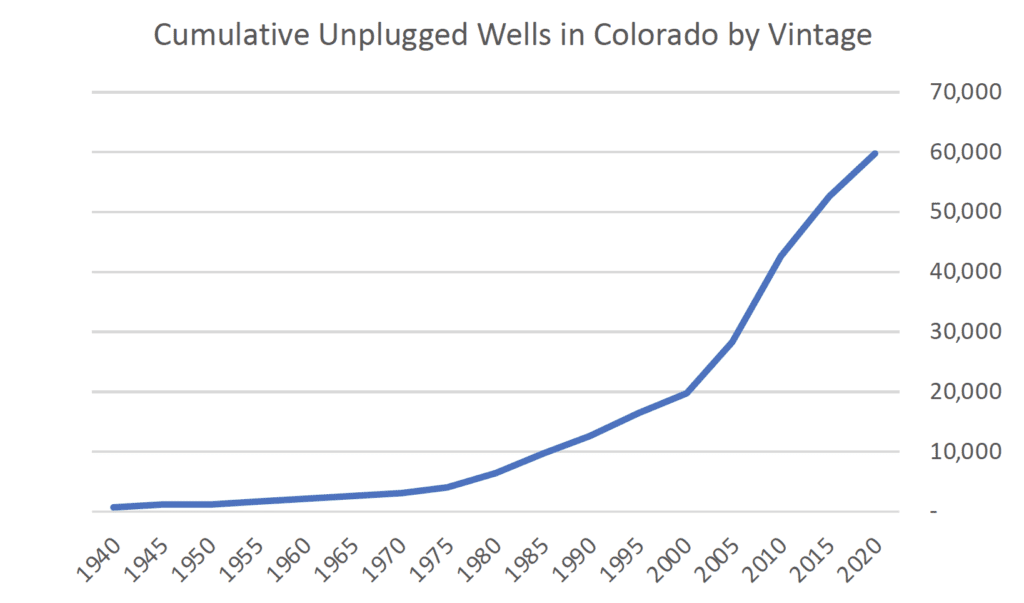 The fact that the state’s wells are growing old and the pace of new drilling has slowed might not be a concern if the state’s inventory of unplugged wells were stocked with strong economic performers.  On the whole, however, these wells are not prize assets that can afford to fund their own retirement.  Not all will become orphans, but many will.

From the state’s perspective, the riskier wells are those which no longer produce oil and gas—or not much of it.  As we reported in Billion Dollar Orphans, of Colorado’s 60,000 unplugged oil and gas wells, only 20 percent produce more than marginal quantities of oil and gas.  Half are stripper wells.[1]  Ten percent have not produced in the past two years.  Another 20 percent are injection and other types of non-production wells.

Using Carbon Tracker’s online Plugging Liability Estimator Tool, which allows users to look up plugging cost estimates by state and operator and assess orphan well risk based on well production and activity status, we estimate it will cost $8 billion to plug all of Colorado’s unplugged wells.  Yet, to secure these obligations, the state currently holds a mere $160 million in individual and blanket bonds.  That’s just two percent of estimated plugging costs.

The 1 percent suggest they pose low nonperformance risk.  True enough, today.  But knowing that Colorado cannot have two bonding regimes, one for the 1 percent and another for everyone else, and unable to argue that they cannot afford full bonding, the 1 percent claim that higher bonding for the 99 percent will make the problem worse by increasing the number of orphaned wells in the short term.  It’s a self-serving twist on the familiar self-hostage scenario.

Fortunately, there is an easy, straightforward solution that can provide financial assurance and adjust for the risks posed by individual operators — impose full cost bonding on everyone and let the financial markets underwrite and price the non-performance risk of individual operators.  If the 1 percent pose little risk now and, in the future, this will be reflected in the prices they can obtain from the surety bond market.  True, bond premiums and collateral requirements will be higher for smaller, undercapitalized operators than for the 1 percent.  But this reflects economic reality in a free market.

In contrast to the existing approach, which serves as a negative carbon tax, the free-market approach has another benefit.  It relieves the state from making predictions about the energy transition.  As the world transitions to “net zero,” even the 1 percent could become a non-performance risk in coming decades.   Surety bond companies are also free of any perceived conflicts of interest and favoritism toward industry.

[1] Federal tax law identifies stripper wells as those which produce less than 15 boe/d.