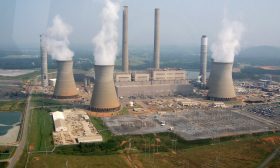 London, 19th April 2013 — Today new research by Carbon Tracker Initiative and the Grantham Research Institute on Climate Change and the Environment at London School of Economics and Political Science reveals that despite fossil fuel reserves already far exceeding the carbon budget to avoid global warming of more than 2°C, $674 billion was spent last year finding and developing new potentially stranded assets. If this continues for the next decade, economies will see over $6trillion in wasted capital.

The analysis shows that between 60-80% of coal, oil and gas reserves of publicly listed companies could be classified ‘unburnable’ if the world is to achieve emissions reductions that mean an 80% probability of not exceeding global warming of 2°C. Company valuation and credit ratings methodologies do not typically inform investors whether they have exposure to these stranded assets. The markets continue to reward reserves replacement, rather than considering reserves redundancy.

The research highlights that the 200 listed companies analysed in the study own 762 billion tonnes of carbon dioxide (CO2) through their reserves of coal, oil and gas which supports share value of $4trillion and services $1.5trillion in outstanding corporate debt. To achieve emissions reductions consistent with an 80% chance of achieving the 2°C target, the fossil fuel reserves of these listed companies would likely have to comply with a budget of about 125 – 275 billion tonnes of CO2 – this budget is proportional to the quarter share of reserves which they own.

An optimistic scenario was applied to stress-test the carbon budgets. This assumed that more effort was applied to non-CO2 emissions, (e.g. methane from waste and agriculture), which resulted in freeing up more CO2 budget for fossil fuels. This approach indicates a carbon budget for an 80% chance of avoiding global warming of more than 2°C is about 900 billion tonnes up to 2050, and about 1,075 billion tonnes for a 50% chance. However under a more precautionary scenario, the carbon budget could be around half this amount – 500 billion tonnes. This results in the range of 60-80% of total reserves being in excess of the 2°C budget.

Even if CCS is deployed in line with an optimistic scenario by 2050, fossil fuel carbon budgets would only be extended by 125GtCO2, allowing the equivalent to 4% of current global reserves to be burned as long as their emissions are captured and stored. Beyond 2050, the total carbon budget is very small for a 2°C target, which means that reserves will remain unburnable during the second half of the century unless there is a dramatic development of CCS after 2050.

The analysis concludes that even a less ambitious climate goal, like a 3°C rise in average global temperature or more, which would pose significantly greater risks for our society and economy, would still imply significant constraints on our use of fossil fuel reserves between now and 2050. Yet companies in the oil, gas and coal sectors are seeking to develop further resources which could double the level of potential CO2 emissions on the world’s stock exchanges to 1,541 billion tonnes. Current extractives sector business models are based on assumptions that there are no limits to emissions. This strategy is not compatible with a carbon-constrained economy.

The study makes a number of recommendations to help governments, regulators and investors to manage these substantial carbon valuation risks. Financial regulators should require companies to disclose the potential CO2 emissions that are embedded in fossil fuel reserves. Finance ministers should initiate an international process to incorporate climate change into the assessment and management of systemic risk in capital markets. And investors should challenge the strategies of companies which are using shareholder funds to develop high-cost fossil fuel projects.

Professor Lord Stern of Brentford, Chair of the Grantham Research Institute on Climate Change and the Environment, said:

“Smart investors can already see that most fossil fuel reserves are essentially unburnable because of the need to reduce emissions in line with the global agreement by governments to avoid global warming of more than 2°C. They can see that investing in companies that rely solely or heavily on constantly replenishing reserves of fossil fuels is becoming a very risky decision.

“But I hope this report will mean that regulators also take note, because much of the embedded risk from these potentially toxic carbon assets is not openly recognized through current reporting requirements.”

The report raises serious questions as to the ability of the financial system to act on industry-wide long term risk, since currently the only measure of risk is performance against industry benchmarks.

“Fossil fuel companies are currently facing a carbon budget deficit. Pretending business models reliant on more carbon emissions fit with increasing carbon constraints is the equivalent of the emperor’s new clothes. It is time investors and regulators started looking more closely at how capital is being spent.”

“Institutional investors are currently driven by whether they are outperforming the market, rather than understanding the value that is at risk. More forward-looking financial indicators are required if investors are to translate climate change risk into investment decisions.”

In February 2012, following engagement by Carbon Tracker and a number of financial and environmental stakeholders, the Bank of England recognised climate change as a potential systemic risk and committed to provide twice yearly reports on exposure to it. However, as yet no mention has been made of climate change risk in these reports. The new analysis is a clear signal that carbon assets pose a systemic risk to financial stability. As such, Carbon Tracker and Grantham are publicly calling for regulators to stress test reserve levels and production plans against the 2°C scenario and report back on the status of the market.

Further quotes from the senior oil & gas industry finance experts and MPs, can be found here: