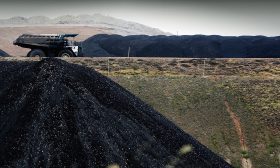 The US Coal Crash – Evidence for Structural Change

New York/London, March 24 – The market for thermal coal is in structural decline in the United...

"The collapse in the share prices of the US coal sector 2011-14 is an illustration of how markets can punish investors in a climate-constrained world where lower carbon technology is developing rapidly,”

The roof has fallen in on U.S. coal, and alarm bells should be ringing for investors in related sectors around the world. These first tremors are amongst the clearest signs yet of a seismic shift in energy markets, as high carbon fuels are set to be increasingly outperformed by lower carbon alternatives.

New York/London, March 24 – The market for thermal coal is in structural decline in the United States.

Squeezed out by an abundance of cheap shale gas and ever tightening pollution laws, it may be a harbinger of things to come for other fossil fuel markets globally.

A new report published today by the London-based Carbon Tracker Initiative entitled The U.S. Coal Crash – Evidence for structural change, paints a bleak picture and makes grim reading for investors. It finds that in the last few years U.S. coal markets have been pounded by a combination of cheaper renewables, energy efficiency measures, rising construction costs and a rash of legal challenges as well as the shale gas revolution.

“Cheap gas has knocked coal off its feet, and the need to improve air quality and ever-lower renewables costs has kept coal down for the count,” said Carbon Tracker’s senior researcher, Luke Sussams, who co-authored the report.

The slump in coal prices has driven at least two dozen coal companies into bankruptcy in the last three years alone, including major producers like James River Coal and Patriot Coal Corporation, after many of the worst performers — who betted on an upturn that never came — made acquisitions and borrowed heavily.

Many companies have lost 80 percent of their share value in the same period, including coal colossus, Peabody Energy Corp. The Dow Jones Total Market Coal Sector Index is down 76 percent in the last five years compared with the Down Jones Industrial Average that grew by 69 percent in the same period. The risk for passive investment funds, including some of the big pension funds is particularly acute given they track the indices and would have followed Peabody’s share drop regardless, until it fell out of the S&P 500 Index in September.

“We’ve known for decades that coal posed serious health and environmental risks, but now coal has also become an investment risk as countries take serious actions to clear their air and protect the climate,” said Andrew Logan, director of the oil and gas program at Ceres, a non-profit sustainability organization.

“Investors have been pushing for coal and other fossil fuel companies to face facts and adapt their business models to thrive in a carbon-constrained world.”

The financial think-tank says the fate of US coal should serve as a warning to investors in other fossil fuel markets worldwide who fail to prudently read a structural shift away from hydrocarbons and blindly continue to invest in assets that are in increasingly in danger of becoming stranded. Earlier this month the International Energy Agency said that for the first time in 40 years CO2 emissions had stalled in 2014, a development that was not tied to a downturn in economic growth. It attributed the fall to changing patterns of energy consumption in China and OECD countries with the use of renewables and greater energy efficiency measures cited as contributing factors.

“The roof has fallen in on U.S. coal, and alarm bells should be ringing for investors in related sectors around the world,” said Andrew Grant, Carbon Tracker’s financial analyst and report co-author. “These first tremors are amongst the clearest signs yet of a seismic shift in energy markets, as high carbon fuels are set to be increasingly outperformed by lower carbon alternatives.

The coal case study is insightful because it shows how one of the biggest and most advanced economies in the world can decouple growth from coal-based power in a short space of time. It also highlights how domestic policy initiatives and seismic energy market shifts can quickly conspire to derail a once flourishing business model, even without a global climate deal, or federal carbon price.

To recap, U.S. coal has been knocked heavily by the following factors:

The industry’s plan B, to export production to assumed perennial growth markets in Asia, has also floundered amid a global market awash with supply from other countries and weak demand; Chinese coal consumption fell nearly 3% in 2014 while India, the world’s third largest buyer, says it may stop imports of thermal coal in the next three years With domestic markets collapsing and no lifeline from abroad, 264 [1]US mines were closed between 2011 and 2013.

In the future, international investors should be wary of structural rather than cyclical decline in fossil fuel markets like coal. This pattern is spreading across the globe, and poses an existential threat to the business models of companies focused on coal. Carbon Tracker’s “Coal supply Cost Curve” study published last year found that globally approximately $142 billion of future investment (capex) in coal mines for export to 2025 requires a $75 per tonne breakeven price to make a return.

“The collapse in the share prices of the US coal sector 2011-14 is an illustration of how markets can punish investors in a climate-constrained world where lower carbon technology is developing rapidly,” said Mark Fulton research advisor to Carbon Tracker and formerly head of research at Deutsche Bank on climate.