Oil and gas companies, long predictable and averse to change, have even managed to defy expectations by announcing various plans to become Paris-aligned. Some have even adopted a language of asset stranding, breaking a long-held reluctance to look beyond the confines of business as usual.

At the same time, the flurry of merger and acquisition (M&A) activity in the North American oil and gas industry that kicked off in Q2 took nobody by surprise. With COVID-19 causing oil prices to hit rock bottom in the first half of the year, even going so far as to turn briefly negative in the case of WTI, bankruptcies among shale players came thick, with 40 North American companies filing in Q1-Q3, according to Haynes and Boone.[1] Along with the bankruptcies came, of course, murmurs of consolidation. The long-awaited rush of M&A kicked off in July with Chevron’s $5b acquisition of Noble Energy, which was followed in quick succession by a number of other high-value deals, as detailed below. In a sign of the industry’s tight liquidity, all the deals so far (with the exception of a proposed cash deal between EQT and CNX) have been entirely share-based.

Only deals with total value >$1b. EQT/CNX deal proposed only as of 24 November. Source: Bloomberg

The slew of M&A activity was predictable, not just because the prevailing oil price slump and increased level of financial distress, but also because of a recent upturn in industry costs. As figure 1 below shows, drilling and completion costs in the US upstream shale sector fell significantly after the 2014 oil price crash but have partially bounced back since and remained stagnant in 2019. 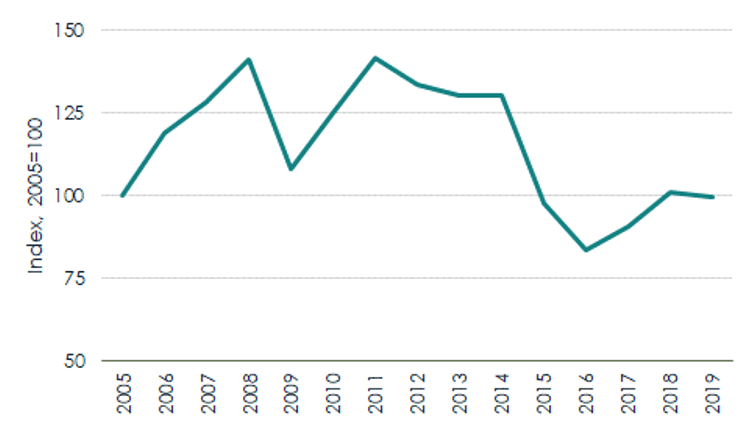 Greater or worse than the sum of their parts?

Cost savings aside, as Seb Kennedy of Energy Flux points out, companies have also made rather ambitious claims of emerging out of the deals with stronger value creation and ESG credentials than before.[2] ConocoPhillips announced its Concho takeover as part of a broader ambition to become Paris-aligned that emphasises the competitive advantage of its low-cost asset portfolio, which the Concho assets are meant to complement. Others, like Chevron, Devon and Pioneer, similarly claim the acquisitions give them access to low-cost assets with stronger returns and greater free cash flow as a result.

These two concepts – portfolio strength and ESG credentials – have a common denominator in the form of asset stranding risks. We’ve long argued that oil and gas companies should hedge against these risks by sanctioning only their lowest-cost assets, which are less likely to become stranded in a low-carbon world. The new M&A deals are an interesting proof-of-concept for companies trying to follow that line, or at least intending to demonstrate it to shareholders. Proving their commitment to shareholder value will probably be crucial to attracting funds from investors, particularly those of an ESG stripe, who have become increasingly sceptical of big-ticket projects with uncertain returns.

In the chart below, we use data from our recent report Fault Lines[3] to show how the new M&A deals will change the economics of companies’ unsanctioned project portfolios. As usual, we phrase this in terms of three IEA scenarios: B2DS (1.6°C of warming), SDS (1.65°C of warming, with the net zero point at 2070 rather than 2060) and STEPS (business as usual, or 2.7°C of warming). In order for companies to materially shift in our capex rankings, the share of capex associated with pre- financial investment decision (FID) projects fitting in the B2DS and SDS – i.e., with breakeven costs low enough to be competitive even under the significantly lower global fossil fuel demand that this scenario implies – should be higher post-M&A than pre-M&A.

Figure 2 below summarises the results of this test. The two leftmost bars show next-decade capex on new projects that fit in either the B2DS or SDS, and so are more resilient to asset stranding, expressed as a percentage of STEPS capex. The grey and red bars show capex that only fits in the STEPS or above – these projects are more likely to become stranded in a low-carbon world. Because this is an exercise in identifying potentially stranded assets, we focus on pre-FID (unsanctioned) assets – those already producing are assumed to stay on regardless of future demand outcomes since their capital is already sunk. 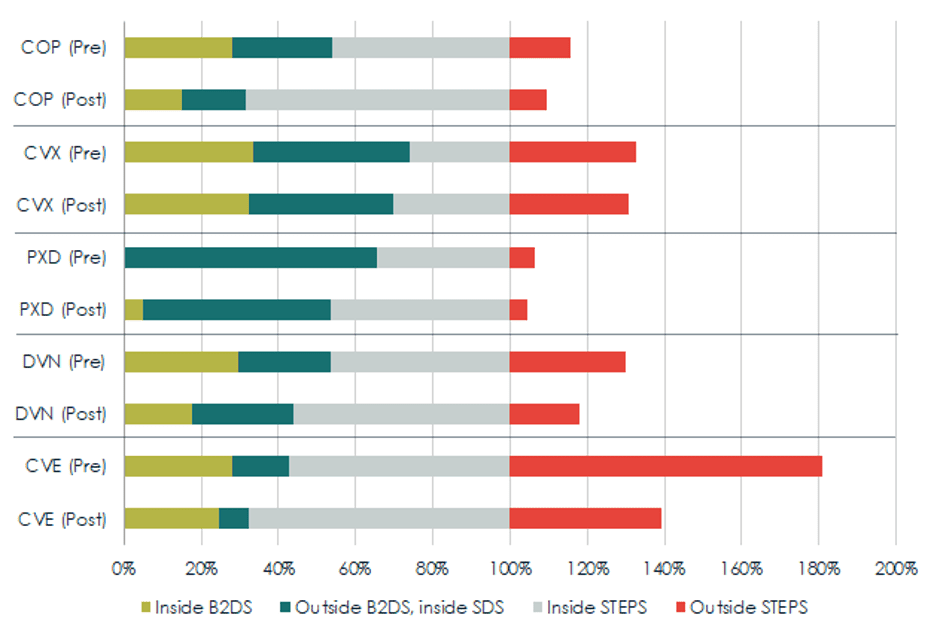 Most companies perform poorly, with four of the new, combined entities having lower shares of capex associated with new B2DS-aligned projects. Only the Pioneer-Parsley tie-up would increase the relative share of B2DS capex, though at the expense of SDS capex. Indeed, all five new entities would have lower shares of potential capex within the SDS than before. The percentage point changes in the relative shares of capex that fit within any given scenario are summarised in figure 3 below. 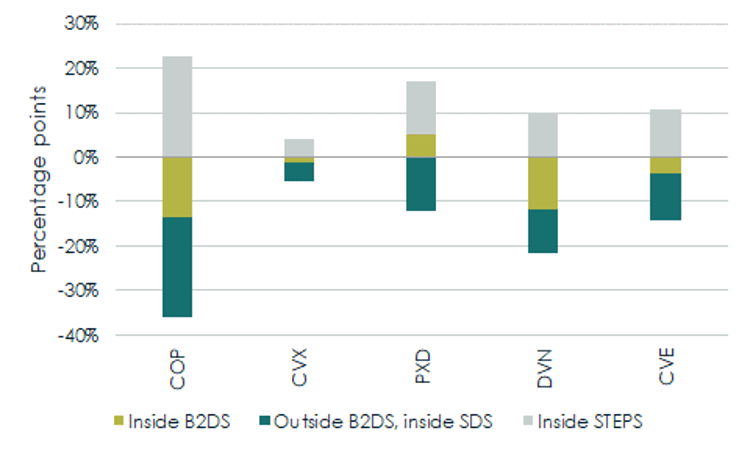 Synergies as a remedy of last resort for stranding?

Given that simply combining assets looks unlikely to reduce stranding risks, companies will need to rely on significant synergies to reduce project portfolio costs. Expectations are certainly high: in some cases, operational cost savings are expected to be as high as 10% of the total deal value – see figure 4 below.

Figure 4: Planned Synergies in $M and % of Total Deal Value 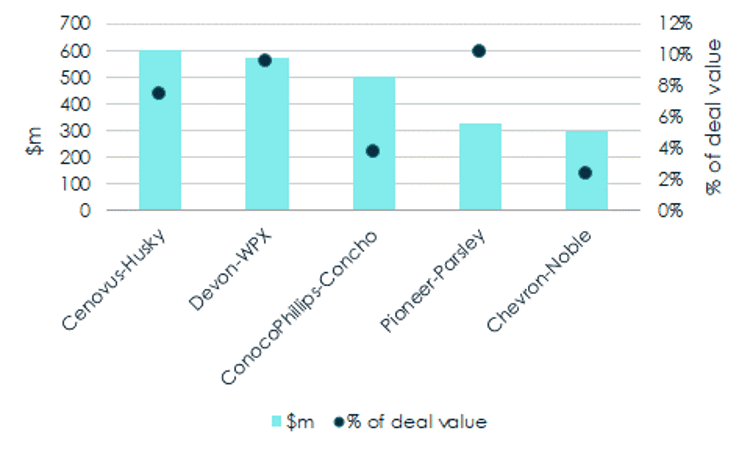 Whether these savings can be achieved is a different story. Costs are still lower than they were prior to the 2014 oil price crash and it could prove difficult to find much more fat to trim – the IEA expects US shale costs to fall by just 6% in 2020, compared to 25% after the last oil price crash in 2015.[4] Labour costs appear to be a likely focus point, at least to start: Chevron has said it will lay off 25% of Noble’s staff, while Cenovus has said it will fire 20-25% of its combined workforce with Husky.[5] [6] That said, it’s unclear to what extent these cuts are driven by near-term production shut-ins and more conservative capex plans rather than efficiency gains.

Anecdotal evidence from these companies’ past deals also casts doubt on the prospects of current mergers and acquisitions. When Concho bought RSP Permian for $9b in 2018 with hopes that it could eke out $2b of synergies, its own enterprise value stood at $24b. Two and a half years later, the whole business is being sold for just $13b.

Whether planned synergies occur should be a material concern for investors. Unless they are big enough to significantly reduce production costs, then stranding risks will only be concentrated in fewer, larger companies. What’s more, the risk is that acquisitions will amount to little more than attempts to seize on perceived bargain valuations to grow production, repeating the shale industry’s past mistakes. That won’t serve the acquiring companies’ shareholders and will probably put off increasingly sceptical investors demanding shale companies focus more on returns.

As the energy transition progresses, oil and gas companies will want to take care to pick up assets that make them more, not less, resilient to demand destruction and lower prices.