Unburnable Carbon refers to fossil fuel energy sources which cannot be burnt if the world is to adhere to a given carbon budget...

At the 2015 UNFCCC Paris COP, world governments confirmed their intention to limit global warming “well below 2°C” and pursue efforts to “limit the temperature increase to 1.5°C”. The upper limit of 2°C is a frequently used reference point for delineating a carbon budget...

This new analysis from the Carbon Tracker Initiative finds that the current coal reserves earmarked for the South African market, equivalent to 19.2GtCO2e, exceeds the South African Government’s ‘required by science’ carbon budget (in line with 2°C global warming) of 16.4GtCO2e for all sectors from 2010 to 2050.

In addition to these known coal reserves, this report considers the scale of unproven coal resources in South Africa. Assuming just one third of these deposits become proven reserves, this adds a further 19GtCO2e to South Africa’s domestic coal consumption.

The South African Government has committed to announce carbon budgets by October 2013. The chart below demonstrates how these quantities compare to a range of indicative budget levels. These budgets allocate two-thirds of emissions to the coal related sectors to indicate that not all of the budget will be allocated to coal; (recent data on GHG emissions sources in South Africa was not available). 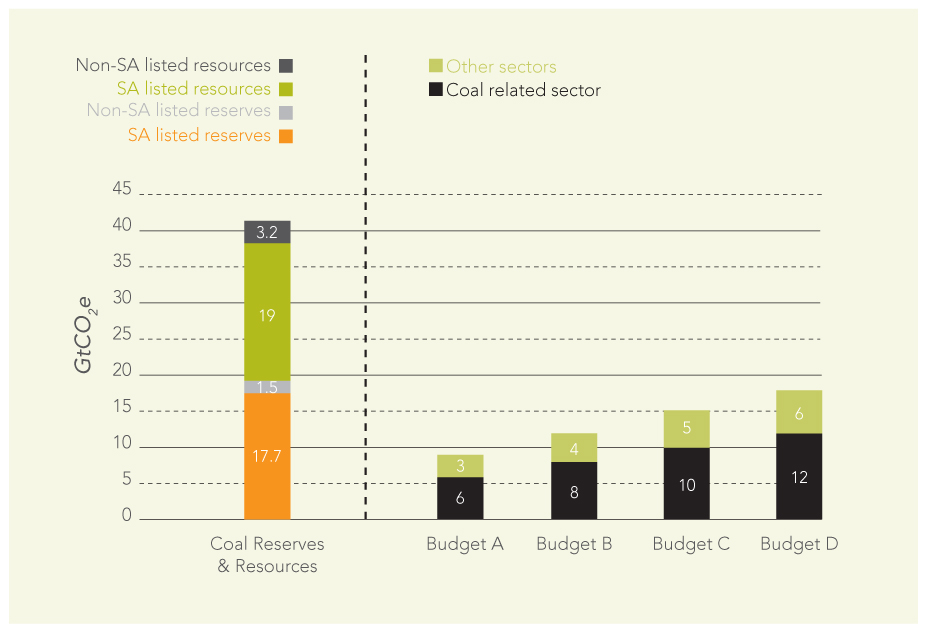 It is evident that coal reserves earmarked for domestic use exceed even the highest carbon budget for coal-related sectors. Therefore allocating capital to developing further resources in South Africa is not aligned to keeping to a carbon budget.

Distribution of reserves listed in Johannesburg:

This analysis reveals that companies listed in South Africa have coal reserves equivalent to 38.9GtCO2e. As the map below illustrates, only around half of these reserves are located in South Africa. This demonstrates how a ‘South African Index’ is exposed to significant international risks. Similarly, South Africa exports around 30% of its coal. However, contracting Western markets and saturated Asian markets present an uncertain future for these coal exports. 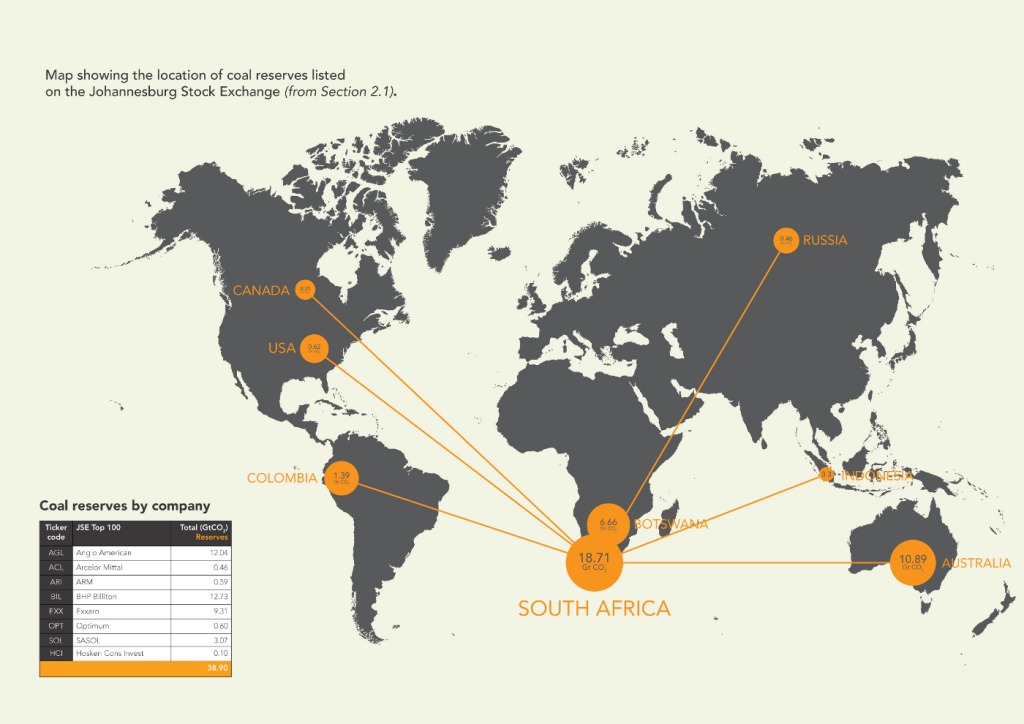 It is worth noting that South Africa is not alone in facing this challenge, with other coal producing countries such as the US, Australia and Indonesia needing to face up the global carbon budget. This was reflected in the IEA’s 2012 World Energy Outlook, which concluded that only ONE THIRD of global fossil fuel reserves can be burnt between 2012 and 2050 to give a 50% chance of achieving the 2 degree target.

This study challenges whether there is long-term value in developing further resources which are incompatible with a low carbon future for South Africa. This transition will also create opportunities for new low carbon businesses to provide access to energy. To remain within the South African Government’s required by science scenario, a concerted effort is required by the following stakeholder groups.