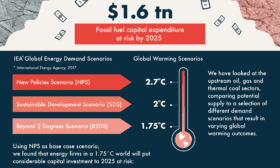 This study updates our report 2 Degrees of Separation, and for the first time quantifies risk of overinvestment under a 1.75ᵒC scenario. It was conducted as part of the ET Risk Project funded by the EU Horizon 2020 research and innovation programme.

Oil, gas and thermal coal face varying challenges and degrees of risk in a climate-constrained future. This report looks at each of these fuels in turn with a focus on the upstream end of the value chain, comparing potential supply to a selection of different demand scenarios that result in varying global warming outcomes.

The three scenarios used are drawn from those published annually by the International Energy Agency (IEA). These are the Beyond 2 Degrees Scenario (B2DS, aligned with a 1.75°C global warming outcome); the Sustainable Development Scenario (SDS, aligned with 2°C); and the New Policies Scenario (NPS, aligned with 2.7°C). Each of the scenarios assumes a 50% probability of success in achieving its respective level of warming.

In this report, we have used the NPS level of demand as an upper limit to our potential supply curves. This approach in effect assumes that companies are already aligned with this scenario, and focuses on the “surprise” or “misread” differentials down to the SDS and B2DS demand levels – the capital at risk if companies invest to deliver NPS demand but are caught out by a lower level. We would note that disclosures to date do not suggest that all companies expect long-term demand to be as low as NPS, even if capex levels have been curtailed by prices recently.

Coal has an outsized influence on CO2 emissions, producing around 50% CO2 per unit of energy more than oil and over 60% more than gas.

This effect is amplified when looking at new potential projects – no new thermal coal mines at all go ahead in the US, China, or seaborne export market, in either the SDS or B2DS.

However, absolute financial risk is dominated by the oil & gas industry due to its much greater capital intensity – oil & gas accounts for over 90% of the capex in the intervals between the scenarios which are at risk of overinvestment. Who Owns the Risk?

For oil & gas, it is clear that private sector companies and part-listed NOCs have the greatest exposure to the tranches of capex/production lying in the higher risk categories. State-controlled entities that aren’t publicly listed account for just 12% of oil & gas capex in the gap between B2DS and NPS. Oil & gas demand destruction is therefore disproportionately an issue for private investors in capex terms, despite the majority of global reserves being held by national oil companies.

Thermal coal is dominated by state-controlled domestic supply (Chinese and to a lesser degree Indian). However nearly half of the capex of private sector companies falls into the gap between NPS and B2DS demand levels