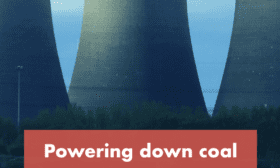 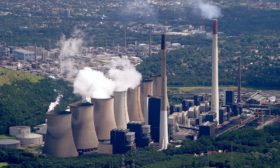 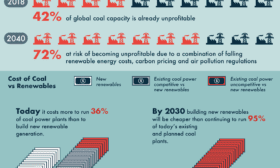 Powering down coal: navigating the economic and financial risks in the last years of coal

This infographic accompanies our report Powering Down Coal, which is a global analysis of the changing...

This interactive portal and accompanying report track the economic and financial risks of coal power at the asset-level throughout the world. 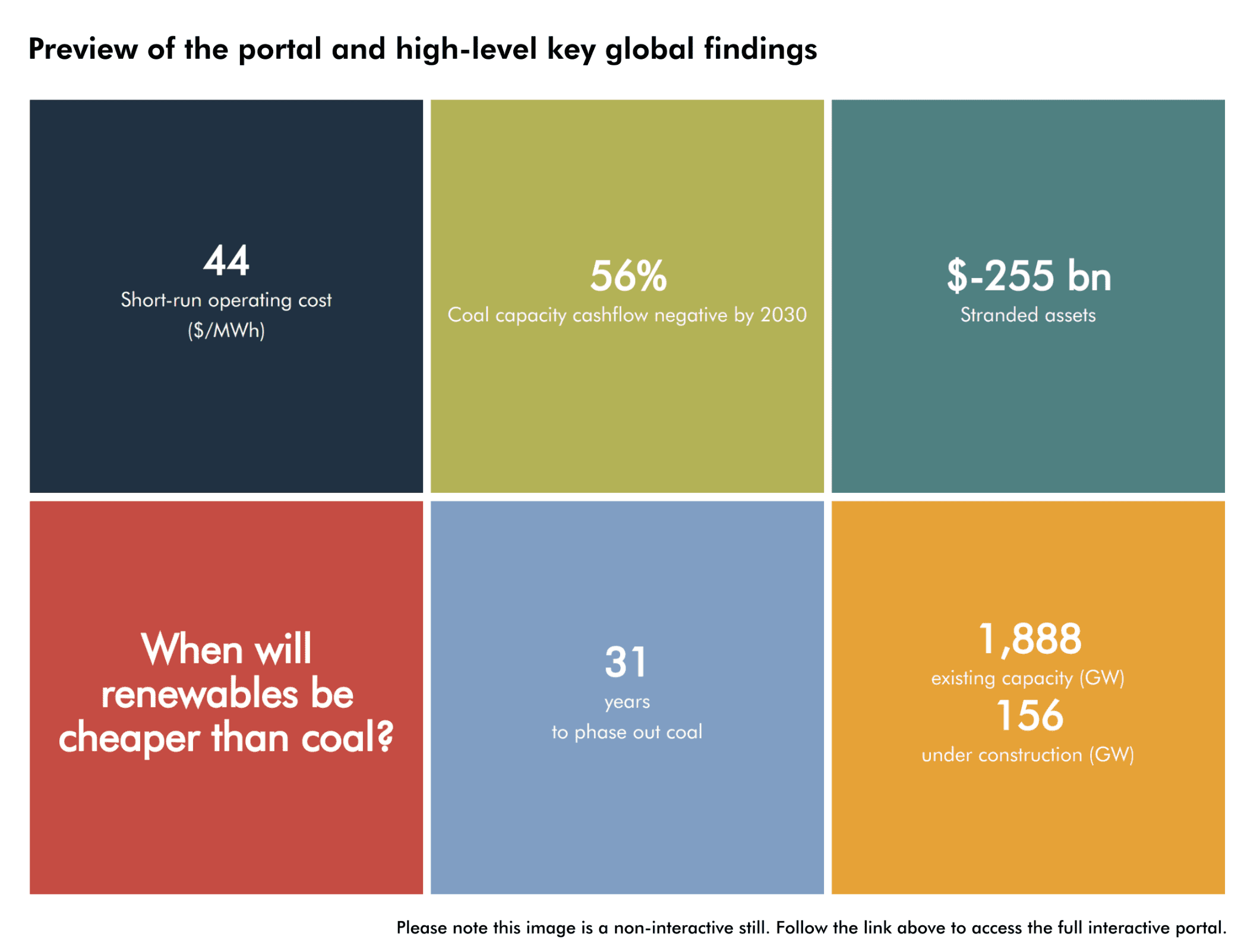 Follow the link above to use the interactive portal, view the data by company, country or region and download the report. This portal covers 6,685 coal units which represent ~95% (1,900 GW) of global operating capacity and ~90% (220 GW) of capacity under-construction. The portal provides current and forward-looking estimates of the (short and long-run) operating cost, gross profitability, relative competitiveness, phase-out year and stranded asset risk in a below 2°C scenario.

Where profitability is defined as revenues minus long-run operating costs, our analysis finds that due to high fuel costs 42% of coal capacity operating today could be losing money. From 2019 onwards, we expect a combination of renewable energy costs, air pollution regulation and carbon pricing to result in further cost pressures and make 72% of the fleet cashflow negative by 2040. This scenario assumes fuel costs will fall over 10% (on average) after 2018 and only includes existing climate and air pollution policies. This will likely prove too conservative, especially due to the continued politicisation of air pollution.

In liberalised markets where power generators are subject to competition, coal capacity will be forced to shut if out-of-market payments cannot be secured or environmental regulations are not reduced or delayed. In regulated markets where governments typically approve and pass on the cost of generation to consumers, politicians have four options: close high cost coal, subsidise coal generation, increase power prices to make coal viable, or subsidise power prices. Over the long-term coal power will become a net liability and those politicians in regulated markets who remain wedded to high-cost coal will be forced to choose between subsidising coal generation and power prices (which will impact the fiscal health of the state) or increase power prices (which will hurt consumers and undermine competitiveness). There are three economic inflection points that policymakers and investors need to track to provide the least-cost power and avoid stranded assets: when new renewables and gas outcompete new coal; when new renewables and gas outcompete operating existing coal; and when new firm (or dispatchable) renewables and gas outcompete operating existing coal. Regarding the first inflection point, by 2025 at the latest, renewables will beat coal in all markets. This estimate will likely prove too conservative as policymakers introduce transparent auctions which will intensify the deflationary trend of renewables in emerging markets. The second inflection point is where coal will face an existential crisis, as originators in liberalised markets will arbitrage the delta between the wholesale power price (which is typically set by dispatchable gas and coal generators) and the cost of new investments in renewable energy. Our analysis shows that as of today 35% of capacity could have a higher operating cost than new renewables and this may increase to 96% by 2030. This disruptive dynamic is problematic for policymakers who focus on the all-in cost for the end consumer. Inflection point three is clearly outside the scope of this analysis and will likely form part of future research with local partners. The challenge for policymakers at this point is no longer whether renewable energy will be the least cost option, but rather how to integrate wind and solar to maximise system value. We define stranded asset risk as the difference between cash flows in a business-as-usual (BAU) scenario (which acknowledges existing and ratified air pollution and carbon pricing policies as well as announced retirements in company reports) and cash flows in a below 2°C scenario (which sees coal power phased-out globally by 2040). A positive stranded asset risk value means, based on existing market structures, investors and governments could lose money in the below 2°C scenario as coal capacity is cash-flow positive. A negative stranded asset risk figure means, based on existing market structures, investors and governments could avoid losses in the 2°C scenario as coal capacity is cash-flow negative. Our below 2°C scenario finds around -$267bn of stranded asset risk globally. In our business-as-usual scenario, major coal markets such as China, the US and the EU become ever more cashflow negative and thus stranded asset risk is negative. This more than offsets those regions where risk is positive, meaning the premature closure of coal consistent with the Paris Agreement is the least-cost option compared to our BAU scenario. This analysis highlights a power sector mega trend: with or without climate policy coal power is increasingly a high-cost option. A government problem with investor implications

According to our analysis, 90% of operating and under construction capacity is either regulated or semi-regulated. In both liberalised and regulated markets, the economics of power generation will continue to change much more quickly than expected and in favour of low-carbon technologies. This transition will expose governments and investors – both equity and debt – to material financial risk. Equally, governments and investors have opportunities to be agents of change and to ensure an ordered transition.

Regardless of the market structure, the continued downward trend for the costs of renewable energy will strengthen policymakers’ ability to provide consumers access to secure, affordable, and clean energy. This is particularly important for those countries who face the challenge of stimulating economic development while reducing air pollution. Moreover, commitments to renewable power over the long-term will better position governments to attract the business of multinational corporations who have already begun to gravitate towards guarantors of renewable energy supply.

Policymakers in regulated markets will be more acutely conscious than those in liberalised markets of the financial risks that will materialise from a commitment to coal power, which over the long-term will become a net-liability. Governments will be forced to choose between subsidising coal generation and power prices (which will impact the fiscal health of the state) or increasing power prices (which will anger consumers and undermine competitiveness).

The impact upon – and role for – investors also differs depending upon the market context. In liberalised markets, utility shareholders are highly exposed to the kind of market volatility that has plagued European utilities’ transition. Coal-heavy utilities in liberalised markets are at a strategic crossroads: continue to reinvest in existing coal capacity and hope governments ignore the overwhelming energy market trends and approve subsidies in the form of capacity and retirement payments; or divest and prepare for a low carbon future. Equity and bond investors of companies in regulated markets will also need to consider the extent to which they are insulated from cheap renewable power.

The orderliness of the transition away from coal power rests on policymaker and investors’ willingness to prepare. In this regard, the establishment of the Powering Past Coal Alliance offers a mechanism for government and finance to work collectively. Utility investors, particularly those operating in liberalised markets, can play a critical role in engaging with their portfolio of companies. However, power markets are political constructs and, as such, governments will need to plan well ahead of time as low-carbon technologies accelerate through the three inflection points on their way to providing electricity. If you’re not embarrassed by the first version of your product, you’ve launched too late.” – Reid Hoffman

The findings of this report are based on our coal power economics portal which is the product of a two-year modelling effort. This is the first time anyone has attempted global coverage of coal power at asset-level. While every effort was made to model capacity as comprehensively as possible, data and model anomalies are an inevitable result of the scale and scope of this project. Our objective here is simple: move first and iterate constantly. Future versions will include more accurate and comprehensive data and modelling as we undertake bespoke research in collaboration with our local partners.

Data and analysis based on inputs from various sources, including data or resultant data from Bloomberg NEF.  Please see full data sources and disclaimer. 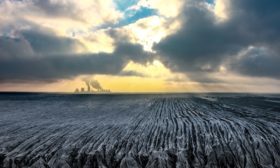 Powering down coal: The economic case for a...

Coal power is losing its economic footing. As detailed in Figure 1,...

Coal – the elephant in the room in...

Arriving into Katowice Poland, host city for COP24, you were...