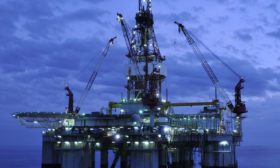 This report, produced by Carbon Tracker, Principles for Responsible Investment (UN PRI) and leading institutional investors, is the first to rank 69 of the biggest oil and gas... 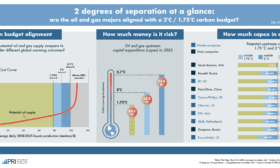 2 degrees of separation at a glance: are the oil and gas majors aligned with a 2˚C / 1.75˚C carbon budget?

These infographic updates the  findings of our '2 Degrees of Separation report', produced in partnership...

This report updates our 2 Degrees of Separation report, published in June 2017

2 Degrees of Separation laid out a framework for estimating relative transition risk to a universe of major oil & gas producers, looking through the lens of capital expenditure that might in future be committed to high cost projects that would be outside a 2°C pathway for their products – a 2°C “budget” in aggregate.

In response to user feedback, we have made some tweaks to the methodology. In general, these are consistent with the methodology used in Carbon Tracker’s report Mind the Gap, published in March 2018.

We have also limited the inclusion of high-cost projects in this iteration. We have done this by limiting our curves of potential supply by reference to another IEA scenario – the New Policies Scenario (NPS). The NPS is the IEA’s central scenario, assuming no further climate policy developments beyond those already enacted or announced, and is consistent with a temperature rise of 2.7°C (again, based on a 50% probability). Any high-cost projects above this level have been assumed not to go ahead and therefore excluded from the main metrics in this analysis. The nearly year and a half period since the last data update demonstrates the effects of corporate activity and a continued feed-through of industry cost deflation into the data. The latter factor has resulted in significant reductions to the marginal breakeven costs (used as the dividing line between in/out of a given budget) in some markets, but with effects varying throughout industry. This may be manifested for example in a project which was previously considered inside the budget now being forced out by competitive supply having experienced greater reductions in costs.

Accordingly, as would be expected, there have been some material moves in relative positioning since the previous 2 Degrees of Separation report (see report for full table).

Reasons for these movements for a given company vary, but generally fall into one or more of several broad themes: