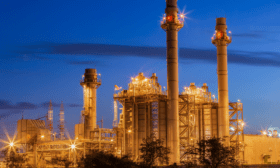 LONDON, February 10 — Poland is planning a new generation of gas power plants which will undermine EU climate targets and only be viable because of subsidies that could cost taxpayers nearly $4.5 billion, warns a new report from the financial think tank Carbon Tracker launched today.

It calls on Poland to replace polluting coal plants with renewables not gas, revealing that it is already cheaper to produce energy by building new solar farms and onshore wind than new combined cycle gas turbine (CCGT) units. By 2025 solar and onshore wind supported by battery storage will be cheaper than gas.

Polish taxpayers will subsidise the construction of five new gas plants due to begin operation between 2023 and 2027 through guaranteed 17-year capacity market payments that will cost nearly $4.5 billion. The report finds that the plants are only economically viable because these payments are much more generous than capacity payments in other European countries.

The five plants will have a combined capacity of 3.7GW, more than doubling Poland’s gas power capacity. But the report finds that for Poland to achieve net zero emissions by 2050 they would have to close after an average of just seven years, costing developers more than $200 million.

Poland’s Energy Dilemma warns that pursuing gas threatens the country’s energy security and could lock consumers into high prices. “With wholesale gas market prices having reached record highs over the past 12 months and rising political tensions in Europe increasing the threat that supplies could be weaponised or placed under international sanctions, now is not the time for nations to be increasing their dependence on gas,” it says.

It calculates the levelised cost of energy (LCOE) – the average cost of each unit of energy generated over the lifetime of each plant – for new renewables and for the five gas projects. It finds that all five projects will be more costly investments than either new onshore wind, offshore wind, or solar farms, as shown in Figure 1 below.

Falling costs of clean technologies and rising costs of gas mean that the 750MW Grudziądz project will be uncompetitive from the day it opens in 2027. By then even offshore wind with storage will generate electricity more cheaply. 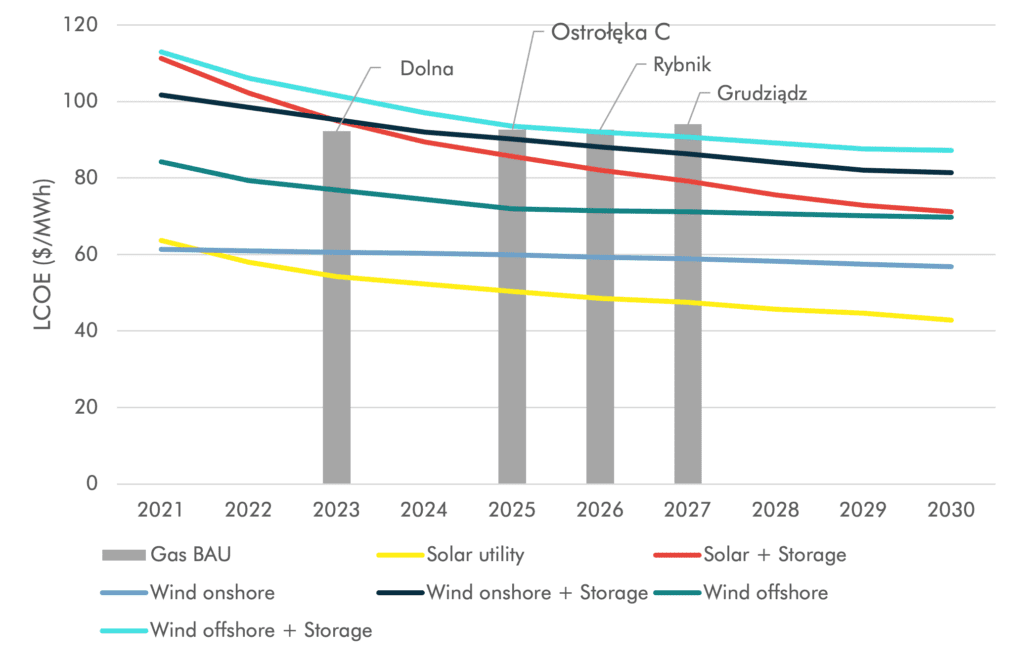 The report calls on policymakers to cancel new gas plants. If they run for planned 30-year lifespans it will be impossible for Poland to meet net zero by 2050. If they are retired early in line with climate targets developers will face heavy losses and could launch compensation claims against the government.

It warns that overly generous capacity payments are distorting the market and plants would not be built without them. Taxpayers should not be locked into subsidising projects that may struggle to run their full lifetimes, and funding would be better spent to accelerate investment in renewables.

It says the role for gas within the European power system should be to provide backup power supporting renewables. This is better served by smaller scale peaking units than large CCGT plants.

The Polish government last year acknowledged the country’s capacity for offshore wind development in its energy policy plan for the next two decades. It identified potential for just under 6GW to be built by 2030, if the first projects can launch by 2026 as planned, rising to 11GW by 2040[1].

Once embargo lifts report can be downloaded here: https://carbontracker.org/reports/polands-energy-dilemma/

The Carbon Tracker Initiative is a not-for-profit financial think tank that seeks to promote a climate-secure global energy market by aligning capital markets with climate reality. Our research to date on the carbon bubble, unburnable carbon and stranded assets has begun a new debate on how to align the financial system with the energy transition to a low carbon future. http://www.carbontracker.org

[1] Energy Policy of Poland Until 2040 – Polish Ministry of Climate and Environment, page 63