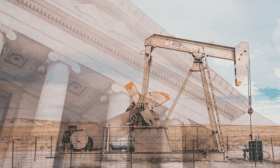 Report author Mike Coffin, senior analyst oil, gas & mining said: “It’s in the interests of all nations to minimise global temperature rise and this means rapidly reducing our use of fossil fuels. But many countries are heavily reliant on oil revenues – the time to act on rebalancing their economies is now. Waiting for demand to fall will be leaving it far too late.”

Nations must act now to diversify economies and support livelihoods

LONDON/NEW YORK, February 11 – Oil and gas producing countries face a multi-trillion dollar hole in government revenues over the next 20 years as the world decarbonises, with some needing strong international support to diversify their economies and avoid social and political instability, finds a report from Carbon Tracker released today.

For the first time it calculates that 40 petrostates could face an average 46% drop in expected revenues from oil and gas if demand falls in line with tightening global climate policy and technological advances – a shortfall of $9 trillion.

Many of the world’s biggest oil and gas producers including the US, UK, Netherlands, China, India and Brazil also face major falls in revenues but they are not a focus of the analysis because their economies are less dependent on oil and gas. Worldwide, all oil producing countries risk collectively losing $13 trillion by 2040 compared with industry expectations, a 51% drop.

Report author Mike Coffin, senior analyst oil, gas & mining said: “It’s in the interests of all nations to minimise global temperature rise and this means rapidly reducing our use of fossil fuels. But many countries are heavily reliant on oil revenues – the time to act on rebalancing their economies is now. Waiting for demand to fall will be leaving it far too late.”

Beyond Petrostates: The burning need to cut oil dependence in the energy transition calls on petrostates to act now to reduce their dependence on oil and gas revenues, by cutting public spending, raising new taxes, and restructuring their economies. It warns that continuing to invest in new oil and gas projects risks creating stranded assets and wasting capital that would be better spent on developing sustainable new industries.

Petrostates will minimise losses if there is an orderly wind down of production, with global supply falling in line with decreasing demand and falling oil prices. If they go it alone and seek to monetise their existing reserves while they can, oversupply is likely to destroy value for all, with falling prices quickly outweighing the benefit of increased production.

Many petrostates are already adopting measures to try to bridge the expected hole in their finances. Several Middle Eastern countries have introduced value-added taxes and, with countries like Nigeria, Angola and Iran, taken steps to reduce subsidies. Wealthy gulf states are investing in industries like renewable energy and tourism. However, the scale of the challenge is huge, and the pace of transition accelerating.

Many countries facing the biggest shortfalls are also among the poorest, have young and rapidly growing populations with least capacity to adapt their economies.

The international community can help the most vulnerable countries, for example by supporting the development of new technologies, offering technical assistance for regulatory and tax reform, and providing capital.

The report notes that it is in the international community’s interest to help petrostates successfully navigate the energy transition. Reducing their dependence on fossil fuel production will make it easier for the world to meet global climate targets, and also help these countries avoid instability and social unrest as the global economy is decarbonised.

Financial support to help developing countries reduce emissions and adapt to climate change is already a hot topic in the run-up to the COP 26 climate summit. In 2009, rich countries pledged to provide $100 billion of climate finance a year from 2020, but they have yet to meet this target. Beyond Petrostates focuses attention on the wider issue of supporting governments to wean their finances off fossil fuel revenues.

The report is a wake-up call to petrostates and international policymakers that have based their planning on industry and OPEC forecasts that demand for oil will increase through to 2040, and a long-term price of $60 a barrel or higher. Carbon Tracker warns that demand will have to fall to meet climate targets, and explores changes to government revenues if global temperature rise is limited to 1.65°C and oil prices average $40 a barrel.

Governments in oil and gas producing countries make money from oil in two ways: revenues from state-owned National Oil Companies, which produce 55% of the world’s oil; and taxes and fees from private sector fossil fuel companies. The report identifies the 40 countries with the greatest fiscal dependence on these revenues, analyses the proportion of current revenues at risk, and identifies which are most vulnerable.

It reveals that many countries would see a drastic fall in total government income compared with the average over the last five years (2015-2019):

The report notes that the oil and gas industry has been in a cyclical downturn over the past five years so its findings may be conservative. Comparisons with revenues over the last decade see even greater falls in government income.

Low production costs in some countries mean that the Middle East and North Africa will be one of the least affected regions in a low-carbon world, but oil and gas revenues to 2040 are still over 40% lower than industry expectations. Revenues fall short of industry expectations by 30% in Oceania; by 50% in Europe; by 57% in Asia; by 58% in sub-Saharan Africa; by 66% in Latin America and the Caribbean; and by 77% in North America.

The report also identifies six “emerging petrostates” with big plans to expand their undeveloped oil and gas industries against this backdrop. It warns that revenues could fall far short of expectations in a world of falling demand, highlighting the importance of pursuing low-carbon development pathways. Uganda’s expected revenues fail to materialise entirely, for example.

Carbon Tracker’s analysis assumes that weakening demand for oil and gas will mean lower prices than “business as usual”. Only projects with the lowest production costs will remain competitive, while high cost projects run the risk of becoming “stranded assets”.

It used the International Energy Agency’s Stated Policies Scenario (STEPS) to model industry expectations to 2040 along with a long-term oil price assumption of $60 a barrel. STEPS is consistent with policies announced by global governments and a 2.7°C pathway and OPEC forecasts a similar rise in oil demand.

Carbon Tracker used the IEA Sustainable Development Scenario (SDS), consistent with a 1.65°C pathway, to model supply in a low-carbon future. It used a price of $40 a barrel, roughly corresponding to a marginal breakeven price for SDS in the analysis.

Once embargo lifts the report can be downloaded here:  https://carbontracker.org/reports/petrostates-energy-transition-report/