In June, Saudi Aramco published its first ever Sustainability Report, containing details of its “net zero by 2050” target and describing its plans to reduce emissions from its operations.

As the world’s largest corporate greenhouse gas emitter – Aramco produces more oil per day than any other company and holds 15% of the world proved oil reserves – the company actions have the potential to alter the trajectory of global emissions.

Unfortunately (though perhaps unsurprisingly), the 2021 Sustainability Report is heavy on rhetoric and light on substance. Aramco’s emissions targets are a long way from Paris-aligned and the climate benefit they will have is questionable at best.

But even beyond any environmental implications, investors and stakeholders should be concerned that Aramco is dragging its feet on reducing emissions. Emissions targets are effectively a proxy for company strategy in the face of the energy transition.

By failing to plan for a low-demand world, Saudi Aramco risks making investment decisions based on future revenue projections that may not materialise.

Compared with its western peers, Saudi Aramco has been late to enter the fray of emissions targets. The company released its first one in late-2021, promising to achieve “net zero emissions by 2050”[ii]. In its new Sustainability Report, the company supplemented the target with an interim target, which at first glance would appear to reduce overall emissions: a 52Mt CO2 equivalent reduction in GHGs by 2035[iii]. The report also includes a new upstream-specific target, under which Aramco intends to reduce the carbon intensity of its upstream assets by 15% by 2035.

… but these targets are still a long way from Paris aligned

While the news of the world’s largest oil producer committing to “net zero” was sure to grab headlines, a closer look reveals that its targets are far from climate aligned. As part of our Absolute Impact series, Carbon Tracker has developed a methodology to assess corporate emissions targets; our ‘Hallmarks of Paris Compliance’ (see Box 1). Despite Aramco purportedly “support[ing] the objectives set by the Paris Agreement”[iv], the company’s “net zero” aim meets just one of our three requirements, and its carbon intensity metric meets none.

Aramco’s targets ignore most of the company’s climate impact

Neither target meets our first criteria, as they do not include end-use (scope 3) emissions. For producers, omitting end-use emissions is particularly problematic as 85%[v] of the full life-cycle emissions from fossil products are released at the point of combustion. As a result, Aramco’s targets cover (at best) 15% of its total emissions profile.

Nor does either target meet our third requirement, as both cover only those assets which Aramco both operates and wholly owns. They therefore exclude emissions from products that Aramco sells (and profits from) if produced in facilities that the company only partly owns. Given the scale of the firm’s foreign and joint operations, it has been estimated that Aramco could be understating the climate impact of its output by up to 50%[vi].

In Absolute Impact 2022[vii], we ranked the emissions targets of 15 of the largest listed oil and gas companies. Aramco’s neglect of end-use emissions would land it in the bottom tier, likely ranking above only industry laggard ExxonMobil. For investors, this omission means that it is impossible to fully gauge the extent to which Aramco’s business model is exposed to transition risk. It is therefore imperative that stakeholders push for the disclosure of end-use emissions and their incorporation into the company’s targets, and to insist that company goals cover the full suite of operations.

It’s worth giving some additional attention to Aramco’s “absolute” emissions reduction. The company asserts that it will reduce scopes 1 and 2 emissions by 52MtCO2 equivalent by 2035 – an amount roughly equal to Portugal’s annual emissions[viii] (see Figure 1). This is ostensibly an absolute interim target which would meet our second Hallmark. However, this is not a straightforward reduction on 2021 levels. Rather, Aramco plans to emit less CO2 in 2035 than they would in a business-as-usual scenario, accounting for the company’s planned growth in hydrocarbon production. In doing so, the reduction is best described as avoided emissions, rather than an actual decline in carbon levels.

Of course, given the clear message from the IEA that there is “no need” for new projects under its Net Zero Emissions by 2050 Scenario (NZE), it’s hard to see how any company that is continuing to sanction new projects can be viewed as aligned with 1.5°C 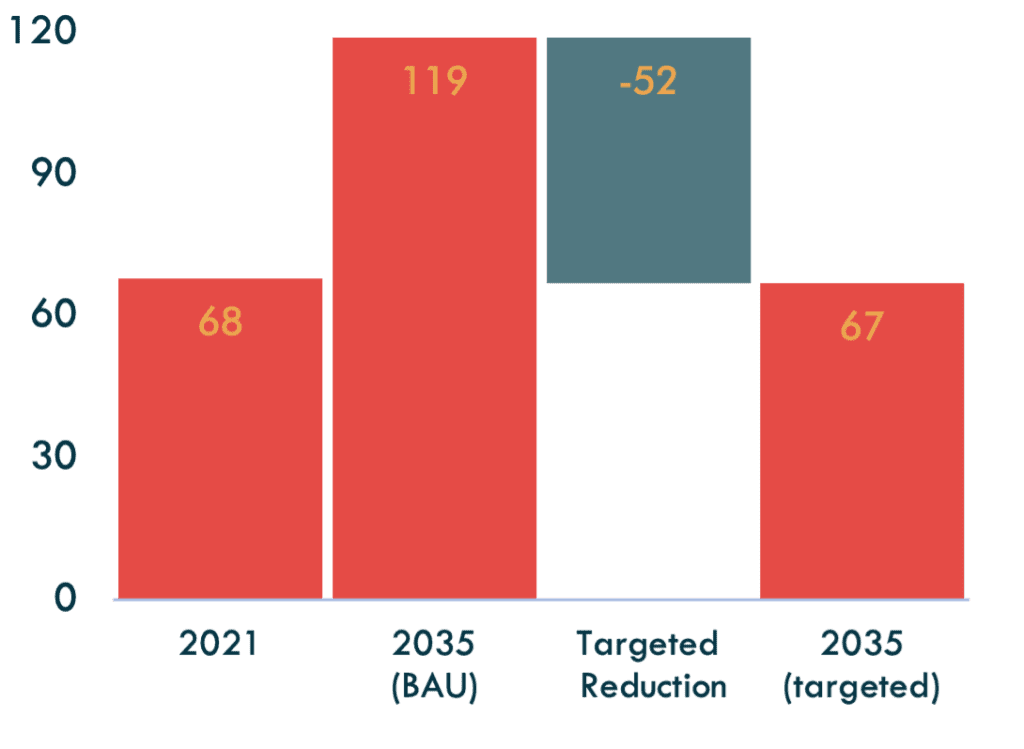 In truth, the target amounts to an intensity reduction: the firm will reduce the amount of CO2 released per unit of production such that the overall volume released in 2035 – despite an increase in barrels produced – is slightly lower than in 2021 (the figures provided in the report rather conveniently result in an absolute reduction of 1Mt of carbon dioxide). While these may be so for the emissions for which Aramco is directly responsible, its business model relies on the use of its products. Given that the company profits from their combustion, it is at least complicit in their effect on global temperature rise and thus bears at least some responsibility for them.

If we estimate figures for Aramco’s end-use emissions[2], then it becomes clear quite how negligible the reduction target is. Thanks to the company’s planned expansion in fossil output, its full life-cycle emissions are set to rise to c. 800Mt CO2 equivalent by 2035 (see Figure 2). 52Mt is then a decline of only 7% of its total carbon emissions – a much less noteworthy effort than the company would have you believe in its reporting. 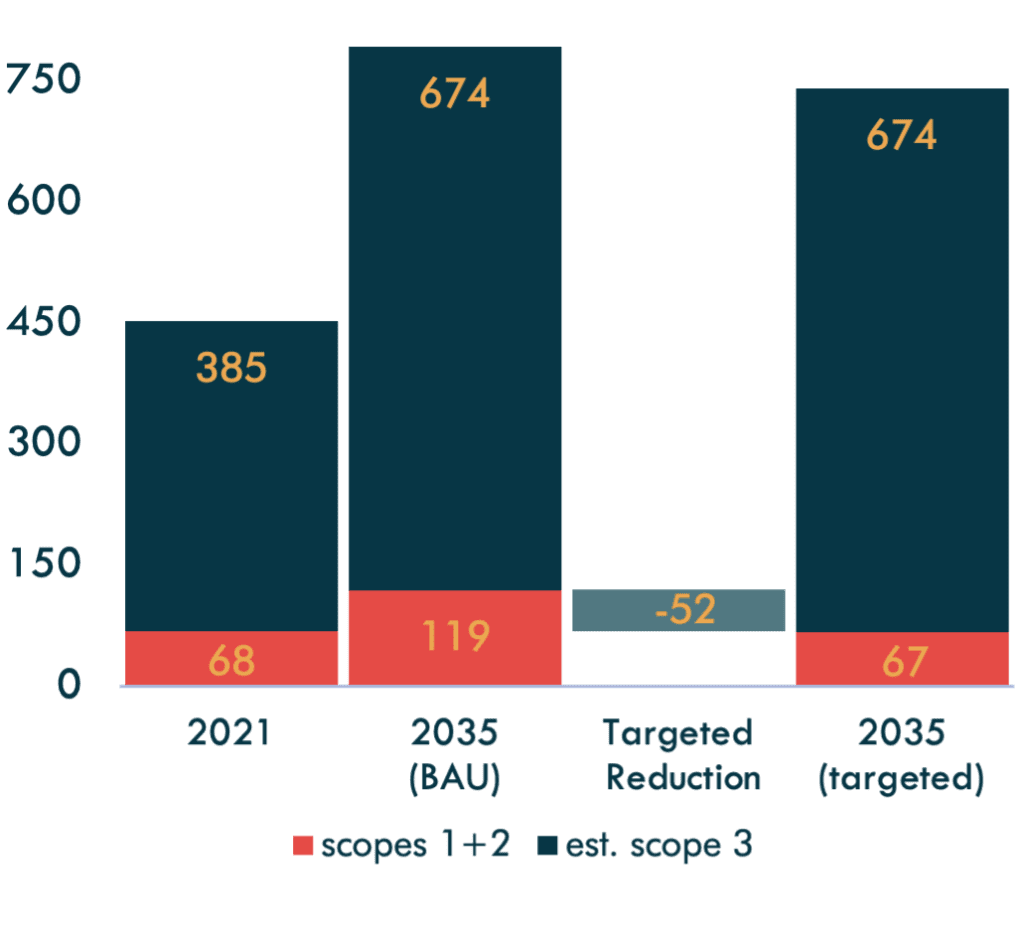 Saudi Aramco offers five “levers” which it will use to attain the 52Mt reduction (see Figure 3). Some of the saving will come from standard measures like tackling methane leakages and using more renewable energy to power its operations. However, most of the reduction – 52% – is dependent on purchasing carbon offsets and developing CCUS projects. 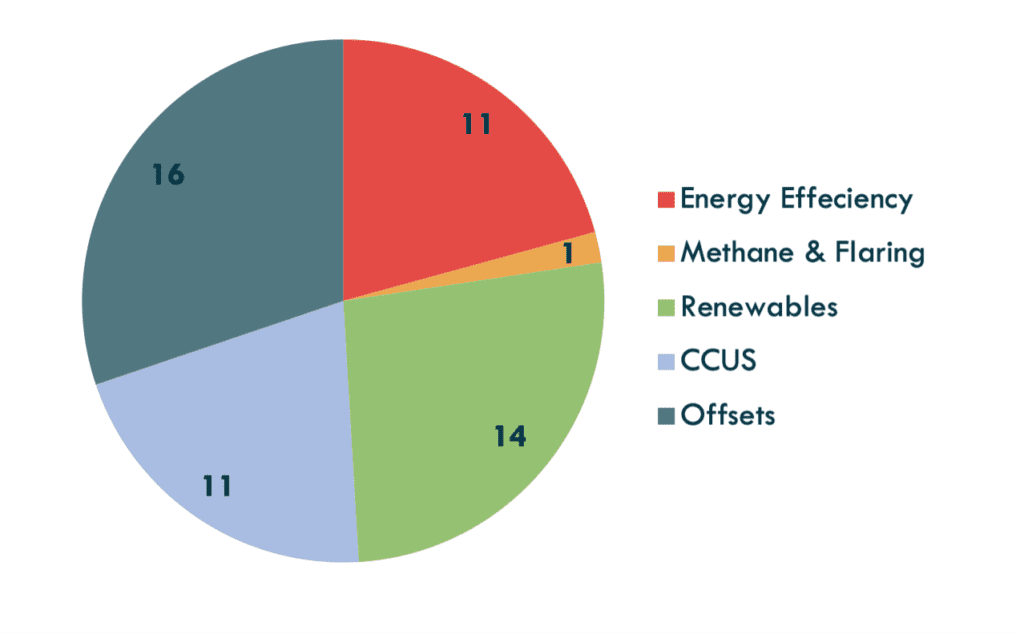 In Absolute Impact 2022, we discuss the credibility of these two approaches at length but, in short, their ability to reduce the absolute level of emissions in the atmosphere is dubious. The market for carbon credits has been mired by controversies, as lax industry standards have allowed flawed or even fraudulent credits to circulate it. Likewise, CCUS projects have faced difficulties in their execution and run the risk of delaying, rather than negating, the release of CO2 into the atmosphere.

Ultimately, given the limited global scale of carbon capture projects, credits for successfully sequestered carbon should be reserved for the economy’s hardest-to-abate industries (e.g. the manufacture of cement) rather than to ‘create space’ for more fossil fuels.

Saudi Aramco is exacerbating, not mitigating, its exposure to transition risk

The best evidence for Aramco’s relative indifference towards the financial risk posed by energy transition lies in its corporate growth strategy. The company will raise its crude oil output from 12m to 13m bbl/d by 2027 and aims to increase the gas production by more than 50% by 2030.

While Aramco has a relatively low-cost base this does not mean that it is immune from transition risk. Assets may not be stranded per se[4], they still run the risk of generating lower-than-expected revenues from new (and existing) projects well into the future, as long-term prices fall as a resulting of falling demand.

As the chief financier of a petrostate, this is particularly relevant to Aramco: our Beyond Petrostates report found that Saudi Arabia faces a potential budgetary shortfall of up to 32% should oil drop to $40/bbl under a low carbon scenario[x].  Aramco’s recent reports imply that the firm is using the current volatile macro environment to leverage its position as an oil exporter and capitalise on high commodity prices. Under the guise of providing energy security, the company is ramping up production, however if it coaxed into sanctioning new projects by the current high oil price environment – which may not see first production for many years – it runs the risk of locking itself into oil and yet further and exacerbating these risks.

The world is heading down an inevitable path of decarbonisation, and Aramco’s inaugural Sustainability Report reveals that it still has a lot of catching up to do.

[1]The report does not specify what assets the carbon intensity metric covers however we assume that, like the first target, it is limited to wholly owned operated assets.

[2]Calculated using the approximation that 85% of the emissions resulting from the production, processing, distribution and end-use of oil products result from end-use combustion (scope 3 emissions).

[3]We note that this is an illustrative calculation and assumes constant operational emissions per barrel across Upstream and Downstream. However, given Aramco’s target to reduce Upstream scopes 1 and 2 emissions intensity, then that would imply an even greater increase in production volumes that we have shown here.

Eni – the first oil company to lay out a strategy of managed decline?