The piece originally was posted to the World Economic Forum website on March 18, 2020.

The coronavirus outbreak has struck a significant blow to the Chinese economy. The severity of this hit will not only depend on the extent and depth of the outbreak, but also on the government’s response. Here is why China should avoid coal power investments when stimulating the economy after COVID-19 has been contained.

China’s previous stimulus packages and its five-year plan (FYP) policy process have historically resulted in a significant increase in thermal power generation infrastructure – and for decades, this made sense. Since 1980, economic growth in China has averaged 10% per year. If an economy grows by 10% per year, as China’s has for the past two decades, then the compound nature of that growth means that the economy doubles in size every seven years. These realities have meant it has often made sense for China to build power generation infrastructure first and ask questions later.

However, the days when China could grow at a fast pace by accumulating capital – safe in the knowledge that this capital would deliver high returns – are over. China’s next phase of economic growth will need to come from the efficient use of resources. Reforms to the energy sector will prove critical to improving China’s resource efficiency, and will need to be developed and implemented in a way that creates a safe, solvent and efficient power sector.

Independent of COVID-19, the recent circular issued by China’s National Energy Administration in the context of the 14th FYP indicates the Chinese government is prepared to relax coal power investments. China already has 99.7 GW of coal-fired capacity under-construction and another 106.1 GW of capacity in various stages of the planning process. The economic downturn caused by COVID-19 risks further loosening the planning process for coal power investments. Carbon Tracker recommends China cancels all under-construction and planned capacity immediately. This recommendation is based on the finding that around 70% of China’s operating coal fleet costs more to run than building new onshore wind or utility-scale solar PV. 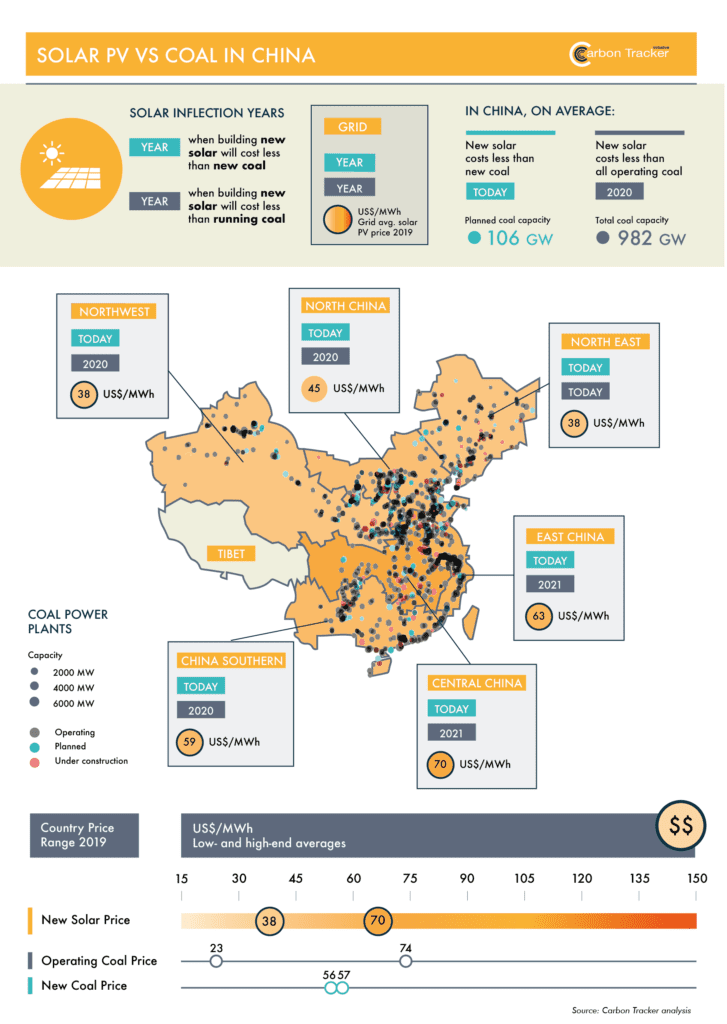 Billions of capital and carbon already at risk

According to Carbon Tracker analysis, the aforementioned planned and under-construction capacity in China has an estimated capital cost of $158 billion and could produce 23 billion tons of CO2 if built and operated for its useful life. Given this capacity will enter an already oversupplied market, it is inevitable these assets will face significant stranded-asset risk.

The process of pouring capital into underutilized assets cannot continue indefinitely. At some point the rate of return becomes so low that debt obligations cannot be met. Diminishing returns should be a serious concern for Chinese policy-makers. To illustrate how coal power investments will become less efficient and lose their viability at lower levels of utilization, the figure below compares the rate of return and generation costs with different capacity factors of an illustrative coal plant investment in China. Since a proportion of a coal plant’s running costs are fixed, a lower capacity factor means that fixed operating and maintenance costs are spread over a smaller number of operating hours. This, in turn, progressively reduces the rate of return of the project.

In theory, once the rate of return is less than the cost of capital it becomes an unviable project. The current official lending rate of the People’s Bank of China (PBC) is 4.35%. All else being equal, not only does the rate of return of coal plant investments decline, their bankability relative to low carbon alternatives decreases as well. If China moves ahead with the planned and under construction capacity mentioned above, then utilisation rates will likely be driven below the PBC lending rate, putting the country’s financial system under additional pressure from the risk of large-scale defaults. Carbon Tracker estimates the average capacity factor of the operating coal fleet is 48%, which means planned and under-construction capacity could enter the market unviable if policymakers do not rapidly retire older and more inefficient units. 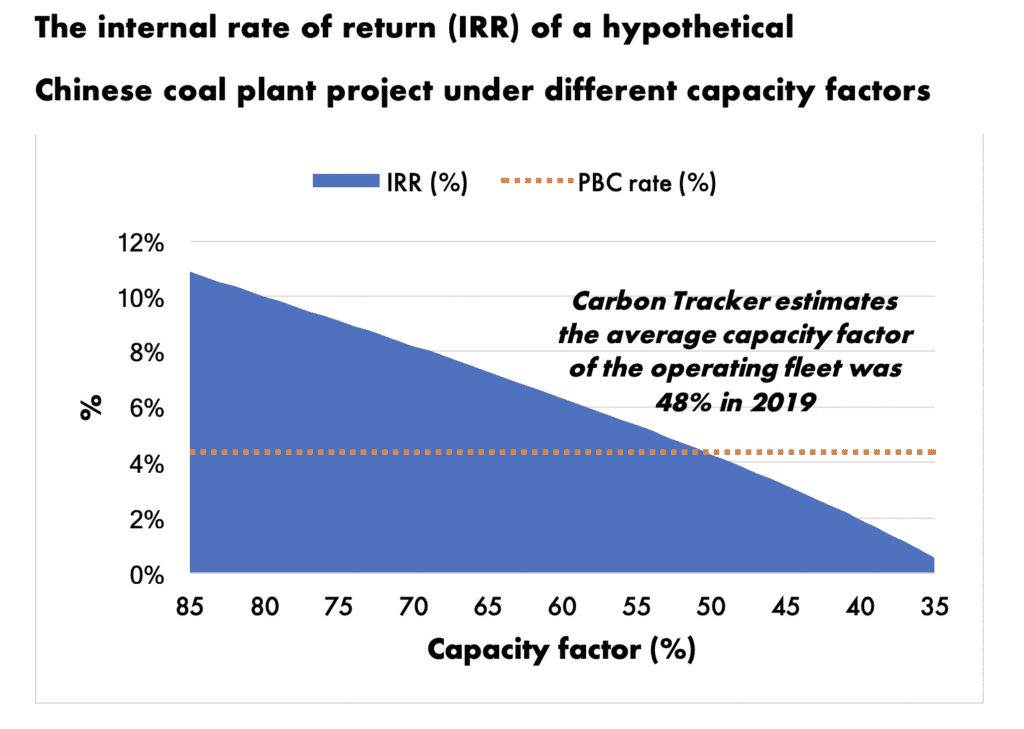 The world is currently overinvesting in a set of risky asset classes such as coal power plants, while underinvesting in the abatement technologies required to align our economies with the temperature goals set out in the Paris agreement. China’s authoritarian governance means it can deploy capital effectively and do so in a way that does not stifle innovation. Once COVID-19 is contained, the Chinese government will likely respond with conviction to reduce the economic damage caused. Indeed, the PBC has already injected $170 billion in liquidity to reassure markets. China must seize this opportunity and act on the risk by deploying stimulus capital efficiently and avoid investing in coal power – which is economically redundant and environmentally disastrous.