ExxonMobil is planning on climate failure despite ‘Advancing Climate Solutions’

Late last month ExxonMobil launched its Advancing Climate Solutions – 2022 Progress Report,[1] which describes how it is “committed to…working towards the goals of the Paris Agreement”, alongside a new “net zero ambition”.

Yet its core projection used for business planning shows it is banking on the failure of international action on climate, whilst discounting the potential for new technologies to severely disrupt the current energy mix.

These two drivers of the energy transition, policy action and technological shifts, could have huge financial implications for shareholder value; investors in oil and gas must consider how investee companies are managing their increasing exposure to these risks. To date ExxonMobil has not provided information in its financial statements so investors can understand how it is managing these risks. It is therefore imperative that investors continue to press ExxonMobil to disclose the resilience of its business model under low-carbon scenarios to protect the value of their investments, while auditors must ensure that relevant, material, information on climate is disclosed.

ExxonMobil justifies continuing investment into fossil fuels as “meeting society’s needs”, by providing “products essential for modern life” and enabling people “to live healthy, prosperous lives in an ever-changing world”. Yes, oil and gas are currently needed for a range of applications, from pharmaceuticals to lightweight polymers, but that alone will not support maintaining oil and gas production at current levels, where substitution technologies are available today, and are becoming increasingly cost-competitive.

Equally, while developing “Low Carbon Solutions” and seeking to lead “industry in hard-to-decarbonize emissions reductions” may be both beneficial and potential strategic opportunities for ExxonMobil to diversify away from oil and gas, such investments do not justify the continued sanctioning of new oil and gas projects which make no sense on neither financial nor climate grounds. Limited carbon capture and storage (CCS) potential must be reserved to decarbonise the hardest to abate sectors.

ExxonMobil is planning on global failure to meet climate goals

The progress report, which replaces its previous Energy & Carbon Summary, “outlines ExxonMobil’s commitment to driving emissions reductions in support of a net-zero future”. However, its central planning case, the Outlook for Energy[2] is anything but aligned within the goals of the Paris agreement.  This central planning case, which “reflects the Company’s view of global energy demand and supply through to 2050”, is stressed to be a projection used as a base for business planning and not just a “hypothetical scenario”.

Under ExxonMobil’s 2021 Outlook, 2050 oil and gas demand is similar to the IEA’s Stated Policies Scenario (STEPS), where global temperature rises c.2.7°C by 2100, well in excess of Paris goals (Figure 1). While energy demand is expressed in exajoules (EJ) in Figure 1, for oil and gas this is effectively a direct read across to emissions, given 85% of oil and gas life-cycle emissions result from end-use combustion. 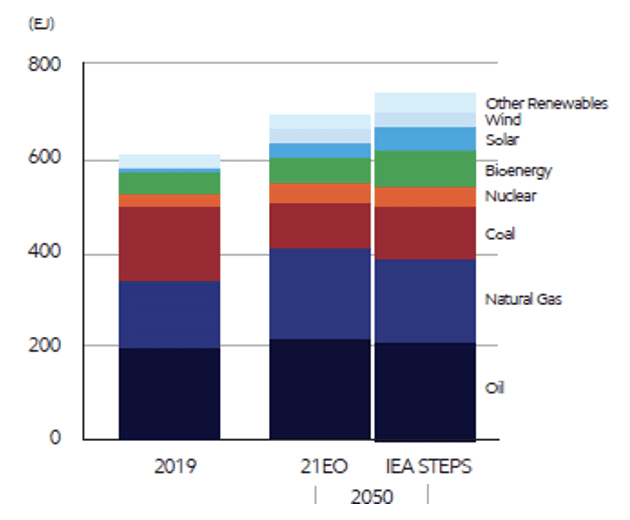 By projecting a 2050 future where fossil fuels still provide over 70% of primary energy, with absolute demand growth for oil and “natural” gas vs. 2019, ExxonMobil is massively underestimating the disruptive potential of new technologies. With rapidly-falling renewable energy costs, and the growth of enabling technologies such as battery storage, fossil fuels face ever-growing competition over the coming decades, even in the absence of climate policy action.

In ignoring scope 3 emissions, ExxonMobil fail to reflect financial risks of the transition

Alongside the Progress Report, ExxonMobil announced[3] a new emissions goal “to achieve net zero greenhouse gas emissions from its operated assets”. This, however, fulfils just one of our three Hallmarks of Paris Compliance, thus failing to link through to finite climate limits, or reflect these transition risks that investors face[4].

While ExxonMobil’s new ambition does go further than previous iterations – operational emissions are now considered on an absolute basis, and the reduction is now to reach net zero in 2050 – yet ExxonMobil continues to exclude both end-use emissions (scope 3, accounting for 85% of full life-cycle emissions) and emissions from its assets that are operated by others. Were we to update our ranking today, ExxonMobil would remain in the bottom band, with Chevron and ConocoPhillips, and below Occidental and its European peers who do have scope 3 goals.

But it’s not just that these goals fail to recognise climate impacts: irrespective of who is responsible for end-use emissions, Exxon’s core business model is still highly reliant on the release of CO2­ to the atmosphere, and exposed to the expected shifts in demand.

Take for example the decarbonisation of the automotive sector, which can be driven by both policy action (e.g. increased taxation on larger engines) and technological development (e.g. switching from ICEs to EVs[5]) – either way demand for fossil fuels is reduced.

Irrespective of individual views on the desired pace of the energy transition, it is critical that investors consider the risks to their investments under a range of scenarios, and that they are provided with the data to enable them to assess these.

The IEA has made clear there is no need for new oil and gas projects under its Net Zero Emissions by 2050 scenario (NZE, 1.5°C).  Exxon’s Progress Report considers Paris-aligned scenarios from both the IPCC and the IEA’s NZE, showing how the 2050 global energy mix (Figure 2) is radically different to ExxonMobil’s planning case – contrast this with Figure 1. 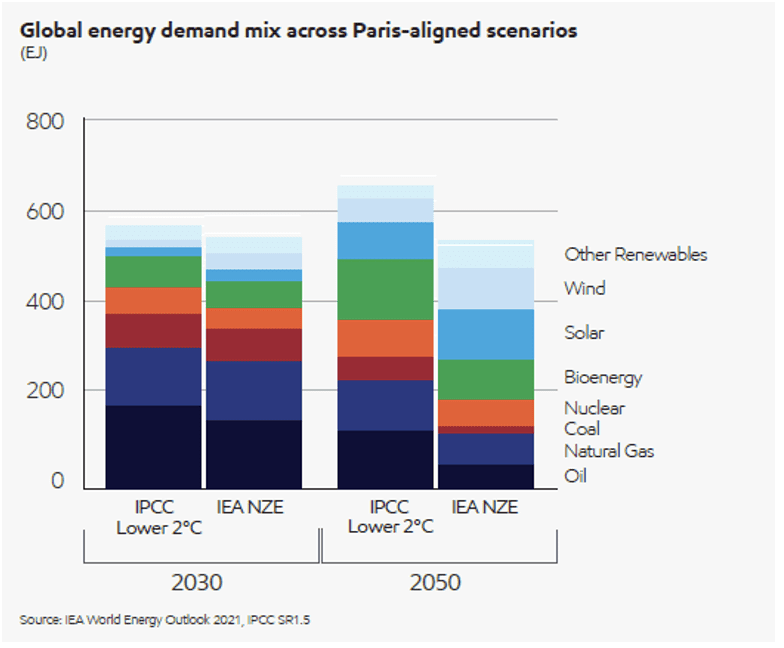 Notes: “Lower 2°C” scenarios are an average of 74 scenarios from the IPCC.

The IEA’s have said no new projects are needed under NZE (1.5°C), but this does not mean there would be no future investment required on existing assets (e.g. for maintenance or planned additional drilling); the Progress Report cites an IEA figure of $11 trillion needed to 2050 under NZE. This is an impressive sounding number, but what’s not clear, however, from ExxonMobil is what proportion of its planned capex falls within this figure, and whether any of its development options make financial sense under that scenario (and if so, why).

Even under other Paris-aligned scenarios, for example under the IEA’s Sustainable Development Scenario (SDS, 1.65°C), we see just a small proportion of industry project options as being potentially financially viable, with others, if sanctioned, running the risk of becoming stranded assets as they fail to deliver expected returns over their lifetimes. We explore this using a least-cost approach in Adapt to Survive, finding that ExxonMobil is relatively more exposed that most major peers.

…yet strategic resilience, including to NZE, is left unquantified

Of course, this is just the impact on production volumes, falling long-term demand will lead to lower long-term pricing; combined these two effects will significantly impact revenues, whether driven by policy action, technological change, or both.

ExxonMobil does acknowledge that under NZE the source of overall operated cash flows would materially shift to come predominantly from its Chemicals and Low Carbon Solutions businesses (the latter forming an immaterial part of cash flows today) by 2040, as cash flows from oil and gas indicatively fall sharply (Figure 3). Despite this, however, the impact to ExxonMobil’s current business model of NZE is not quantified.

A chart of capital expenditures out to 2050 under NZE is also shown in the report, but again only in proportional terms; it may well be that the overall scale of ExxonMobil’s business shrinks significantly under NZE. 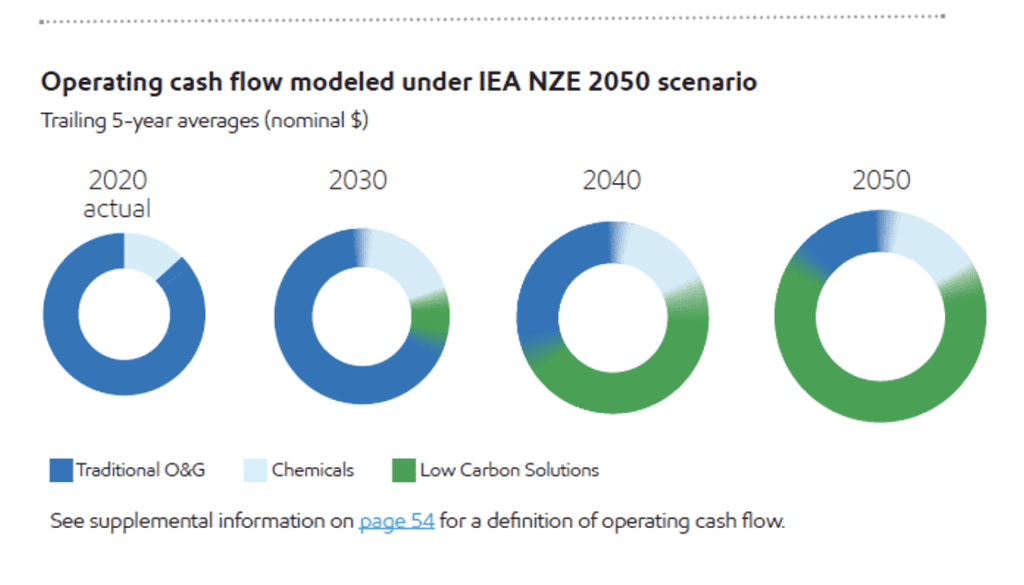 Hindsight is a luxury oil and gas producers don’t have

Claims of resilience under a low-carbon scenario require timing and foresight: strategic decisions taken now impact the fortunes of the business out to 2050 given the multi-decadal nature of expected cash flows from individual oil and gas investments. It’s all very well saying that under a low-carbon scenario “the Company would cease oil and gas exploration and reduce spending”, but capex committed in the 2020s cannot be un-spent.

Companies planning for a business-as-usual world of growing demand – as ExxonMobil is doing – risk wasting huge amounts of capital on assets that become stranded as the energy transition unfolds. Worse, basing long-term investment on short-term price signals could exacerbate this further[6].

Wouldn’t transition risks be expected to be reflected in financial statement notes?

ExxonMobil states that the “majority of reserves will be produced pre-2050”, but what matters is not just the production timeframe, but the average commodity price for which it can sell oil (and gas) during that time period. As oil demand peaks during the energy transition, long-term commodity prices will likely fall, particularly if there is a significant supply overhang as a result of overinvestment in the early 2020s.

Of course, a lower long-term price will also impact both the resources that can be classified as reserves and the profits that can be made from those that remain, and whether the company can recover the capital invested in the existing property, plant and equipment that are on the books. Despite the assessment’s stated intent to address the potential impact of a Paris-aligned scenario on proved reserves or resources, there is no quantification of this, or the resulting balance sheet impairment implications, whether in volume or value terms.

With policy action on achieving Paris goals growing, isn’t limiting temperature to 2°C at least a plausible outcome? If so, should the potential impact of this not be quantified, and if material then be included in the financial statements?

Carbon Tracker explored the inclusion of climate risk within financial statements in Flying Blind, finding significant concerns with ExxonMobil in terms of ‘consideration of the financial impacts of climate’ in both financial statements and audit reports. Specifically, it found that ExxonMobil’s reporting “did not appear to provide the information that investors sought, to any meaningful extent”. Our review resulted in significant concerns around the ‘visibility of assumptions and estimates’ in financial statements, and “Paris alignment of assumptions”. Some concerns were found in the remaining two areas relating to consistency with other reporting, mostly due to Exxon consistently not considering the effects of climate throughout its reporting.

Ultimately while ExxonMobil may be “committed to…working towards the goals of the Paris Agreement”, its core projection used shows it has no faith in global temperature being limited to 2°C or less. With no absolute or estimated financial impacts shared in these chapters, how can investors verify ExxonMobil’s resilience to Paris-aligned outcomes? To enable them to do this, it is critical that corporates disclose adequate data to make those assessments, that auditors perform their duties, and that regulators hold both to account.

[1] Available at: https://corporate.exxonmobil.com/Climate-solutions/Advancing-climate-solutions-progress-report. Page numbers cited within this piece are from this report.

[4] Our three Hallmarks of Paris Compliance are that oil and gas company emissions goals should 1) include full lifecycle emissions, 2) be bound be finite limits, including interim milestones on an absolute basis, and 3) cover emissions on an equity-share basis. We describe these further, alongside a relative ranking of some of the largest listed companies’ climate goals, in Absolute Impact 2021. Available at: https://carbontracker.org/reports/absolute-impact-2021/

Why Jordan Peterson Should Think Again on the Energy Transition

On a recent episode of Joe Rogan’s controversial and highly influential podcast,...

On Monday 9th August, the Intergovernmental Panel on Climate Change (IPCC) delivered a...