This year has seen the fundamental dynamics of global energy markets turned completely on their head.

A potent cocktail of rallying demand as economies continue to emerge from the turmoil brought about by the Covid-19 pandemic has been confronted by geopolitical upheaval that has triggered dramatic shifts in supply-side economics.

Asia has not been shielded from the effects of events in Europe on energy market prices and is now dealing with record values for liquefied natural gas (LNG) cargoes once again, as European interest in the commodity soars to escape Russian gas pipeline dependence.

For the power sector, the global gas and LNG markets’ relentless price rallies have far-reaching consequences. What was previously viewed by some observers as the lesser evil fossil fuel required to power the assets that could support the transition from coal to renewables and to provide “reliable” backup supplies to cover intermittency has been now exposed to be anything but reliable in its nature, placing much greater emphasis on national self-sufficiency.

This has brought into sharp focus the need to be taking active steps to significantly reduce dependence and exposure to global gas and LNG markets, whose prices appear unlikely to fall any time soon. Both in terms of climate ambitions and the delivery of national energy security, this is now unquestionably the best option.

Asian LNG trap must be avoided

In early-April this year, we published Stop Fuelling Uncertainty: Why Asia should avoid the LNG trap. In this report we highlighted the growing financial risks facing gas-fired power generators in Japan and South Korea, as these nations begin to align their power system planning around their net zero emissions targets for 2050, and in Vietnam where plans to build a whole fleet of new build gas plants appear increasingly unviable.

The arguments we made, emphasising that now is not the time for investors to be committing further capex towards gas-dependent projects, and that the cost competitiveness of renewables versus gas in Asia is increasingly evident, have only strengthened in the months following publication.

While we emphasised in our report that historic price volatility had already made the LNG market something which Japan and South Korea should be taking steps to reduce their dependence upon, and Vietnam should be attempting to avoid any long-term exposure to, it has become clear in recent months that prices in the near-term are only going to trend higher.

The disruption to Europe’s pipeline gas supplies from Russia has led European nations to turn towards the global LNG market for supplies. And the sharp increase in competition for LNG cargoes has in turn prompted prices for Asian buyers to spike higher. 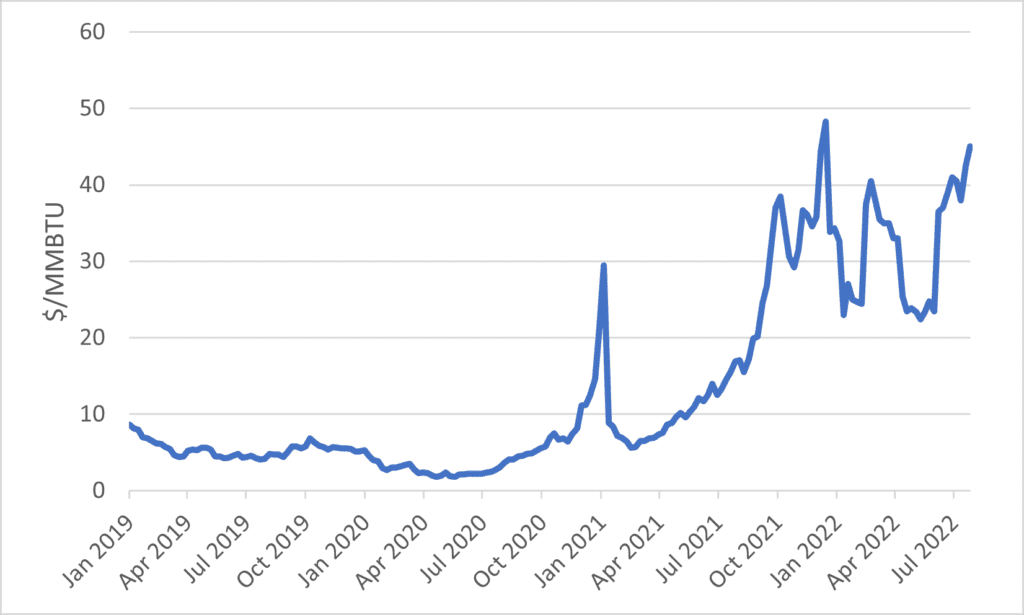 We have consequently updated our model and re-based future fuel cost inputs for gas-fired power stations in these nations on values recorded in 2021-22 (using futures markets contract prices for July-December 2022), compared with average prices in 2019-21, in which we assumed future prices would turn out in previously. This previous assumption base was chosen to reflect price volatility levels either side of the pandemic, but it has since become clear that LNG buyers are unlikely to benefit from a return to 2019 or 2020 price levels in the short to medium term.

The results of this update show that at current market prices, the window of investment opportunity in Asian gas-fired power stations is even narrower than we previously estimated, and that low-cost, low-risk renewables will erode gas units’ operating hours and profitability at a much quicker pace.

Using a 2021-22 price assumption basis, we project that in Japan, new standalone solar farm projects are already cheaper investments than either new build or existing gas-fired power stations in the country, when comparing lifetime operating costs on a levelized cost of energy (LCOE) basis. Solar with four-hour lithium-ion battery storage technology installed also now becomes cost competitive with both new and existing gas units by just 2024. This is even despite our LCOE estimates for solar being notably higher in Japan than for other nations, as the country’s challenging terrain heightens land build costs and frequent natural disasters tend to lift insurance premiums.

Our updated results also show that at current market prices for LNG, new onshore wind capacity is already cheaper to build and operate in Japan than either new build or existing gas-fired power stations. While even new offshore wind farms will outcompete both new and existing gas units before the end of this decade.

We had previously not expected offshore wind technology to become cost competitive in Japan until the mid- to late-2030s, but the continuous rise in global gas costs has pulled this inflection point much earlier. With a combination of renewables capacity – especially offshore wind which already produces capacity factors that are comparable with gas-fired power stations – and battery storage able to offer similar grid flexibility to gas both either already cost competitive or appearing likely to become so within the near future, the Japanese government can feasibly begin planning its phaseout of power sector gas use in line with its net zero 2050 target.

The chart below shows the comparison between operating costs for both existing and new gas-fired power stations in Japan. Combined costs for projects due to come online over the coming years are shown in the bars depicting LCOE for new gas by the years they are scheduled to start-up in, while we also show overall long-run marginal cost (LRMC) for operating gas units on the chart. 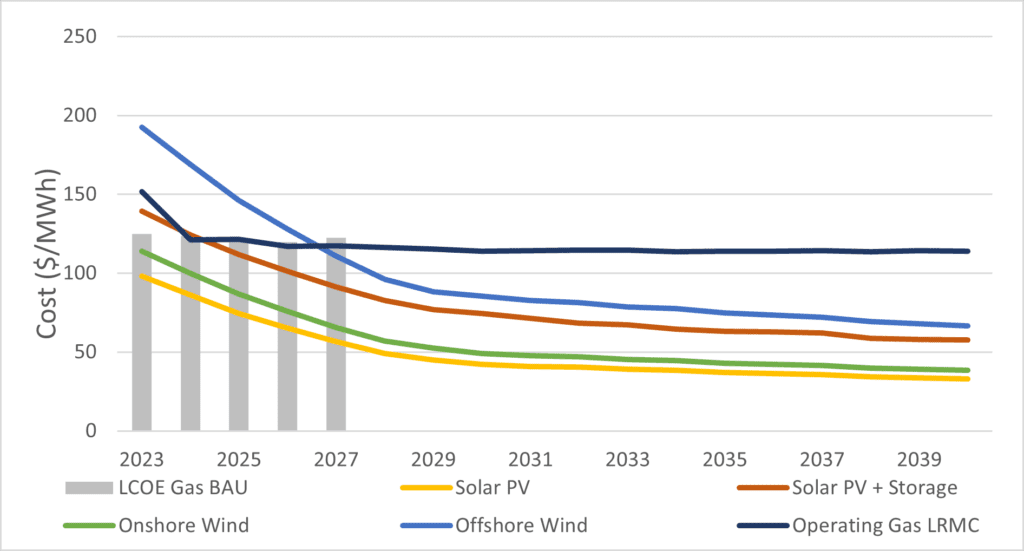 For South Korea, we had already projected that new solar farms are cheaper overall investments than new gas and that solar with battery storage capacity installed would also become cost competitive by just 2025. Using our updated assumption basis however, we now project that onshore wind farms built in the country are also already cheaper investments than new gas on an LCOE comparison basis.

We continue to project that offshore wind capacity in South Korea becomes cost competitive with new gas units in the country by 2025, while new offshore wind farms are also now projected to outcompete South Korea’s existing gas-fired power plant fleet by that same year. We previously had not expected this inflection point to come for the country’s existing gas capacity until the late 2020s. 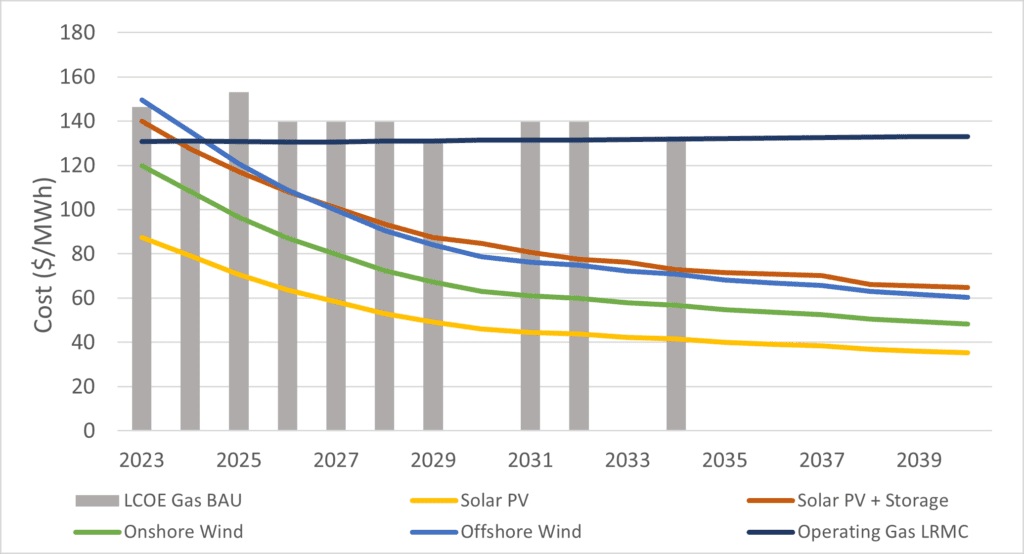 It is important to note that many gas-fired power generators in both Japan and South Korea will have secured their required LNG fuel supplies for both now and the next few years on long-term supply contract agreements at price levels significantly lower than current spot values.

We are however already seeing buyers from some sectors of Japanese industry reluctantly having to fulfil their supply requirements through spot market purchases, with Nippon Steel reportedly paying more than $40/MMBTU for a cargo in July — a record LNG import price for Japan [1] — demonstrating that not every firm is protected.

Supply contract agreements will also only protect gas plant owners within the power sector for a limited period — eventually reaching expiration or require renewing. And with most forecasts showing little sign of a likely fall in global LNG costs soon, it is seemingly only a matter of time until fossil fuel-fired power generators are exposed to today’s high prices, making the investment case for continuing to fund the long-term use of gas in these countries at the expense of renewables highly questionable.

For Vietnam, the case against starting up long-term dependence on LNG has never been clearer. We emphasised in our report that the country can steer its energy sector on course to deliver the net zero emissions by 2050 target that the Vietnamese government pledged at COP26 last year [2] by leapfrogging the gas “bridge” and instead plan for a coal-to-clean transition for its power sector.

The country risks not only building a whole fleet of new gas-fired power stations that will struggle economically from day one, but also constructing extensive new LNG terminal infrastructure which will not be used to the extent originally planned and will consequently be left at risk of stranding.

According to our updated estimates for the operating costs of the new gas-fired power stations Vietnam plans to bring online over the coming years, each one is now already projected to be more costly to run over the course of their lifetimes than even renewables with storage, and offshore wind. 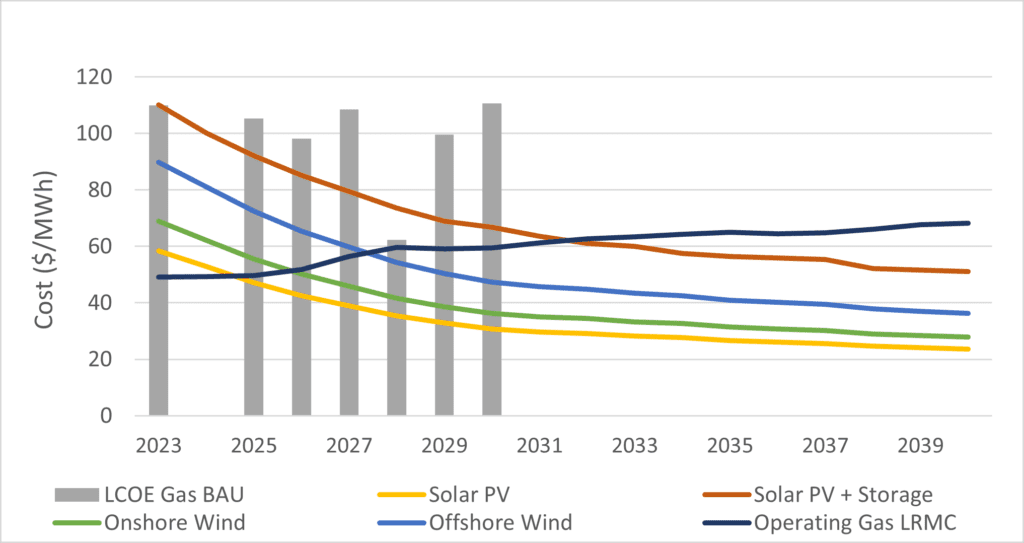 In our report earlier this year we called for the Vietnamese government to ensure the country does not miss its opportunity to make delivering net zero far more achievable by bypassing the difficulties facing other nations around the world in having to phase out both coal and gas for power generation. We urged policy makers to put in place sufficient incentives to ensure that the country’s vast potential in the renewables sector is fulfilled by allowing green technologies to compete with fossil fuels financially earlier.

While guarantees for investors in the form of CFDs would still help to incentivise final investment decisions to be made in the Vietnamese renewables sector, the rise in global gas prices we have seen in recent months has meant that the economic case for building new gas-fired capacity in the country, and globally, at the expense of renewables is no longer valid.

The UK’s energy security strategy is back at the forefront of political debate. As...