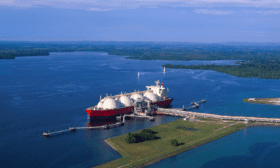 LONDON, April 08: Asian nations should pivot from reliance upon LNG gas toward renewable sources to protect...

Report author, Senior Analyst Jonathan Sims said:
‘Building new large-scale gas units in Japan, South Korea and Vietnam will unnecessarily raise these nations’ dependence on the increasingly volatile global LNG market at a time when the risks of gas market exposure have never been higher. Planning a power system centred around lower cost renewables with battery storage not only represents the best option in terms of climate target progress, but also in cutting exposure to commodity price volatility and stranding risk.’

Report author, Senior Analyst Jonathan Sims said:
‘Building new large-scale gas units in Japan, South Korea and Vietnam will unnecessarily raise these nations’ dependence on the increasingly volatile global LNG market at a time when the risks of gas market exposure have never been higher. Planning a power system centred around lower cost renewables with battery storage not only represents the best option in terms of climate target progress, but also in cutting exposure to commodity price volatility and stranding risk.’

Asia has been the primary driver of LNG demand, accounting for 95% of projected growth in 2020-22. This research focusses on Japan and South Korea – representing around one third of global LNG demand, and Vietnam, which has the largest regional pipeline of new gas power infrastructure.

Japan, Vietnam and South Korea have all declared national intentions to achieve net zero emissions by 2050, but continue to plan for a future in which unabated gas-fired units have a central role within their power systems.

Instead, planning a power system centred around renewables with battery storage will minimise exposure to commodity price risk, can be developed at lower cost than new gas, and will prevent billions of dollars of LNG infrastructure investment from stranding. These are the key findings of ‘Stop Fuelling Uncertainty’.

‘Stop Fuelling Uncertainty’ urges policy makers to grasp the immense opportunities available in the lower cost and lower risk renewables sector and highlights the extreme risks to investors of long-term gas plant investment at this juncture. Wedding the energy grid to volatile and high gas prices locks users into a worst-case outcome, when compared to lower cost and cleaner renewables.

Opportunities for renewables in Japan, South Korea and Vietnam are vast and more cost competitive than gas. New solar and onshore wind power developments in Japan, South Korea and Vietnam are either already cheaper, or will become cheaper overall investments than new gas units by 2025. Given typical planning and construction timeframes of at least four years for new gas, any units that move ahead to development could face constrained running hours from day one amid strong competition from lower cost renewables.

The Russian invasion of Ukraine has destroyed the notion gas is a reliable transition ‘bridge’ fuel. Since the war began, we have seen global energy markets disrupted, record price volatility, with growing concerns of a deep energy supply crisis with calls for energy demand curbs not witnessed since the 1970s.

Fuel costs are inevitably the largest single cost item for gas-fired power stations. Gas prices are subject to international commodity market movements, which can result in significant variations in cost from year to year. Such price moves can be the difference between gas-fired power generation capacity being competitive to operate or not.

Volatile fuel prices, which ultimately lead to high consumer electricity prices, should make the continued investment case for such assets even less attractive when compared with renewables which require near-zero marginal costs for operation. 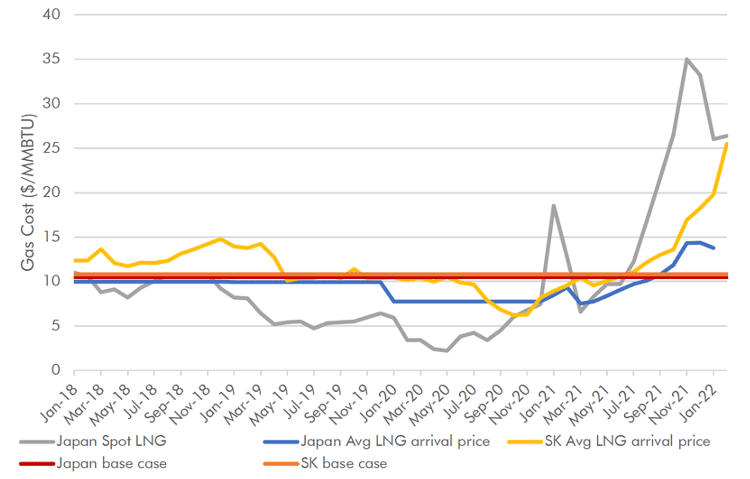 Increased exposure to the global LNG market would be unwise. Aside from the environmental concerns over increased investment in gas infrastructure, the political sensitivities surrounding this market produce wild swings in supply and demand. Now is not the time for nations to be increasing their dependence on gas. Actual market values have spiked to levels more than 300% above our base case within recent months. 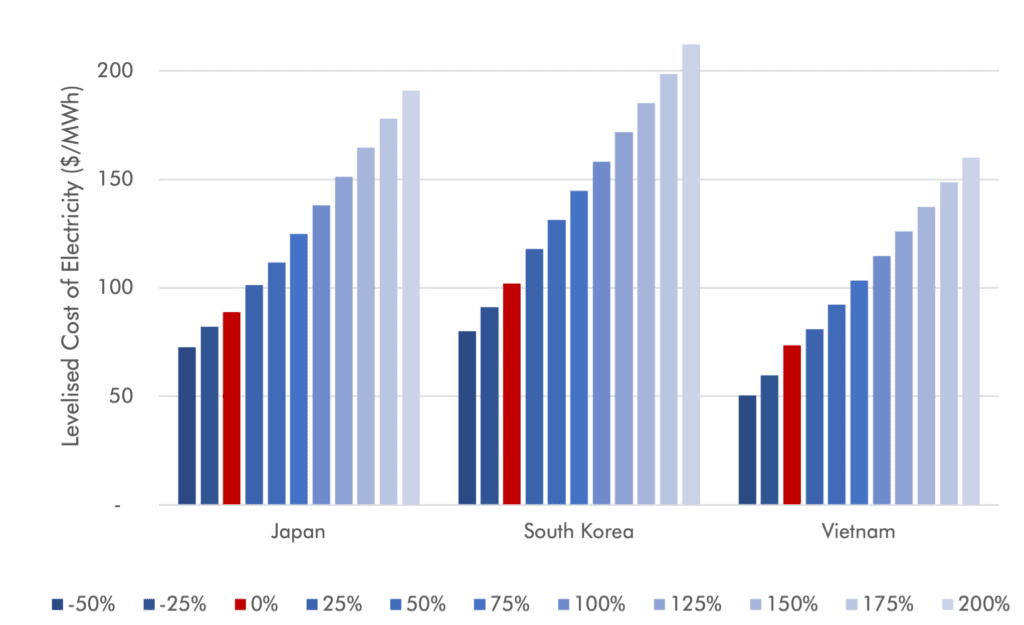 The high level of risk that the LNG market poses to gas plant economics in Asia compared with lower cost and lower risk renewables should discourage nations from increasing dependency on gas, even before considering how misaligned any investment in new gas infrastructure is with net zero emissions by 2050 pathways.

Even new solar units with battery storage capacity will become cost competitive with existing gas plant capacity in Japan and South Korea during the early 2030s. This means that these nations will have a low carbon energy source able to provide comparable flexibility services to a gas unit available at lower cost to the system within a decade, allowing policymakers to plan a phase-out of power sector gas use in line with net zero emissions by 2050 targets. This inflection point could come even earlier in the event of upward swings in LNG prices.

By 2025, new onshore wind farm costs will also have fallen below the LRMC of new gas units in Japan, while with Japan having one of the largest sea territories in the world, the country has also been flagged as having huge potential for offshore wind sector development.

Despite South Korea’s much lower level of renewables deployment, more favourable geographical conditions for installation are expected to mean that project build costs for Korea turn out comparatively lower than in Japan. Costs for new renewables build in South Korea also compete very favourably with gas in the country.

Our models project that by just 2025, a new onshore wind farm in South Korea will become a cheaper overall investment than a new gas-fired power station when comparing the LCOEs of both. This inflection point could be reached earlier, however, with new onshore wind beating new gas projects from as early as 2023 under our low-range scenario estimates.

Once the embargo lifts report can be downloaded here: https://carbontracker.org/reports/stop-fuelling-uncertainty/ ‎

About Carbon Tracker
The Carbon Tracker Initiative is a not-for-profit financial think tank that seeks to promote a climate-secure global energy market by aligning capital markets with climate reality. Our research to date on the carbon bubble, unburnable carbon and stranded assets has begun a new debate on how to align the financial system with the energy transition to a low carbon future. http://www.carbontracker.org

This Press Release is from IIGCC and CA100+ While 69% of focus companies have set...