COP26: A chance to reset and eliminate obstacles – coal in sights

2021 is a year of opportunity; one of resetting, reshaping and a chance to remove distortions that hinder an orderly energy transition. The energy transition is well underway and has reached a stage where free markets are supporting its course. COP26 must regain new momentum and should address remaining obstacles to transition with a focus on coal. While great strides have been made in a transition away from coal, a sustainable outcome is far from reached.

In most countries of the world, at least a share of current operating coal capacity is uneconomic. Carbon Tracker analysis shows that in 2019, more than 41% of global coal capacity in operation was cash flow negative and we estimate this to be the case for 46% in 2020 despite suppressed coal prices. The share of cash flow negative capacity in operation will rise further, to 53% by 2030, including 75% of Chinese capacity. 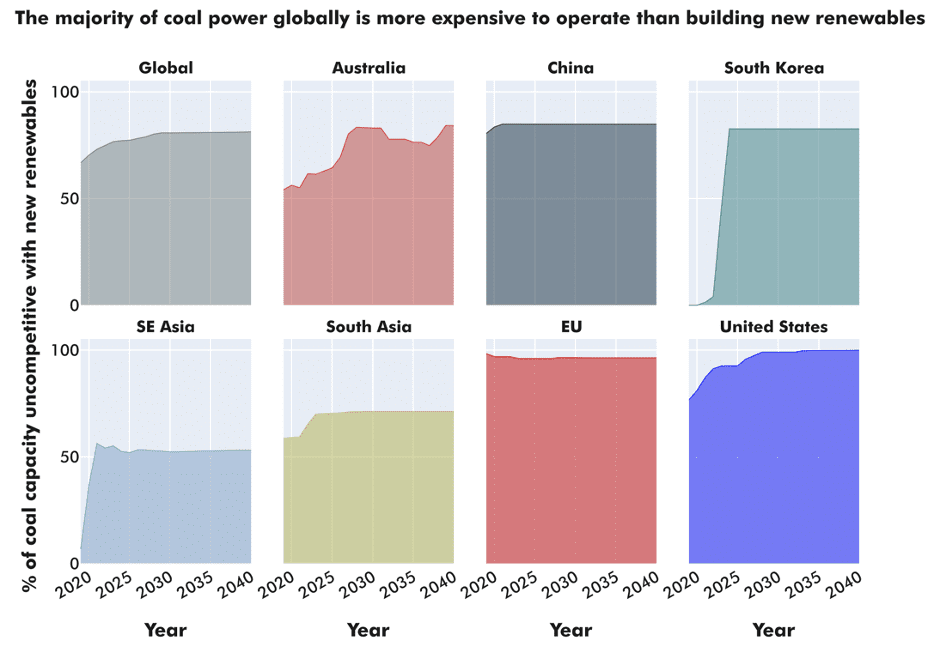 In many countries, the market has delivered the correct result through price discovery and shoved coal off the system. Capacity closures have accelerated. Regions with advanced climate change policy and mature market-based mechanisms are likely to see loss of financial viability of coal assets accelerate. In the EU 62% of coal capacity was already unviable in cash flow terms in 2019. The drivers of this process will continue to push economics: The EU ETS price is up 45% y/y.. Falling capital and financing costs and resulting renewables build will reduce coal capacity utilisation and therefore lead to operating costs getting spread over less hours. Load factors in a great number of markets are very significantly below technical specifications for coal plant, for a great number of units 50% of potential or less. The result is increasing costs for coal and loss of profitability in a self-perpetuating process entailing falling power prices, the latter by itself another contributor to the demise of coal-fired power generation.

Economics are now such that there is also clear long term economic benefit for investors and consumers from switching to renewables. Renewables have come a long way in terms of being financially sustainable as a result of rapidly declining capital costs and the mature technologies are now competitive compared to coal. Globally, some 39% of coal capacity is uncompetitive with wind and solar as of now in terms of levelised cost of energy (LCOE). This share increases very quickly, to 73% in 2025. In the EU, we expect that the entire coal fleet will be uncompetitive as early as 2025, in the US it will 74% of the coal park by that time. Storage is a killer application in this context. Rapidly declining cost will further the process alongside supporting inevitable structural change to our energy systems beyond pure intermittency issues.

Regions with ongoing coal build out represent great risk: Nearly 30% of new coal of a 499GW announced new build pipeline globally would enter the market cash flow negative from the outset. If the global pipeline of new coal was to go ahead, governments and investors might find themselves with $630bn of stranded assets, according to our calculation. China alone accounts for over 60% of cash flow negative capacity planned and under construction. Even in the EU, one of the more advanced markets in terms of transition away from coal, there is an 8GW pipeline planned and under construction, 50% of which is bound to be cash burning from day one. By and large all of this relates to CEE countries, notably Poland and the Czech Republic.

Governments play a crucial role in the future of coal. Ninety per-cent of existing and planned capacity is situated in markets where revenues and profits are partly or wholly determined by policy, regulation and government influence. Dynamics in regulated markets lead to distortion with regards to outcomes that markets in a supportive policy context would otherwise deliver. Cost pass throughs, capacity mechanisms, government backed PPAs and others hinder price discovery, i.e., the rational process whereby investors efficiently allocate capital. In countries where it is not left up to a liberalised market to deliver an undisturbed signal for optimal investment decisions to project developers, coal is provided with an artificial and unsustainable competitive advantage.

Policy makers and investors must ask themselves if and why they should support and finance assets that are fundamentally unviable, inconsistent with international agreements, i.e., Paris and likely to be stranded. Instead, governments should consider removing distortions that cloud investment signals. They would be better served by a supportive market-aligned policy framework for a sustainable energy transition. For example, in Poland where we expect that both gas and coal will be much more expensive to operate than building new renewables from today onwards, the capacity market must be reformed to limit the country’s exposure to stranded asset risk from coal and gas power, and to incentivise clean energy storage instead. We also highlight the urgent need for policymakers to plan for the retirement of coal assets over the coming decade in order to minimise the financial risk of a disorderly energy transition.

A switch to gas would be a misguided approach. Gas is also rapidly becoming uneconomical when compared with renewables. The EU and the US being examples of regions where entire or close to 100% of the respective gas fleets are uncompetitive with gas in 2026 If governments and investors are to benefit from the rapidly falling costs of new renewables as well as avoid further risk of asset stranding, a coal to clean transition looks more far-sighted.

COP26 offers the opportunity to consolidate an orderly transition away from coal. Our data shows the pace of erosion to its economic footing is accelerating across the globe. The pendulum has swung to a point where savings from phasing out coal exceed the cost of switching to new energy. Savings from a replacing uncompetitive coal capacity with renewables around the world could exceed $141bn in 2025.  COP26 should encourage laggards to follow economics and phase outs that have been successfully brought about by leaders. Laying the framework for removing distortions and creating supportive policy is this year’s opportunity for COP26. Refinancing and freeing up of capital locked into long term regulatory structures, transition financing and innovative new energy financing are further opportunities under the climate finance umbrella.

Investment decisions will benefit hugely from transparent disclosures on plant accounting assumptions, decommissioning and environmental remedy liabilities alongside asset retirement schedules in function of underlying Paris alignment scenarios. Given the likely stranding of a great number of coal plants, impairment risk is imminent, and waves of impairment have already come through the system. Financing models are to be put into question, notably types of financing backing assets, the true financial profile of which is radically different from thus far habitual assumptions. That in turn should lead to changing financing flows towards sustainable energy sources and model and enable one of the major COP26 climate finance ambitions.