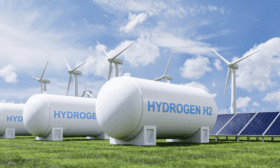 25 nations commit to invest in clean hydrogen; Europe, Asia most exposed to stranding of fossil hydrogen.

LONDON/NEW YORK, 20 October – War in Ukraine has spurred over $70 billion of fresh investment in green hydrogen in just a few months as costs drop and has made fossil fuel-produced Hydrogen uneconomic as gas prices soar. As a result of higher gas-feed prices, $100 billion of ‘dirty’ hydrogen assets may become stranded by 2030, a report published by Carbon Tracker on Thursday found.

Since the start of the conflict natural gas prices, a major feedstock for producing fossil fuel-produced hydrogen (blue and grey), has soared by more than 70% on international markets triggering an energy crisis and pushing lawmakers worldwide to urgently source alternative sources of fuel.

According to the IEA green hydrogen is forecast to grow by three times its 2022 levels, while in response to the conflict-induced structural changes, the report finds 25 countries, mostly drawn from the Global North, have in just a few months committed $73 [1]billion of public and private funds to the manufacture of the cleaner fuel. Germany, Morocco and the United States have pledged most, the report finds. Production, on the other hand, will be dominated by the Global South, responsible for 50% of total world production by 2050, with South Africa, Morocco and Chile controlling most (68 million tonnes).

Conversely more than $100 billion of fossil-based hydrogen assets, particularly those tied to gas, could become stranded before 2030 due to high gas prices, supply insecurities and commitments to reduce natural gas usage in line with net-zero targets. The report says Europe and Asia will be most exposed to stranding as new fossil-hydrogen assets (8 million tonnes) come on stream from this year.

“Though green hydrogen is not the silver bullet to the climate crisis, it offers part of the solution if used in a targeted way for specific industries and offers an attractive solution to bridging the thorny issue of energy intermittency anxiety in the power sector, alongside advanced battery technology and the use of smart grids.”

Despite the obvious benefits of utilising green hydrogen in helping to achieve net zero and as costs undercut those of fossil-based hydrogen, the report finds that environmental factors, like excessive fresh-water consumption and technological and energy inefficiencies in its manufacture, will stymie growth in the short to medium term.

“Green hydrogen will play a crucial role in the energy transition but applications will need to focus on the agricultural sector (fertilizers) & heavy industry (steel, heavy transport, shipping, mining) until tech innovation for electrolysers improves and fresh water usage is cut. Clean hydrogen could effectively be used to plug energy intermittency issues for solar and wind power as supply of those renewables grows exponentially,” Mbuk said.

Reliance on massive quantities of freshwater – to split hydrogen from water — and energy inefficiencies could seriously impede the growth of green hydrogen. A third of energy needed is wasted in production, up to a further 25% is lost when liquefying or converting to other carriers such as ammonia, while another 10% of hydrogen’s own energy is consumed to transport the product.

Using the IEA’s growth projection targets for the fuel the report estimates that by 2050 the total volume of freshwater needed will surpass a quarter of the world’s current freshwater consumption with countries in the MENA region most vulnerable.

The report estimates that building out a green hydrogen economy will require $3 trillion of investment by 2050 under Net-Zero targets. This is exclusive of building critical assets like import/export facilities, transportation (tankers), storage, pipelines and desalination plants. To that end governments have a major role in facilitating growth by creating the right regulatory environment including:

Once embargo lifts the report can be downloaded here: https://carbontracker.org/reports/clean-hydrogens-place-in-the-energy-transition

African petrostates risk financial instability if they bet on gas