There is a paradox at the heart of expertise: those who have accumulated the most authority in an industry are often those least able to foresee its disruption.[1] As you bask in the glory of a sunset, so you miss the sunrise; and, by extension, so do all those that trust in your analysis.

In recent years, the International Energy Agency has been an example of this paradox. As the most authoritative and widely cited source of energy analysis, it has failed to anticipate and forecast the speed and scale of disruption. However, the latest indication is that the IEA has escaped this paradox in its recent World Energy Outlook (WEO). Given that the IEA is such a trusted source for so many, and it is legacy thinking that helps preserve the legacy fossil fuel system, this is a highly consequential event.

The key message of this year’s WEO is that an unstoppable energy transition is underway and the 2020s will be a decade of profound change, powered by a virtuous cycle of policy action and technology innovation. But the report notes that policy remains too slow and too wedded to the old system: stated policies are behind announced pledges (the ‘implementation gap’) and even further behind a net zero by 2050 scenario (the ‘ambition gap’).

Policy support for the legacy fossil fuel system is now the key impediment to change. It is time for policy makers to close both these gaps and reap the vast social and economic gains a rapid energy transition presents – a point the report makes well. The new energy economy will be better in every respect: cheaper, cleaner and fairer, laying the ground for far greater prosperity.  According to the report, more jobs are created under the energy transition than business as usual – with between 13 and 24 million net jobs created and 75% of them occurring locally. Moreover, the net zero scenario would save 2.2 million deaths per year in 2030 from reduced air pollution and would bring far more energy security to the 80% of the world that import fossil fuels, as well as lower household energy bills. The IEA quantifies the massive growth opportunity for new energy technologies, stating a 10-fold increase in demand to $1.2tn pa. Or, in other words, the IEA’s framing of the energy transition has moved from pain to gain.

The report further points out that fossil fuel demand has peaked in almost all their scenarios. Only in one of the three main scenarios (STEPS) does fossil fuel demand rise above 2019 levels; and even in that case coal demand has peaked and oil demand is close. Furthermore, the past has shown that reality changes faster than stated policies. Investors and companies wanting to profit from the new world are better placed to anchor their expectations on the APS (announced policy) or NZE (net zero) scenarios. 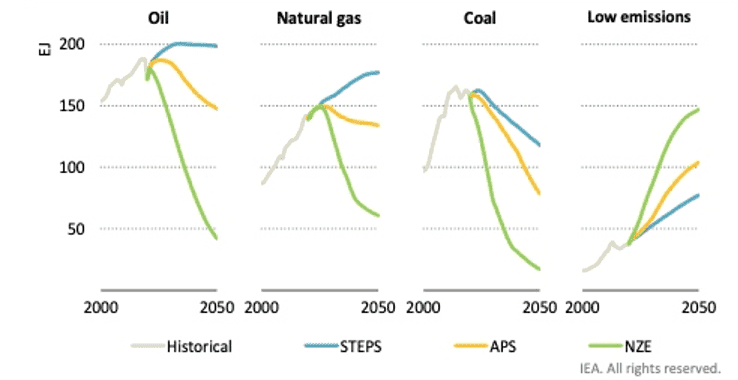 It is worth noting some of the old fossil fuel arguments that the IEA has just rebutted.  We highlight ten: 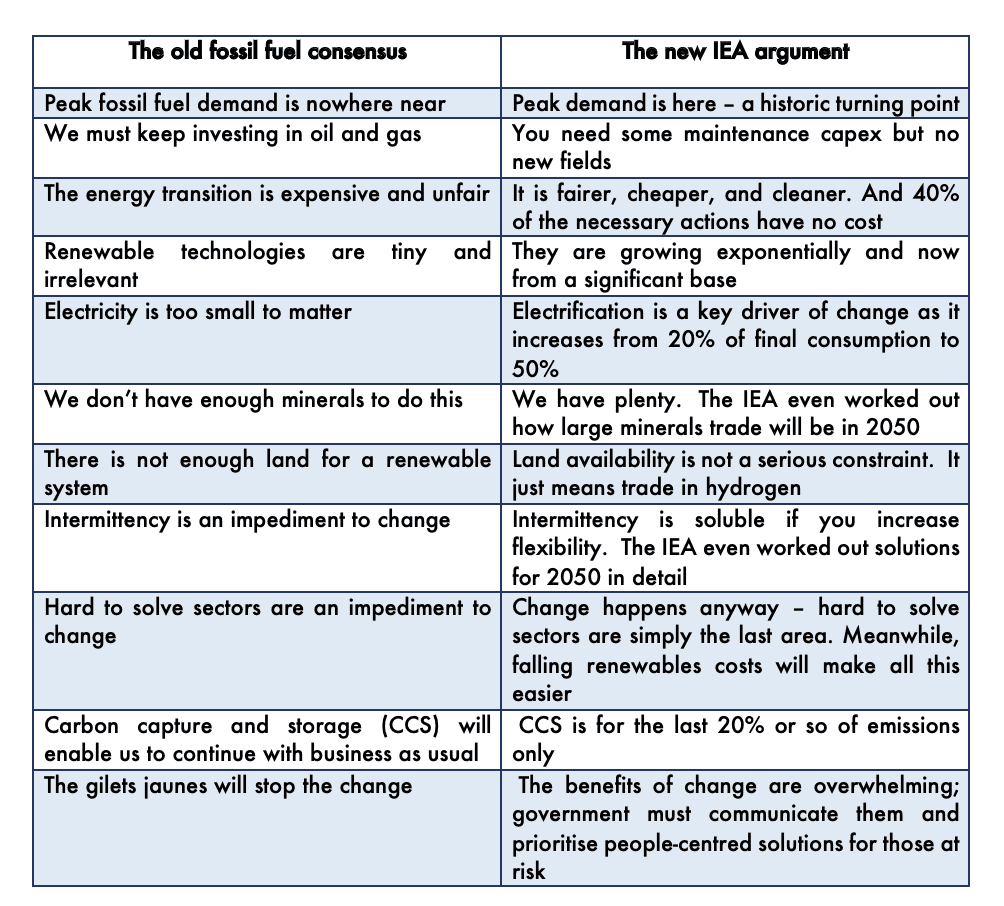 The report has weaknesses, but then it would be unrealistic to expect the IEA to break free from all their legacy thinking in one clean sweep. To name a few, the IEA underplays the role of learning curves and thus understates renewable cost declines and overstates the cost of change.[2] Growth rates for renewable technologies remain conservative, even in their most ambitious scenarios.[3] The IEA underplays the attractiveness and significance of an emerging market leapfrog. And it underplays the societal cost of the fossil fuel system, which has an externality of over $3,600bn pa.[4]

Yet, this doesn’t subtract from the bigger picture: one of the leading authorities of the fossil fuel era has effectively declared it over. Expectations matter, and the IEA has a key role in shaping them. If the real end to fossil fuels is not when they have no future but when enough people think that they have no future, then that end of an era is upon us.

[3] For example, after 2030, the annual growth rate in all scenarios drops for solar to just 5-6%. Given solar is growing at 20-25% pa, this is simply inconsistent with the history of “S-curve” shaped technology transitions.

[4] 36 GT of CO2 times $100 per ton. This is quite conservative given it does not include air pollution, nor all GHG emissions.

Why Jordan Peterson Should Think Again on the Energy Transition

On a recent episode of Joe Rogan’s controversial and highly influential podcast,...

ExxonMobil is planning on climate failure despite ‘Advancing Climate Solutions’