Tackling the Methane problem: why investors should drive change at investee companies

To keep 1.5°C alive, immediate action on methane emissions is required from the oil and gas industry, with significant impact for investors

Carbon dioxide or CO2 has rightly attracted most attention in the fight against climate change, yet there is another greenhouse gas released by the oil, gas and coal industries which significantly contributes to global warming: methane.  The IPCC estimates that methane, the atmospheric levels of which have nearly tripled since 1750, is responsible for around a third of warming (0.3°C) since pre-industrial times.[i] Recent international agreements at COP26 and draft EU legislation signal increased risk for investors in these industries. 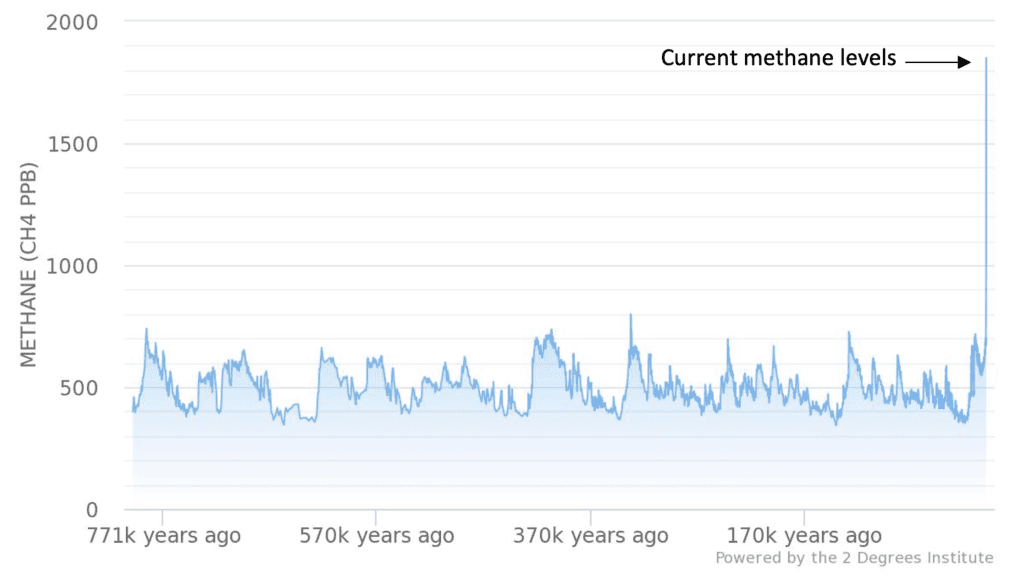 Methane (CH4) is a potent greenhouse gas with a warming potential 85 times that of CO2 on a 20-year timeframe[ii]. Accordingly, action on methane presents society with an opportunity to limit short-term temperature rise and reduce overshoot  on the pathway to stabilised global temperatures. 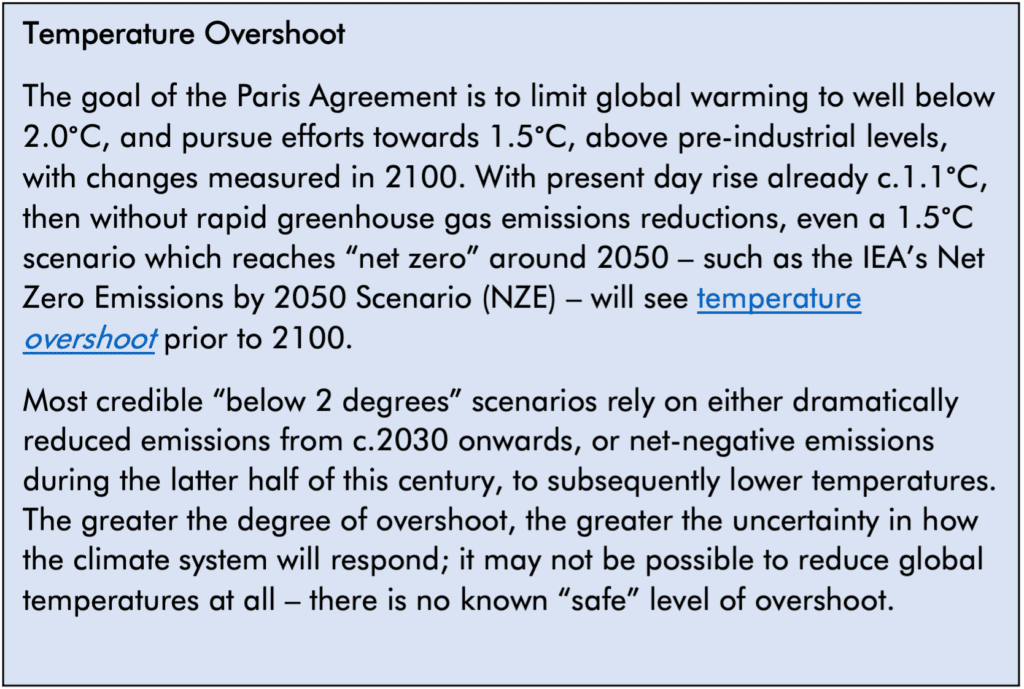 The Global Methane Pledge launched by the USA and the EU at COP26 commits national signatories to a collective goal of reducing global methane emissions from 2020 levels by at least 30% by 2030.

The two largest sources of methane (see chart) are set to increase; emissions from natural wetlands are likely to increase with climate change and urbanisation, and agricultural emissions set to rise as a growing global middle-class shifts to a more meat-based diet[iii]. The energy sector, therefore, will have to carry a greater share of the burden if global targets are to be met. 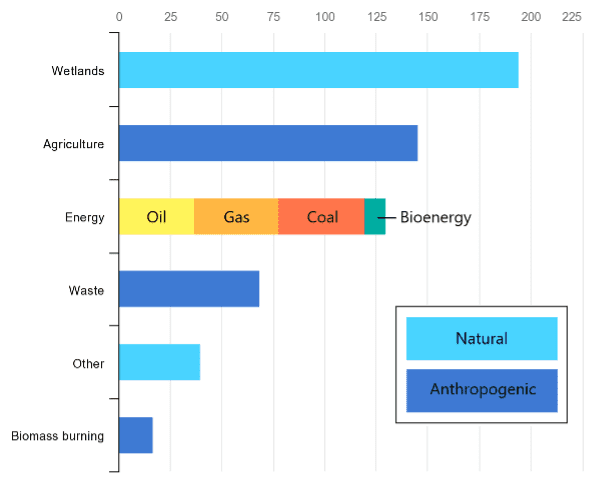 Under the NZE (1.5°C) scenario, methane emissions from the energy sector will need to fall by 75% by 2030, reductions well beyond those of the Global Methane Pledge. Compared to the relatively complex challenge of reducing methane emissions from coal mines, emissions from oil and gas can be abated with readily available technologies, potentially even paying for themselves given that methane is the principal component of natural gas. As a result, methane abatement over the next decade from oil and gas has increasingly become a focus for national governments.

For example, in December the EU Commission published new legislative proposals as a follow up to its Methane Strategy and international commitments under the Global Methane Pledge. The proposals are subject to approval by the EU Council and European Parliament, but if passed will introduce strict rules on methane emissions from oil, gas and coal within Europe, targeting an 80% reduction by 2030. This legislation would, crucially, also aim to trigger action outside the EU.

…and investors are increasingly exposed to regulatory risk, as emitters become easier to identify

The significance for investors is twofold. First, investors looking to be Paris, 1.5°C or “net zero” aligned must devise a strategy to engage investee companies to act on methane.

Second, even those not seeking portfolio alignment should recognise that inaction by companies exposes them to ever-growing regulatory risk as policymakers move to tackle the climatic impact of methane, particularly on short-term warming. There is potential for financial penalties either in the form of future border tariffs, or from missed premiums as demand shifts to fossil fuels with certifiable emissions footprints.

The Global Methane Pledge and the EU’s Methane Strategy both signal a move to quantify emissions rather than relying on estimates, with satellites now able to pinpoint specific methane sources. These observations can play a crucial role in providing independent verification of ground up measurements, alongside the identification of super emitters. With more data comes more scrutiny, and an increasing risk of financial penalty, particularly for the worst performers.

Venting from upstream operations is the largest oil and gas source

According to the IEA’s Methane Tracker Database, over 75% of the oil and gas industry’s methane emissions result from upstream operations, with downstream gas (processing and transportation) the other major source.  Emissions are typically categorised as ‘vented’ for those intentionally released, ‘fugitive’ for unintentional leaks, or as ‘incomplete-flaring’.

Figure 3. Breakdown of methane emissions from oil and gas 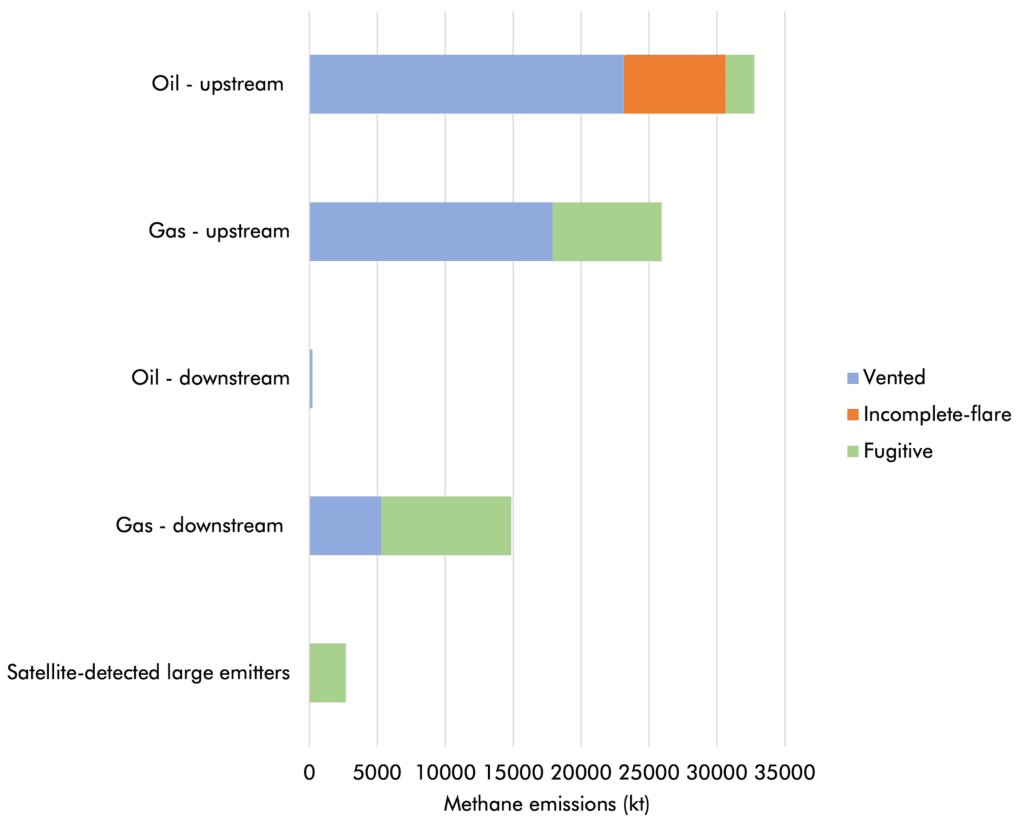 Intentional venting directly to the atmosphere is the main industry source, particularly in upstream oil operations where associated gas is often an unwanted by-product. To reduce this, unwanted gas is sometimes flared, in principle combusting CH4 to ‘less potent’ CO2 but combustion is often incomplete. The IEA estimate a global average for flare combustion rates as 92%, however the warming potential of this 8% ‘methane slip’ in CO2-equivalent terms (240MtCO2-eq in 2020) nearly matches that of the 92% combusted (265MtCO2). Some companies are much worse, with slips of as much as c.50%.

While flaring needs to be reduced in the mid-term, reducing venting and flare slips is a priority.

The description of petroleum gas as ‘natural’ originates from a 1930’s marketing slogan (some EU officials now refer to ‘fossil gas’). More recently gas has been pushed as a transition fuel, but this is being increasingly questioned as the true climatic impact of gas production may be as bad as, or worse than coal in the short term. Recent plans to classify gas as a sustainable investment under the EU’s new taxonomy has faced a rebuttal from the Institutional Investors Group on Climate Change.

The gas value chain accounts for more methane emissions than oil production, with venting a significant issue. This might be for safety or operational requirements such as venting pipelines for maintenance, or as a result of equipment design. To reduce emissions, the way the industry operates its infrastructure must change.  For example, pneumatic controllers are used extensively, utilising the high pressure of extracted gas (primarily methane) to open and close control values. Once used in the valve, the gas is then vented to the atmosphere. The solution is to use low-bleed equipment, or better still substitute for compressed air systems.

Fugitive emissions are, in some ways, an even bigger challenge for the industry, as they can often be more distributed in source, ranging from many small leaks across a pipeline network to individual wells (orphaned wells in the USA is a particular issue).

In response, companies are starting to set methane targets

Many large oil and gas companies have signed up to the World Bank’s ‘Zero Routine Flaring by 2030’ initiative but this is voluntary and not all signatories comply with reporting requirements. The more progressive companies have committed to faster action, e.g. Shell has a 2025 target to end the routine flaring of gas, yet flaring is just a small part of the methane problem.

Some companies are also now starting to set broader emissions reduction targets, including the overall methane intensity of gas production, but these are often on a restricted basis – i.e., for upstream assets or only those they operate themselves.

What should investors do?

Without mandated requirements for reporting standards, how companies both disclose emissions and set targets resembles the Wild West. Momentum however is building behind the Oil & Gas Methane Partnership 2.0 framework – led by the UN Environment Programme – which sets members tight deadlines to achieve best practice in measurement and reporting, and commits them to independent verification.

Some common threads emerge that investors should pursue when engaging investee companies:

[iii] Demand for animal-based foods is projected to grow by 70 percent by 2050. Source: How to Sustainably Feed 10 Billion People by 2050, in 21 Charts | World Resources Institute (wri.org)