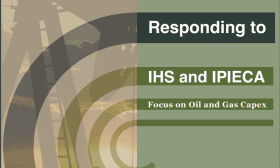 Responding to IHS and IPIECA Summary 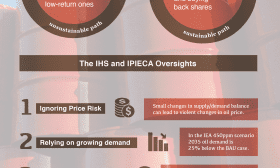 Climate Risk and the Fossil Fuel Myopia Responding to IHS/IPIECA: Focus on Oil and Gas Capex

During 2014, following in the footsteps of Shell and ExxonMobil, oil and gas industry association IPIECA published a “fact sheet” called “Exploring the concept of ‘unburnable carbon” in June and energy consultancy IHS Herold released a special report in July (dated September) titled “Deflating the ‘Carbon Bubble:’ Reality of oil and gas company valuation”.

We believe that these reports are complacent about the future for oil and gas, and understate the risks to industry business models.

IHS and IPIECA reports conclude that action on carbon emissions, although necessary, is unlikely to lead to much change in demand over the next 10-15 years. They assume that proven reserves are at little risk from policy changes. But the greatest threat to the industry comes from oil price changes impacting the cash flows coming from proven reserves. As we have seen in late 2014 (and 1986 and 2008), even small shifts in the supply/demand balance can cause large and quick moves in oil prices, moves that oil majors have no hope of reacting to given their current business models.

The industry’s proven reserve base might appear low risk – as the reports argue. But every dollar released from proven reserves that is reinvested into new resources merely shifts value forward, often by 10-20 years, transferring it to future projects which are at greater risk from market, policy and technology changes.

IHS and IPIECA argue that decline rates mean the world will continue to need new oil and gas projects. True, but if meaningful climate action is taken, it will need far less. The IEA 450ppm scenario sees 2035 oil demand 25% below the business as usual case. This means fewer new projects – and hence less capital investment.

Oil is the largest source of primary energy. Carbon Tracker agree that action is needed on coal but believe oil is an easier target for efficiency. Personal transport is inherently inefficient; just because action on coal is crucial does not mean that oil gets a free pass.

Further, even using the IHS approach of no reinvestment and looking at current proven reserves only, deterioration in the oil price driven by expectations of future demand weakness could cause cash flows to weaken and valuations to fall.