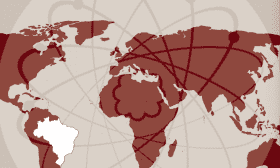 Brazil at an energy cross-roads New study shows potential competitive advantage of diverse energy base, and...

The fourth in the series of Carbon Tracker’s Unburnable Carbon reports, focuses on Brazil – a country with the fascinating combination of a large, emerging economy, a strong renewable energy sector but also significant potential fossil fuels in the pipeline in which the state has a sizeable stake. This report has also been produced in Portuguese – for this version of the report, click here.

Written alongside SITAWI – Finance for Good to provide the local context, our report reveals that Brazil’s energy supply is at a major crossroads. If the Brazilian government carefully manages the growth of its energy supply from its competitively advantageous pre-salt oil reserves and renewable energy, it has significant sustainable investment potential. Alternatively, if they create an oil-rush around its pre-salt, it could cause price rises that render it ‘unburnable’ in global carbon budgets and expose itself to the global carbon bubble.

‘Investing in a 2°C world will have winners and losers – Brazil may be well placed to come out ahead’, said Luke Sussams, Senior Researcher at Carbon Tracker.

Brazil currently sources over 40% of its energy from renewable energy. Currently producing the second most biofuel globally, Brazil also has an established hydropower sector. Bloomberg New Energy Finance research estimates that these two sectors alone have the ‘reserves’ equivalent to two fifths of Brazil’s oil and gas reserves. Wind energy is also predicted to increase rapidly in the country.

Low levels of oil and gas reserves and potential reserves

Brazil’s oil and gas sectors are dominated by the state-owned company, Petrobras. Brazil’s listed oil and gas reserves, however, are small in the global perspective. For example, BP found that global oil reserves total 1,650bn barrels of oil equivalent (boe). Even Brazil’s potential reserves (those more speculative assets that have at least a 50% chance of being proven) are quite small against this backdrop. 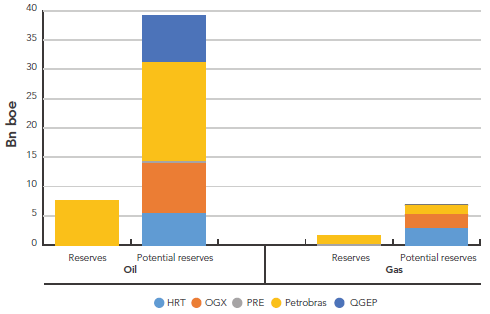 Brazil’s offshore pre-salt oil reserves are estimated to hold 70 – 100 billion boe of oil and gas. This is 7 – 10 times the size of Brazil’s current proven oil and has reserves and equivalent to 4-6% of total proven oil reserves globally. Given the degree to which the world has been scoured for resources, a find of this scale is rare. Consequently, the world’s major oil and gas companies have flocked to grab a piece.

In the context of our Unburnable Carbon 2013 reports and carbon budgets, instinctively it may feel that oil and gas on this scale must remain in the ground. However, this analysis reveals that due to its low-cost, Brazil’s oil production is at a low risk of being stranded and in a strong position to gain some of the ‘burnable’ carbon budget. As the graph below from Citi illustrates, the forthcoming oil projects for Petrobras (who own over 90% of oil reserves listed in Brazil) are firmly in the first quartile on the cost-curve. 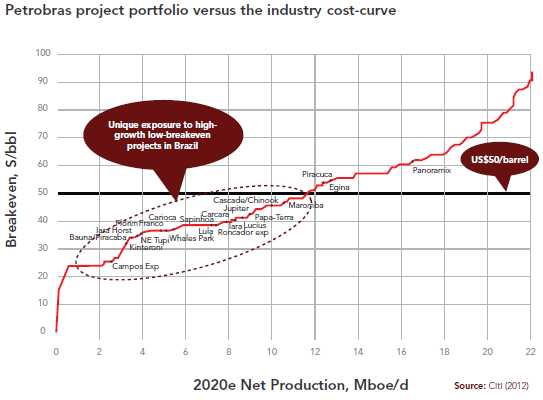 The US$50/barrel mark is highly significant as this is the breakeven level set by recent HSBC research looking at the effect on oil prices in a 2C scenario. Therefore, the majority of Petrobras’ projects remain cost-effective and ‘burnable’.

The state, who will have a large role in the decision-making involving the pre-salt given their stake in Petrobras, needs to avoid over-heating its economy by allowing too rapid an expansion of this sector, pushing up the costs of deepwater infrastructure and expertise, or local labour and materials.

Due to begin being auctioned off at the end of 2013, Petrobras has been preparing for years, initiating in 2010 the largest capital raising process in history, totaling US$69.9billion. Last year Brazilian listed oil and gas companies spent over US$23 billion purely on exploration and production of more oil and gas reserves (see below). Over the next five years Petrobras plan to spend US$237 billion to double their oil reserves, primarily from the pre-salt.

Given the scale of the pre-salt and its expected production, most needs to go to the export market to remain within domestic emissions reductions targets (PNMC) and the equivlant carbon budget.

While the PNMC carbon budget to 2020 targets a reduction of approximately 30% in emissions against as a business as usual scenario, it still represents an absolute increase of over 100% on 2005 levels, providing some scope for domestic pre-salt oil consumption. This increase is offset by deforestation and agricultural reductions.

Previous analysis by Carbon Tracker of the companies listed in South Africa and Australia has shown that these markets are dependent on the coal market – domestically in South Africa’s case, and the export market for Australia. The evidence in this report shows Brazil is in a strong position compared to these markets to compete for the capital of international investors. Brazil therefore has an opportunity to capitalise as carbon constraints come in.