Carbon Clampdown: Closing the Gap to a Paris-compliant EU-ETS 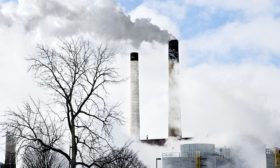 Potential future action to align EU emissions targets with Paris accord may render all coal and lignite...

Our Head of Research, Mark Lewis, was interviewed by Ian King on Sky News after the release of his report on... 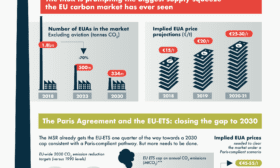 Carbon Clampdown: Closing the Gap to a Paris-compliant EU-ETS

The infographic on our report Carbon Clampdown: Closing the Gap to a Paris-compliant EU-ETS, explaining how...

Closing the Gap to a Paris-compliant EU-ETS

Carbon pricing, whether via cap-and-trade schemes or taxes, is not sufficient on its own to achieve the objective of the Paris Agreement. However, if the world is to stand a chance of restricting the increase in the average global temperature to “well below 2°C” versus pre-industrial levels, then many leading international agencies and institutions argue that a much more concerted and widespread global take-up of carbon pricing will be necessary.[1]

While acknowledging that carbon pricing needs to be complemented by a wide range of other approaches and solutions – policies, technologies, and investor action – we agree with this assessment. The space left in the atmosphere for storing greenhouse gases is the ultimate scarce resource, and it needs to be priced accordingly.

It is in this context that the recent reform of the European Emissions Trading scheme (EU-ETS) – and in particular the introduction of the new mechanism  for modulating supply, known as the Market Stability Reserve (MSR) – is so interesting: it has thrust the issue of carbon pricing back into the headlines, not least owing to the 200% increase in EU carbon prices since May last year.

Our modelling shows that although the Market Stability Reserve (MSR) will tighten the EU-ETS very materially – we estimate it will remove 3 Gigatonnes’ (Gt) worth of EUAs from the market over 2019-23 – it still only gets us one quarter of the way towards a Paris-compliant cap by 2030 compared with the current EU-ETS cap under the existing EU-wide target of -40% by 2030. Indeed, we estimate that the extra tightening of the EU-ETS cap required to align with a Paris-compliant EU-wide trajectory for 2030 and beyond would require incremental emissions reductions of 1.6Gt over 2021-30 versus our base-case scenario under the current cap.

Moreover, all of this 1.6Gt of extra abatement would have to come from lower coal-fired power generation. This explains the much higher carbon prices implied under our Paris-compliant scenario versus our base case: EUAs would likely need to rise to levels that would bring all fuel-switching options into play, thereby making even the most efficient coal and lignite power plants unprofitable by 2030. As such, our analysis in this report underlines the conclusion of our recent report on EU coal generation, Lignite of the Living Dead: the medium to long-term outlook for coal and lignite in the EU is very bleak.

The recently completed overhaul of the EU-ETS will see the MSR start up in January 2019, thereby prompting the biggest supply squeeze the EU carbon market has ever seen. As shown in Figure 2, our projections indicate that the MSR, operating at an initial injection rate of 24%, will slash the EU-ETS surplus for fixed installations – technically known as the Total Number of Allowances in Circulation (TNAC) – from 1,776m to 496m over 2019-23, a drop of 1,270m (70%) (Figure 2).

The EU-ETS has never before seen such large or sustained annual deficits against the backdrop of such a sharply declining surplus, and the upshot will likely be a need for large-scale fuel switching in the power sector from 2019 onwards to plug the supply gap.

2. Aviation and total system dynamics in the EU-ETS to 2030

The aviation sector’s structural and growing short position will exacerbate the supply shortfall in the EU-ETS over 2019-23, and bringing together our modelling of EU-ETS dynamics for both fixed installations and aviation we project the system-wide deficit over 2019-23 will average -287m per year, and over 2019-30 as a whole -160m per year (Figure 3).

And as shown in Figure 4, this means that the system-wide surplus falls more sharply than the surplus for fixed installations only, from 1,645m in 2018 to only 212m in 2023, a drop of 1,433m (~90%). Indeed, on a system-wide basis, our modelling shows that after taking into account the supply-demand dynamics of the aviation sector, the residual cumulative balance by 2030 for fixed installations – a surplus of 334m – becomes a cumulative deficit for the EU-ETS overall of -266m.

However, since it is physically impossible for the system to accumulate a deficit over a given trading period – EUAs may be banked from one period into another but may not be borrowed from a future trading period into an earlier one – we think the supply gap our model is projecting in the EU-ETS over 2019-30 in general, and over 2019-23 in particular, will have to be plugged by physical emissions reductions.

In our view, that means large-scale fuel-switching in the power sector from coal to gas.

Based on the current forward curves for coal and gas, the fixed mining costs for lignite, and the level of fuel switching likely required over 2019-23 as indicated by our modelling of the MSR’s impact, we think EUA prices could break €15/t over H2 2018 as both compliance entities and speculators continue to anticipate the coming supply squeeze. Thereafter, we think prices could break €20/t in 2019, and then reach €25-30/t over 2020-21 as the supply squeeze itself really starts to bite.

Of course, there are many dynamic variables in play when we consider how EUA prices might evolve over 2019-23, and we would therefore emphasize that our implied indicative pricing range for EUAs over 2018-21 comes with a number of caveats.

In particular, depending mainly on (i) exactly how much abatement might be required over 2019-23, (ii) the amount and availability of combined-cycle gas-turbine (CCGT) generation capacity with the required efficiency levels, and (iii) the evolution of commodity prices between now and 2021, the carbon price required to plug the supply gap could be lower or higher than the levels we have imputed from our modelling of the supply-demand dynamics in the EU-ETS over 2019-23, and the fuel-switching price levels implied by current forward curves.

Nonetheless, from today’s vantage point we think that with significant levels of fuel switching likely required to plug the supply gap created by the impact of the MSR from 2019 onwards, a range of €20-30/t seems a reasonable estimate of where EUA prices will have to go over 2019-21 to effect the abatement necessary to clear the EU carbon market over 2019-21. 4. Paris and the EU-ETS: Gauging the Post-MSR Gap

At its most recent meeting last month, the EU Council formally requested that the Commission draw up a plan for aligning the EU’s long-term emissions-reduction strategy with the Paris Agreement. This means the Commission now has 12 months to devise a strategy for aligning the EU’s emissions trajectory to 2050 with the Paris Agreement, and hence that the process has been set in train that could ultimately at some point in the next three to five years lead to an EU-ETS cap aligned with the objective of restricting the increase in the average global temperature to “well below 2°C”.

In order to estimate at what level the EU-ETS cap would have to be set over 2021-30 so as to align with a Paris-compliant trajectory, we adopt both a top-down and a bottom-up approach.

On a top-down basis, we take the study by the Netherlands Environment Assessment Agency published last October and already rreferenced above, which argues that an EU-wide emissions target of -55% versus 1990 levels would be consistent with the objective of the Paris Agreement. From this EU-wide target we derive an implied cap for the EU-ETS by 2030 of 943Mt.

On a bottom-up basis, we take the the International Energy Agency’s imlplied carbon budget for the EU power sector under its Sustainable Development Scenario (SDS), and find that its is consistent with the EU-ETS making the same relative contribution to a Paris-compliant 2030 EU-wide target relative to the non-ETS sector as it does under the current EU-wide 2030 target.

Based on our top-down and bottom-up approaches, we estimate that the tightening in the EU-ETS cap consistent with a Paris-compliant trajectory would require a reduction in the volume of EUAs available to the market over 2021-30 of 2,145Mt versus the current EU-ETS cap. However, and despite the massive supply reduction effected by the MSR already in our base case, we estimate that the impact of the MSR in reducing the current EUA cap over 2021-30 will be limited to 550Mt.

This means that under a Paris-compliant scenario, we estimate that the EU-ETS would need to see EUA volumes reduced by a further 1,595Mt over 2021-30 compared with our base-case modelling of EU-ETS supply-demand dynamics after already taking the impact of the MSR into account. Figure 7: LRF in EU-ETS under current legislation, together with CTI estimate of effective LRF on a post-MSR basis, and CTI estimate of a Paris-compliant pathway (2021-30) (Mt)

All of which means that on our numbers, the MSR gets us one quarter of the way to bridging the gap between the current EU-ETS cap mandated under the existing -40% EU-wide target for 2030, and the level at which it would need to be set for the EU-ETS to make its proportional contribution to a Paris-compliant EU-wide target of -55% by 2030.

So, what would a Paris-compliant EU-ETS cap mean for EUA prices?

Figure 8 shows our stylized merit order for German fossil-fuel (FF) plant over 2024-28, assuming a much higher increase in EUA prices than under our base case. This is because we estimate that under this scenario a 50%-efficient gas plant would most likely have to displace even the very limited number of 46%-highest-efficiency coal plants, and also the 43%-highest-efficiency lignite plants.

Figure 8: Stylized German merit order for fossil-fuel (FF) generators in a Paris-compliant scenario over 2024-28 with a range of CCGT efficiency rates, and with EUAs rising to €60/t by year-end 2028 In short, assuming that fuel switching between CCGT plants with efficiency rates of 50% or more and all coal and lignite plants – i.e. even the most efficient coal and lignite plants with efficiency rates of 46% and 43% respectively — would be needed, we derive an implied indicative pricing range for EUAs over Phase 4 of the EU-ETS under our Paris-compliant cap of €45-55/t.

In turn, this means that essentially all of the extra 1.6Gt of abatement required over Phase 4 of the EU-ETS under our Paris-compliant scenario would have to come from reduced coal-fired output.

[1] European carbon allowances are formally known as European Allowances, or EUAs. Each EUA gives the right to emit one metric tonne of CO2 in the EU-ETS.

The energy complex has EU coal generators in a chokehold. Are policymakers and investors...

In this report, we look at how a scenario for the EU28 that is compliant with limiting...

Uneconomic Coal Could Be Squeezed Out Of...