Beyond the Shale: Aboard the Price Rollercoaster 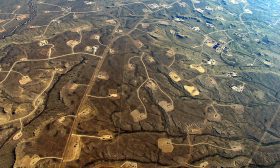 Carbon Tracker introduced the concept of stranded assets to get people thinking about the implications of not...

The flaws in the business models of some of the largest US shale producers are becoming clear. Growing levels of debt are unsustainable, and there is a risk that investors could face a bumpy ride as sector equity finance surges in 2016.

Plunging hedging revenues, coupled with high net debt and falling output, have punished struggling US shale oil and gas companies, with stragglers more likely to default on debt under a longer period of low oil prices.

Despite the recent oil price collapse, the analysis shows that equity investors appear to be throwing caution to the wind, piling back into the sector with some $8.9 billion of equity issued already in the first quarter of this year – a more than 10-fold increase on the final three months of 2015, and the highest quarterly level since 2011 at least.

Carbon Tracker has produced its Carbon Supply Cost Curves which identify the higher cost, higher carbon supply options which do not fit within a 2˚C scenario. Marginal production regions like Canadian oil sands and U.S. shale are firmly in the frame for cuts in capex if the industry misreads demand. As with any region, not all barrels are the same, hence we are conducting this more detailed analysis to understand the variation in exposure to oil price volatility. The highly leveraged business model of many of the smaller shale operators also means that the ability of these companies to sustain operations and service debt if oil prices do not recover is in question.

Debt burden too great for some

Shales are medium cost sources of production in the US which are marginal at recent oil and gas prices, even after significant cost-cutting. Survival is predicated on an effective hedging strategy and carrying lower debt levels. Creditors have growing influence at the companies most exposed, which are struggling to raise cash to meet debt payments. Many U.S. E&P companies are burdened with high levels of debt, having out-spent income even while times were good, and prices high, to build up acreage and increase production.

In this analysis, we consider leverage ratios as one indicator of company performance. We use a ratio of net debt to adjusted earnings (EBITDAX). EBITDAX is defined as earnings before interest expenses, income taxes, depreciation, amortisation and exploration expenses. Creditors often use such leverage ratios to define borrowing conditions, or covenants, under E&P debt facilities. We undertake a sensitivity analysis of the leverage ratios of five large pure-play U.S. E&P companies at a range of oil and gas prices: Chesapeake; Concho Resources; Continental Resources; Energen; and Whiting Petroleum. This study updates our previous report, “U.S. shale oil and gas: Going over the hedge”, which last May found risks for investors in E&P companies at oil and gas prices below $50 and $2.25 respectively. Those risks have been borne out, with significant losses in value for equity and bond investors.

Last year’s report found that Chesapeake and Whiting Petroleum had the highest leverage ratios, among these five companies. We note that these two companies have performed weakest by many benchmarks, since publication of that report. Whiting shares are down around 75% from their offer price in a $1.1 billion rights issue 12 months ago. And Chesapeake now has the lowest Standard & Poor’s credit rating among these five companies (CCC), followed by Whiting Petroleum (B+). Chesapeake and Whiting have both suspended the total leverage ratios in their financial covenants under their creditor agreements. This shows that the U.S. shale operators should not be treated as a homogenous group as there is significant variation in exposure.

Expect the Unexpected: The Disruptive Power of Low-carbon Technology

This report was produced in partnership between Carbon Tracker and the Grantham Institute...

Lost in Transition: How the energy sector is missing potential demand destruction

This report is designed to challenge the conventional thinking and linear models which...

In this report we analyse the EU’s largest 5 power generators: Électricité de France...

WEO 2016 also warns of disjointed scenario if energy transition is...