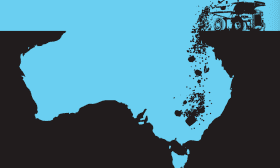 John Connor, CEO of The Climate Institute: "Australian and overseas investments in Australian coal rest on a speculative bubble of climate denial, indifference or dreaming. This report shows they do not [take climate change seriously] or are taking risky gambles."

Following on from Carbon Tracker’s Unburnable Carbon 2013 global analysis, we release this report in collaboration with The Climate Institute assessing the risks facing the Australian coal, oil and gas sectors.

This report finds that Australia contributes approximately 56GtCO2 of fossil fuel reserves. Australian fossil fuel production has a particularly high exposure to coal reserves, which make up 51GtCO2 of this total.

Our global analysis found that 60-80% of fossil fuel reserves are unburnable to have an 80% chance of limiting global warming to 2°C. To derive a global budget for just coal emissions, we applied coal’s proportion of fuel combustion (40%) to both the precautionary global fossil fuel budget (500GtCO2) to have an 80% of limiting global warming to 2°C, and the optimistic budget of 900GtCO2. The diagram below illustrates how this compares to Australian coal reserves and resources. 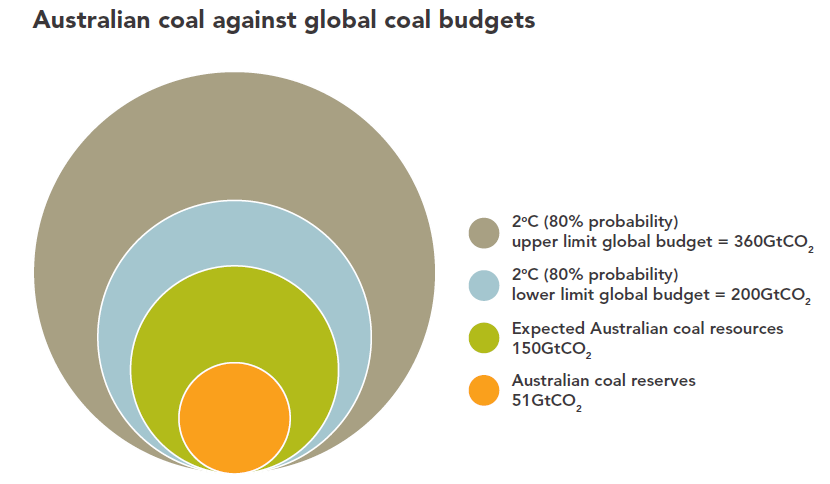 Coal resources are those coal stocks yet to be developed and have at least a 50% chance to be made economically viable. This, therefore, gives an indication of what companies are trying to bring online.

Australia’s total coal resources equals 300GtCO2, so applying a conservative estimate that only 50% will of this will be proven (150GtCO2) reveals total holdings that take up 75% of the precautionary, lower limit global budget for coal.

This is a staggeringly large proportion given Australia currently only produces 11% of total global coal.

Although the ASX200 (Australian Securities Exchange) has a disproportionately high exposure to Australian coal in a carbon constrained future, 61% of this coal is listed on international stock exchanges. This leaves Australian coal highly vulnerable to the behaviour and decisions in which they have no say at all. For example, the UK has as much Australian coal listed on it as the ASX and recently pressure has been rising on the Financial Policy Committee to mitigate the risk these ‘sub-prime’ fossil fuel assets pose to economic stability.

Similarly, Australia’s coal is exported for a total value of AU$48billion, but most of their key export markets are implementing significant climate regulations. See below. 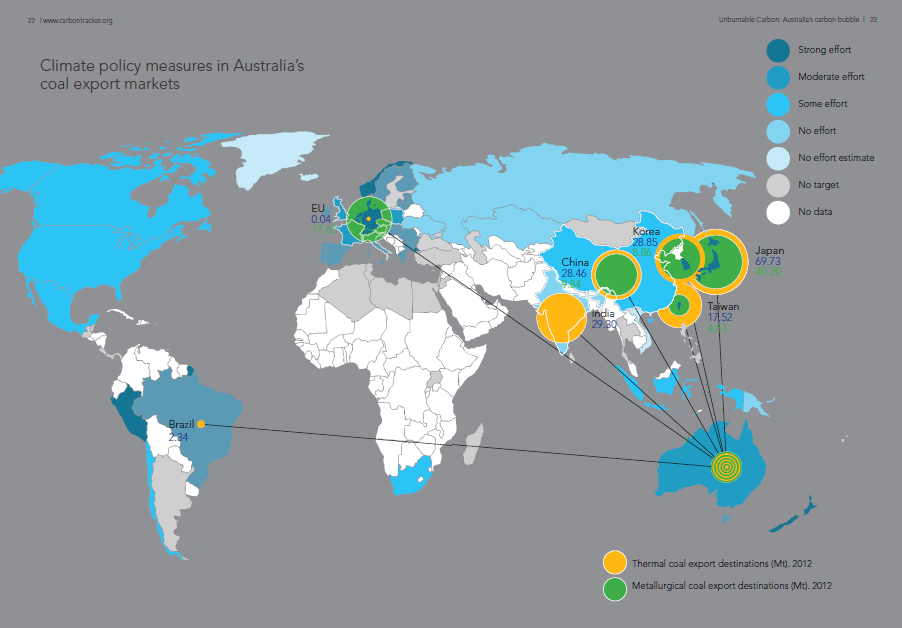 As the comparison to global coal budgets illustrate above, Australia will have a vast oversupply of coal assets in a carbon-constrained world, therefore running the risk of being left with significant stranded assets.

Be an active investor – investors such as superannuation and pension funds need to influence the way investee companies measure, monitor and manage carbon relates risks. They should call on the AU$20billion to be more prudently deployed to other sectors of the economy.

Regulators to improve disclosure of climate risk – The global financial crisis proved that the financial markets are not currently set up to manage systemic risks. Therefore, they should require additional disclosure on factors such as the carbon dioxide potential of fossil fuel reserves, to provide an indicator whether climate risk is increasing or decreasing.