2020 Vision: why you should see the fossil fuel peak coming 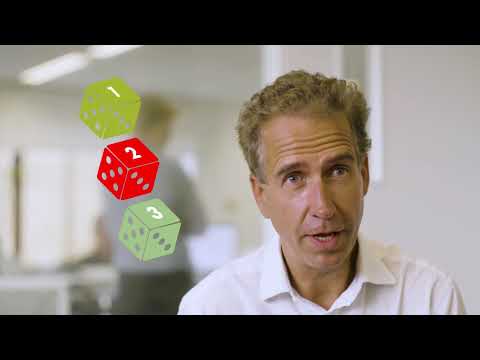 Video: 2020 Vision – Why you should see the fossil fuel peak coming

Kingsmill Bond explains the findings of his report 2020 Vision: Why you should see the fossil fuel peak... 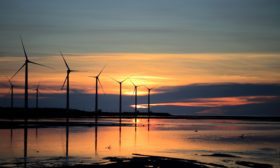 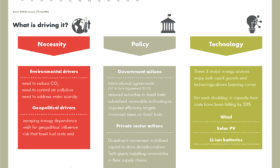 2020 Vision: why you should see the fossil fuel peak coming

These infographics visualise the findings and thinking behind our report "2020 Vision: why you should see... 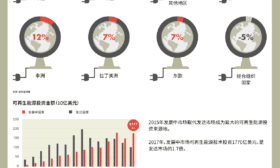 The peak in fossil fuel demand will have a dramatic impact on financial markets in the 2020s.

What is driving the energy transition?

The energy transition has a number of drivers, which can be described in terms of necessity, policy and technology. In turn these are driving an emerging market energy leapfrog and very rapid growth for new energy technologies.

Three major technologies of solar PV, wind and Lithium-ion (li-ion) batteries enjoy both rapid growth and technology-driven learning curves. For each doubling in capacity their costs have been falling at around 20%, a phenomenon that we expect to continue. In addition to this, digitisation has become a key enabler of the energy transition.

The spectacular fall in prices and the increase in flexibility provided by digitisation has driven very rapid growth (known as S curves) for the
key industries of solar PV, wind, batteries and Electric Vehicles (EVs). Investors are impacted at the peak

There are three main aspects of the energy transition: energy efficiency moderates demand growth; the decarbonisation of the electricity sector; and the electrification of energy end-use sectors.

The theory of the diffusion of innovation applies to the energy transition. As a successful new product conquers a market, it addresses new groups of people, from the innovators to the early adopters, early majority, late majority and laggards. In each country and each sector, renewables are moving along this type of trajectory.

The most important phase for financial markets is the peaking phase, the point at which demand for the old energy source peaks. Many standard concerns about the energy transition (such as aeroplanes, winter heat or heavy transport) are in fact phase four issues that will not hold back the transition itself.

We have seen a similar pattern in many energy transitions, from electricity, coal and cars in recent years to horses and gaslights in the past. Demand for incumbents peaks early, and investors in incumbents lose money early. Fossil fuel demand will peak in the 2020s

At the tipping point when total fossil fuel demand peaks in the 2020s, the challenging technologies of solar PV and wind will be around 6% of total energy supply and 14% of electricity supply.

Electricity is key to the transition. In 2017 energy to make electricity was 43% of total energy supply. Because other sectors have been electrifying, the share of electricity is growing at around 3.6 percentage points per decade. The net result of this is that energy required for electricity has made up 71% of global energy demand growth over the last 5 years.

It is key to understand the timing of the peak. The conventional bottom-up approach is less useful at times of systemic change because of modelling uncertainty, regulatory pressure and rising inter-fuel competition. The amounts at risk are colossal

Countries which are dependent on fossil fuel exports are vulnerable to the ending of the high rents of the sector. We identify 12 countries where fossil fuel rents are over 10% of GDP.

The sectors impacted by the energy transition are wide and not just limited to fossil fuel stocks. Outside the obvious areas of coal, oil and gas, they include capital goods (such as gas turbines), transport (such as coal ports) and automotive. Directly impacted sectors compose up to a quarter of equity indices. In debt markets, fossil fuel and related sectors make up nearly a quarter of the total corporate bonds followed by Fitch and a little more of the bonds covered by Bloomberg.