One of the world’s leading energy forecasters released a report this morning arguing that 2019 was the peak of the fossil fuel era.  This peak has dramatic consequences for financial markets and policymakers, and gives new hope we can achieve the goals of the Paris Agreement.

DNV GL is a huge Norwegian energy services company, employing over 14,000 people, and with operations all over the world.  Each year they publish the Energy Transition Outlook, with a view on energy supply and demand up to 2050.  Their perspective tends to offer a useful counterweight to the business as usual narrative put out by the incumbent oil sector, and in 2019 for example they argued that fossil fuel demand would peak in 2027.  The drivers of change are the growth in the new energy technologies of solar, wind and electric vehicles, on learning curves of rapidly falling prices.

In 2020, DNV GL have factored in the impact of COVID, and their conclusions are radically different.  They argue that COVID will have a permanent impact on demand for fossil fuels, and that it will bring forward expected demand peaks to 2019.  They note that 2019 was therefore peak demand for fossil fuels, peak demand for oil and peak emissions from the energy sector.  We should not be too surprised by this; as we noted in May of this year, cyclical shocks tend to bring forward structural change. 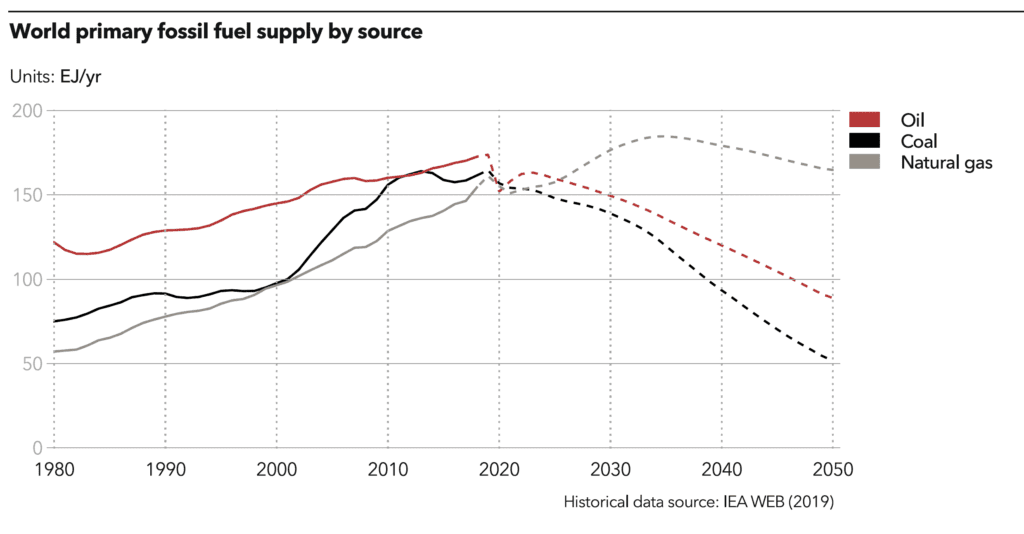 A focus of Carbon Tracker for many years has been the consequences of peaking demand on financial markets invested in an enormous fossil fuel system tooled up for decades of growth.  Peak demand means overcapacity and low prices, it means stranded assets and stranded companies, it means a restructuring of the old and a bright new world of opportunity for the new.  A glance at the underperformance of the energy sector over the last few years shows that investors are well aware of the rising risks.

The DNV forecast of peak fossil fuels gives hope to those who wish to achieve  the goals of the Paris Agreement to keep the global temperature rise this century to well below two degrees.  In their central forecasts, DNV GL note that the world is still on track for 2.3 degrees of warming by the end of the century.  But they also note that we now have the technology solutions to get to below two degrees.  What is needed now is more political will, to drive change faster and to make up for the failure of the market to price externalities.  As we start down the path to change, so political solutions are likely to prove easier to implement.

And where DNV GL leads, other forecasters are likely to follow as they incorporate the impact of COVID into their numbers, with markets responding as it becomes ever more clear that the future energy system will be based on new technology. Governments prioritising the economic, environmental and public health interests of their populations have only one option – to build back better by aligning stimulus spending with the goals of the Paris Agreement.