Shell and Eni’s recent strategy updates have highlighted a key emerging point in the debate on oil and gas companies’ emissions targets. In our blog on the new documents, we highlighted how both companies will rely heavily on carbon capture, utilisation and storage (CCUS) and nature-based carbon sinks to achieve their new, more ambitious emissions goals. Here, we want to expand on that topic a bit more and explore the state of play for the rest of the majors.

While it’s true that many of the IPCC’s Paris-consistent climate models assume significant use of carbon capture and offsets, uncertainties around the economics and scalability of these technologies remain significant. Accordingly, they should arguably be reserved for the last and hardest-to-abate emissions from certain industrial processes, rather than, say, from petrol in cars. Companies may also want to be more conservative about these technologies’ potentials, which may mean leaning more on alternative levers like production cuts, with capital either being returned or redeployed into other sectors. The end result would be a reduction pathway that shareholders may find more credible.

Capture me if you can

CCUS covers a wide range of applications which all have in common that carbon dioxide is being captured rather than directly released into the atmosphere. The resulting CO2 can then be sequestered in dedicated underground deposits, used as a feedstock in chemical processes or used as part of enhanced oil recovery (EOR). We use the term CCUS loosely in this blog to refer to any of these processes.

The technology isn’t new to oil companies, which have been capturing CO2 for EOR since the 1970s. What’s new, rather, is the scale, specificity and long-term nature of Shell’s and Eni’s CCUS targets. Combined, the two companies plan to add capacity of at least 32MtCO2 per year by 2035 – a figure not far from the current global capture capacity of 40Mt/y, and that’s just for the two companies with specific disclosure. In fact, all the majors as well as other large producers like Equinor and Oxy are planning to use increased, if unspecified amounts of CCUS, meaning the true growth figure is likely much higher. We have summarised several companies’ ambitions and key CCUS projects in table 1 below.

The problem is that uncertainties around cost, scalability and end use remain significant. Costs depend heavily on the application, with natural gas processing on the cheaper end, at around $20-27/t, and gas power plants on the expensive end, at $50-175/t. The deus ex machina  that can make these projects economically feasible is a high carbon price, something that has only been within grasp in the last year: EU carbon credits currently trade at a record high of about $40/t. This is enough to incentivise some of the cheaper applications like natural gas processing, though applications in refining and utilities are still a tough case economically. In the US (where a nationwide carbon price is still some ways off) CCUS has enjoyed increased tax credits since 2018, though ostensibly this hasn’t led to a surge in new projects yet.

Even if companies can make the economics work, the task of scaling up still seems steep: today’s average CCUS plant captures around 1.5MtCO2/y, so Shell’s 2035 target of an additional 25MtCO2/y implies a need to build 16 new plants in the next 14 years – for reference, there were just 28 plants in the world at the end of 2020, with another two under construction. Currently planned projects as listed in table 1 only account for a small portion of the overall targets.

Finally, there’s the question of where the captured carbon goes. If used for EOR – that is, to produce more oil – the overall impact on CO2 emissions becomes much less clear cut, and the risks of accounting trickery greater.

Offsetting your way to zero

Shell’s and Eni’s new targets have also been criticised for relying heavily on emissions offsetting, primarily in the form of nature-based solutions (NBS) – i.e. planting and protecting forests and other natural carbon sinks. The numbers are big – a combined total of 140MtCO2/y by 2030, implying a new forest the size of something between Bulgaria and Spain just for those two companies. Specific targets like these are rare among oil companies, but it is clear that Shell and Eni are not alone in betting on NBS; Equinor, bp and Repsol have all said they may use it to reach their longer-term emissions targets (table 1 below). 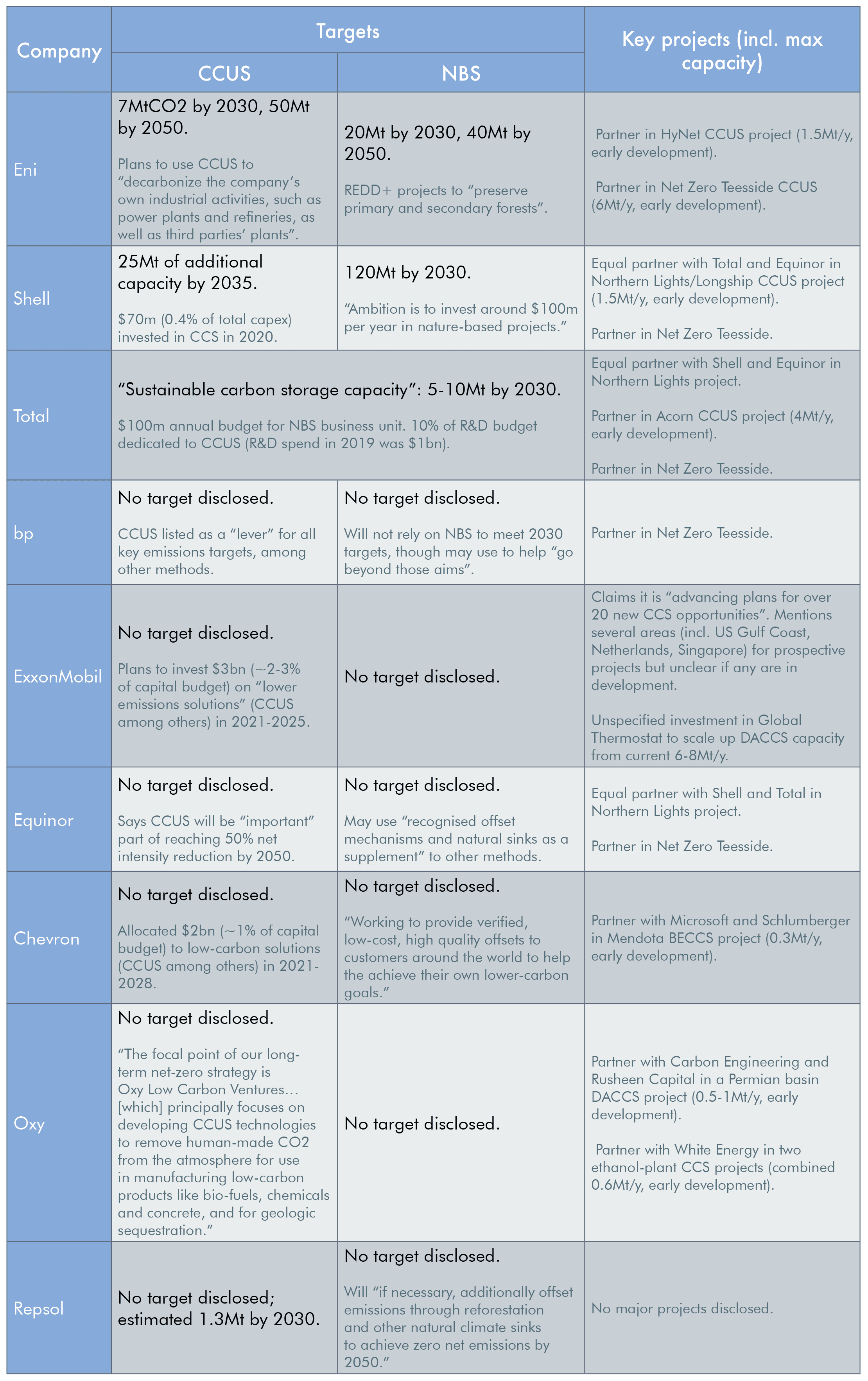 This focus on NBS raises some important questions. Firstly, what form will NBS deployment take? Shell is partly meeting its targets by “avoiding” emissions, in turn by paying to protect forests from logging. That’s not a bad idea in itself – the IPCC reckons deforestation accounts for 13% of global CO2 emissions – but it’s rather a more hypothetical emissions cut for an oil company than reducing production or capturing carbon at the source.Source: Company disclosure, news reporting, Global CCS Institute

Quality is another issue. Even though oil companies claim to use only “high-quality” offsets, monitoring millions of acres of forest is hugely challenging. Indeed, the experience with well-recognised programs like the UN’s REDD initiative has been mixed at best – for instance, weak implementation on the ground means that protecting one forest often leads to a different one being logged instead. That’s not to say NBS is dead in the water, but rather highlights the need for conservative estimates of how much CO2 it can sequester. Shell’s numbers point in quite the opposite direction, with assumed sequestration capacities well above the most optimistic academic estimates.

High-flying CCUS and NBS targets express an inherent challenge in the ongoing arms race of emissions targets. Competing on the size of your ambition – net zero, absolute zero, scope 3 or not, etc. – has a limited runway, because shareholders will inevitably ask the awkward question: How are you actually going to get there? In that context, setting targets for offsets and carbon capture may seem like a way to square the circle and put off more existential questions around reducing fossil fuel production. Unfortunately, it’s not quite so straightforward.

The upshot is that, while companies are right to look at a wide range of solutions, it’s a risky bet to rely on CCUS and NBS to perform miracles in the near term. Taking a more conservative approach may mean leaning more on other levers like production cuts, with capital either being returned or redeployed into other sectors. The end result would be targets that may be seen as more credible – something that both investors and civil society should want and actively encourage.