The Norwegian Ministry of the Environment engaged Rystad Energy to analyse the potential consequences of reduced CO2 emissions under the two degree scenario for global petroleum production.

This demonstrates the need for governments and companies to start understanding their exposure to potential stranded assets in order to avoid wasted capital. The research also shows how particular assumptions will influence the outcome of the analysis.

Carbon Tracker’s research director, James Leaton, says ‘The Norwegian Government has recognised that there will be winners and losers as the energy transition occurs. This analysis demonstrates that high cost options such as Arctic and deepwater projects are likely to be stranded in the future when demand and prices decline.’

Coal vs Oil vs Gas

This research focuses on oil and gas, but at an early stage assumes that the coal sector will contribute most to reducing emissions. In other words coal production will be affected the most. Gas is affected the least in this scenario, as might be expected based on its lower carbon intensity. Only 15% of currently developed oil and gas production becomes stranded (22% oil, 3% gas) compared to a 2C budget up to 2050, but after 2050 this rises to 84%. 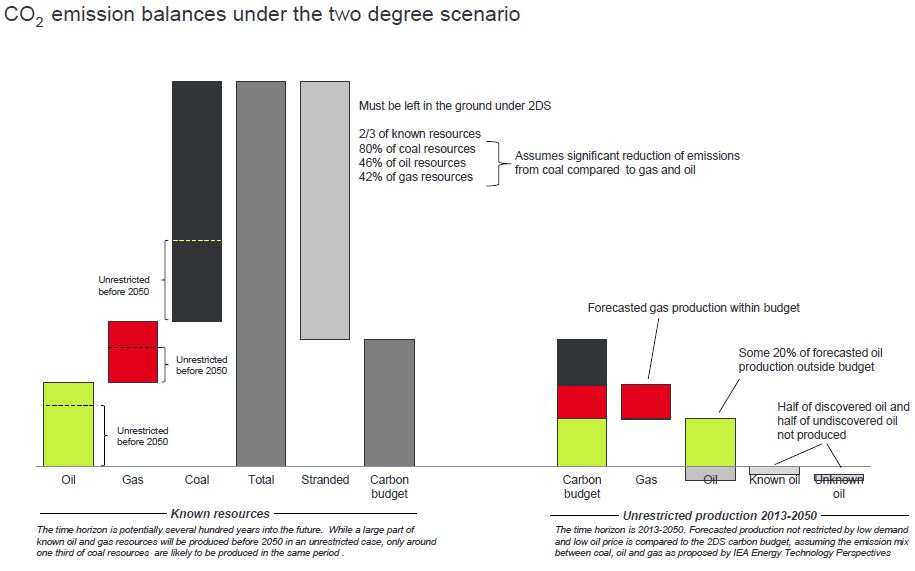 All oil is not equal

The report estimates that any field with a break-even cost above 72USD/bbl will not be developed. This rules out approximately 45% of oil production that is yet to be discovered; and 59% of oil that has been discovered but not yet developed. Of those stranded oil resources which have been discovered but become uncommercial most are located in Russia, the Middle East, West Africa, US and Canada. In terms of stranded undiscovered resources, the geography is similar, with the Arctic and deepwater frontiers proving too costly. Unconventional oil, (tight oil, extra heavy oil, and oil sands), represents around 80% of the oil emissions reductions under a 2C scenario. 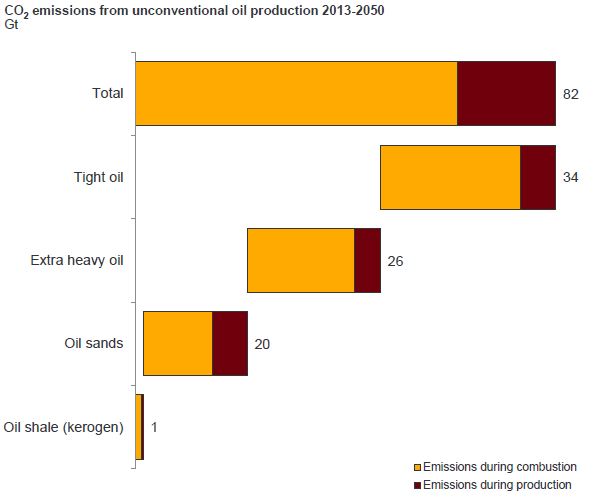 It is interesting to note that Rystad consider oil and gas companies will continue to explore for more reserves in the belief they will find lower cost opportunities. If this is the case however it will displace other more expensive reserves from fitting within the carbon budget. This means that the booking of commercial reserves could become a much more dynamic business.

The Norwegian prospects suffer due to the high costs of deepwater or Arctic conditions. Lofoten is seen as a cheaper option but this is also currently subject to a moratorium for oil gas due to its significance for fisheries and biodiversity. All the major oil and gas companies stand to suffer asset stranding from the oil and gas fields in Norway, with Statoil leading the way with over 1,000Mmboe at risk in a low product price scenario. 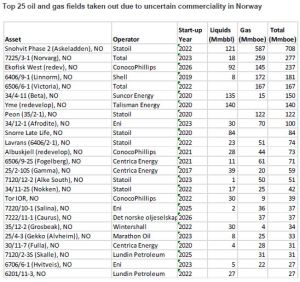 This report follows on from news that Norwegian fund manager Storebrand have excluded 13 coal and 6 oil sands companies from all investments as these stocks could be unburnable, and so ‘financially worthless’, in the future.

All images have been sourced from the full report, available here