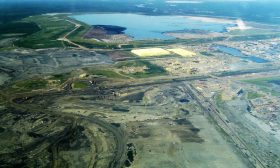 TORONTO, 4th November 2014 -- Investors in Canadian oil sands are at a heightened risk of companies wasting...

“The economics of oil sands are getting more challenging. We expect to see more stranded assets, as expensive projects get shelved with no viable route to market,”

TORONTO, 4th November 2014 — Investors in Canadian oil sands are at a heightened risk of companies wasting $271 billion of capital on projects in the next decade that need high oil prices of more than $95 a barrel to give a decent return, the Carbon Tracker Initiative (CTI) revealed today.

Investors, CTI warned, should challenge the economic logic of these future projects in the face of volatile and weakening oil prices before approval by company executives.

The projects identified in this high-cost band would deliver around 2.0 million barrels per day (bpd) of production in 2030. The Canadian Association of Petroleum Producers (CAPP) cites current production levels at 1.9 million bpd and forecasts production of 4.8million bpd by 2030.1 CTI’s analysis therefore predicts that over two thirds of the projected growth already faces challenging economics, alongside difficulties like increasing pipeline capacity to deliver the oil to new export markets.

The near $30 drop in IPE Brent crude oil prices over the past few months shows how vulnerable future high-cost projects could be if oil companies neglect to factor in sufficient contingencies for higher costs or lower prices. This is why investors have been asking companies to disclose how they stress test new projects against oil demand and price scenarios.2 Investment bank Goldman Sachs recently revised its estimate for Brent crude to $80-$85 a barrel for 2015 throwing more economic doubt on future higher cost development.

“The economics of oil sands are getting more challenging. We expect to see more stranded assets, as expensive projects get shelved with no viable route to market,” said James Leaton, research director at Carbon Tracker.

The challenging environment for oil sands earlier in the year referenced in CTI’s analysis in May will only be exacerbated if the oil price stays around its current level of $85 a barrel (IPE Brent). Major oil companies have already started programmes to cut costs and capex, but this scenario puts pressure on the whole business model for specialists in oil sands development.

“If lower oil prices around the current $85 mark prevail, this will pose significant challenges to the business models of companies relying on opening up new oil sands projects,” said Andrew Grant, financial analyst and lead author of the report at Carbon Tracker.

The listed oil sands specialists – including Suncor, CNRL, Cenovus, and MEG — have around a third of potential capex above the $95/barrel threshold, which limits their options going forward. There are also a number of smaller companies, many of which are privately held, who predominantly have options on some much more expensive oil sands plays.

Carbon Tracker’s research aims to bring capital expenditure plans under public scrutiny. The last six months has seen ongoing engagement between investors and oil companies regarding capital expenditure plans and break even prices. This debate has improved the transparency of the economics of the future oil projects boards are considering. Shareholders are looking for confirmation that companies are not planning on wasting capital on projects.