Anthony Hobley, Carbon Tracker’s CEO, commented, “Exxon saying there is no risk does not constitute prudent management of shareholder funds – its like King Canute assuming he can hold back the tide, but investors can see that a shift in energy is already coming in”

“Exxon have come clean that they are betting on 6 degrees of warming – but investors have no way of managing the risks associated with that trajectory and need to act to get the oil sector’s capital expenditure in line.”

Exxon and other oil companies are responding to requests from their shareholders based on research by Carbon Tracker. For example Carbon Tracker has been working with CERES on the Carbon Asset Risk engagement programme. This has called the bluff of the energy sector on whether they are serious about tackling climate change. Exxon has indicated that they are not planning for an energy transition which will prevent dangerous levels of global warming. Investors need to take action.

The IEA has confirmed that around two-thirds of fossil fuel reserves cannot be burnt if we are to limit carbon dioxide emissions to a level that gives a reasonable chance of restricting global warming to 2°C. This means there is a carbon budget to allocate across fossil fuels. Essentially coal, oil and gas are competing to demonstrate they will get to use the budget. The more the oil sector expects to be used up for transport, the less will be available to burning coal or gas for power generation. Similarly the more state owned entities produce, the less scope there is for private companies. BP acknowledges that reserves exceed a carbon budget for limiting global warming to 2 degrees in their latest sustainability report, but are less clear about the financial implications.

Getting companies to explain how they see their business adapting to the transition of the energy system away from high carbon sources starts a new debate. It brings together corporate strategy and spending plans with climate change policy positions. Long-term investors have an inherent interest in resolving these contradictions between supporting climate policy on one hand, but spending capital on increasing fossil fuel reserves on the other. Shell in its discussion of risk factors acknowledges in its annual report that carbon regulation is increasing, and then also admits that the carbon intensity of its production is increasing, which appears an undesirable combination. Further probing is needed from investors on the logic behind this conscious pursuit of high carbon assets.

Oil analysts have been highlighting that company cash-flow cannot support continued increasing capital expenditure and maintaining dividends. Looking at future plans to spend capital on high cost projects which assumes high oil prices is prudent for investors. As Wood Mackenzie put it – this is solving the value versus volume dilemma. This builds on the issue raised in Carbon Tracker’s Wasted Capital & Stranded Assets report. If companies are betting on high oil prices, will they be able to maintain both dividends and planned capex in a lower price environment.

The oil sector is moving into higher carbon unconventionals to try and maintain production. There is growing exposure to projects in ultra-deepwater, the Arctic and in unconventional plays. All of these bring greater technical risk and higher costs. This will affect different companies to varying extents. We believe it is reasonable to expect a company to disclose the price and demand assumptions it is testing its capital expenditure decisions against, (Shell has just indicated that it use a range of USD 70-110 per barrel). It would also be useful for a company to indicate its level of exposure at various oil prices, and the level at which it would start to impair assets. Companies with higher exposure to projects that breakeven above $80 /barrel are less well positioned to adapt to a low price environment.

This debate is linked to expectations around oil demand and price. Oil production costs have increased at a rapid rate, with capex by the largest oil companies now five times the level it was in 2000. Yet over this time the level of production has stayed around the same level, rather than increasing in proportion to capex levels, (see chart below and here). As the cost per barrel has increased, the profitability of operations has only been achieved by oil prices increasing to cover the cost expansion. If the original price assumptions had played out, the projects would have seen major losses. Analysts are now questioning whether the price trajectory can continue to support the cost trajectory seen over the last decade. 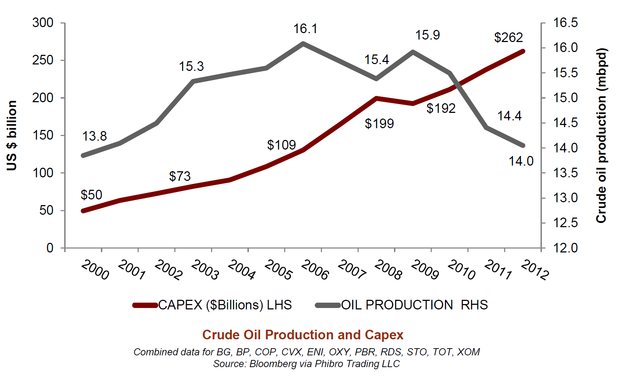 Exxon has confirmed it does not the “incorporate the “low carbon scenario” in its capital allocation plans”. So despite looking at various aspects of climate change, it then ignores the issue for its strategic investment decisions. This demonstrates the problem – that capital is not being deployed by the incumbents in a manner consistent with delivering a rapid energy transition. As Exxon note in their cautionary statement however the world could be very different to business as usual – but the company do not appear to have addressed this:

“Actual future conditions (including economic conditions, energy demand, international trade flows, energy supply sources, and efficiency gains) could differ materially due to changes in law or government regulation and other political events; changes in technology; the development of new supply sources; demographic changes; and other factors”