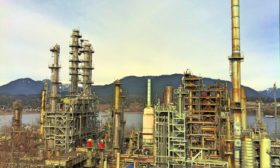 A quarter of global refining capacity could become unviable and be forced to close by 2035 as a swelling tide of climate regulations and rapid advances in clean technologies cut oil demand, finds a report launched today by Carbon Tracker highlighting sector risks for investors.

Falling oil demand in a carbon-constrained world would squeeze margins across the industry, and drive the least profitable refineries out of business. Processing less oil at lower margins means that refinery earnings and hence values could halve by 2035, finds Margin Call: Refining Capacity in a 2°C World. Earnings from the global industry totalled around $147 billion in 2015.

“A 2°C pathway sees oil demand peaking followed by major rationalisation in the global refining industry. Many players will exit the market rather than haemorrhage cash. Investors should beware that the risk of wasting capital extends to all new investments, including expansions or upgrades to existing facilities.”

The think-tank analysed 492 refineries representing 94% of global capacity in what is believed to be the first analysis of how the industry would fare in meeting a transition pathway aligned with international objectives to limit climate change to 2°C based on clean and revolutionary technology. It is based on the International Energy Agency’s 450 scenario[1], which sees oil demand peak in 2020 and then decline by 23% over the next 15 years.  The report was produced with support from Wood Mackenzie, who provided the source data and helped develop the methodology.

“The consequences of achieving a 2˚C world are far more detrimental to the refining sector than the upstream sector, as it results in structural over-capacity and associated poor refining margin environment, which can only be addressed by sustained capacity rationalisation.”

The industry expects oil demand to grow steadily up to 2035, in contrast to the 2˚C scenario analysed.  Transport fuels (diesel, gasoline and jet) account for 70% of refinery profitability, and represent the portion of the barrel most vulnerable to demand destruction. Previous Carbon Tracker research[2] has found that oil companies may be seriously underestimating the impact of, for instance, the rapid growth in electric vehicles, which could make up a third of the road transport market by 2035.

Refineries can account for a quarter of assets on oil majors’ balance sheets, worth tens of billions of dollars, and generate key profits. The 2˚C scenario modelling found Total and Eni are the most exposed, risking a 70%-80% fall in earnings from their refineries by 2035 as demand stalls. Shell and Chevron risk a 60%-70% fall and ExxonMobil and BP a 40%-50% fall. Saudi Aramco, which is due to be part-listed, may see earnings swing to a loss.

The Taskforce on Climate-related Financial Disclosures set up by the G20’s Financial Stability Board has called on companies to disclose their exposure to climate risk, taking into account 2°C scenarios in line with the Paris Agreement on climate change. Its recommendations have so far been supported by more than 100 companies with $11 trillion of assets under management.

It finds that there is already enough capacity to meet future demand in the 2˚C scenario and importantly for investors that no new refinery capacity needs to be added globally, although there may still be some investment driven by regional demand trends or strategic interests.

Margin Call: Refining Capacity in a 2°C World has been produced in collaboration with Danish pension fund PKA and Swedish pension fund AP7. The report follows on from 2 Degrees of Separation published in June, which focused on the upstream activities of the oil and gas sector.

“Long-term institutional investors worth $22 trillion support the Paris Agreement and 2˚C scenarios are powerful tools to help them identify whether companies are aligned. Carbon Tracker’s research finds that many companies in the refining industry need to reconsider their business strategy in the light of policy and technological changes reducing demand for oil, and should lead investors to price in these financial risks.”

Carbon Tracker used Wood Mackenzie’s Refinery Evaluation Model and its associated net cash margin data as inputs to identify those refineries most vulnerable to falling prices in a weak market and the companies with the greatest exposure. Based on historical precedent, the study assumed closures to follow once global refinery utilisation drops to 75%.

The study models margins as falling by $3.50 a barrel across the industry by 2035, driving a reduction in global capacity equivalent to 25% of the current refining industry. Global composite margins were estimated to be $5 a barrel in 2016.

It notes that 21% of existing refineries are already unprofitable, and warns that loss-making refineries which are kept open for strategic reasons will exacerbate margin declines and put pressure on low-margin refineries elsewhere.

[1] The scenario is the IEA’s carbon-constrained scenario. It is based on delivering on atmospheric CO2 content of 450ppm est. to result in 2˚C of warming above pre-industrial times based on 50% probability.