On the one hand, an announcement back in September signalling the end of the country’s financing of international coal showed small signs of progress.

China has since however resisted calls to significantly raise the ambition of its nationally determined contribution (NDC) to the Paris Climate Agreement ahead of the COP26 summit, with the majority of targets identified in its late-October submission having already previously been announced. The country will aim for peak emissions by 2030 as part of wider aims for 2060 carbon neutrality.

President Xi Jingping’s absence from the summit also means it appears unlikely that China will make any firmer commitments in Glasgow, although a Chinese team of negotiators is in attendance. China was conspicuous by its absence, along with the US and India, from a 190-strong coalition of nations and organisations announcing new commitments to coal phase out at COP26 this week.

The submission of China’s updated NDC has come at a time when the country has enacted new measures to support its coal-fired power industry, which has run into further economic difficulties this year amid sharp rises in international coal prices.

Beijing has ordered domestic coal mines to increase their production and has introduced price caps which limit the level at which thermal coal mines are able to sell to power producers. The government also last month relaxed wholesale power pricing rules for coal-fired power generators to allow such firms to pass higher fuel costs onto customers through electricity bills.

The actions have been necessary to ensure China’s security of power supply owing to the country’s continued heavy dependence on coal for its electricity needs, following years of over-investment in power stations running on the polluting fuel and a stagnated shift towards cleaner technologies.

But efforts to ease the current crisis must not encourage any fresh waves of new build coal plant development.

Some investors may choose to interpret the government’s actions as a sign that the industry will be propped up and supported during such uncertain periods, but the economics show that developers would be unwise to risk the funding of new coal plants in China. Such projects will likely be restricted to operating at much lower-than-expected capacity factors than developers typically plan for when final investment decisions are made.

Our Do Not Revive Coal report from earlier this year found that all of the 187 GW of new coal plant capacity planned for build in China at the time, accounting for just under 62% of the Asian capacity in planning that we analysed, generated a negative net present value[1]. This means that developers would be unlikely to recover their initial investment from a project, even if a unit generated a net profit during the majority of years of planned operation.

Our analysis assumed that investors in new coal plant capacity will plan for a unit lifetime of around 40 years. But in the event that the Chinese government does eventually introduce policy designed to align the country’s power system emissions with the aims of the Paris Agreement[2], we estimated that a coal plant phaseout year no later than 2040 would need to be set, clearly limiting any new build units to lifetimes of less than 20 years if enforced.

This should act as a clear signal to potential developers to not proceed with planned projects, with close to $83 billion of value at risk of destruction if China’s entire planned pipeline of new coal units proceeds to development.

The average capacity factor of China’s coal fleet has fallen by around 14% over the past decade alone, largely as a result of overcapacity as more units have been brought online despite renewables having already begun to displace coal in the generation mix.

We estimate that by just 2024, renewables will outcompete operating coal plants on a cost basis in all parts of China, meaning that the trend of declining usage and profitability for coal will accelerate further.

Figure 1: Falls in capacity factors in China since 2018 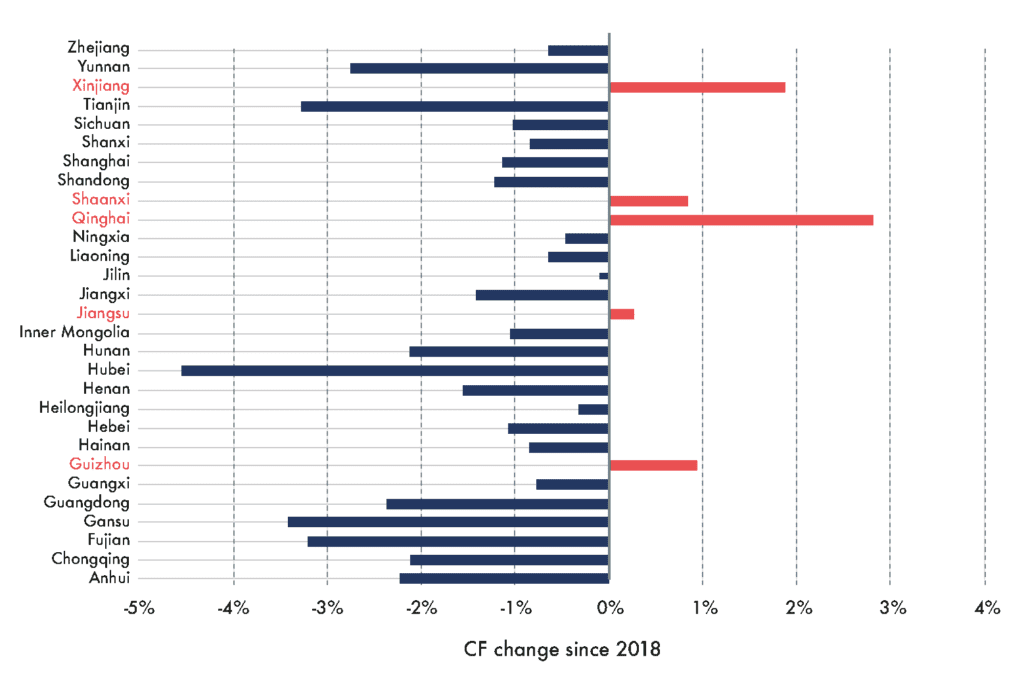 One of the positives to come from China’s updated NDC submission was the formalisation of a target to reach 1,200 GW of combined wind and solar capacity by 2030. At the country’s 2020 deployment rate however, this figure could be reached by 2027 and as much as 1,700 GW could actually be feasible by the end of the decade.

Both the Chinese government and investors should be encouraged to fully focus their attention on this rapidly expanding sector which will ensure China remains the world leader on energy production long after we see the end of coal.

[1] The NPV is the estimated sum of all future cashflows of a project – taking into account investment costs, operating profits, financial costs, depreciation and taxes – discounted to the weighted average cost of capital (WACC).

[2] We used the IEA’s Beyond Two Degrees Scenario to model power system emissions reduction alignment with the 1.75˚C midpoint of the Paris Agreement’s ambition range.