COVID-19 and the energy transition: crisis as midwife to the new

At this time of crisis, the immediate issue is to solve the health and economic emergencies, and we salute the heroes of the medical and logistics services who are getting us through.  However, when the crisis passes, a new world needs to be built, and COVID-19 has the potential to be the midwife of the energy transition from fossil fuels to renewables.  The crisis is likely to bring forward peak demand for fossil fuels as a whole (first coal, then oil then gas), and weakens the lobbying power of incumbents.  It creates space for policymakers to put in place a sustainable energy system and so enables the clean energy revolution to continue.  In the midst of the chaos and despair that we face, this is a beacon of hope for the future.

The fossil fuel sector has had a pretty good run.  After 200 years of continuous expansion, and with many governments and think tanks under their control, they were looking forward to many more decades of paying fat dividends to a lucky few.  And yet the signs of the malaise were already there even before 2020 thanks to the growth of renewables and the rising regulatory pressure.  Total demand growth for fossil fuels had slowed to just 1% a year, and in nearly 40% of the world fossil demand was already falling.  In 2018 we calculated that fossil fuel demand would peak in 2023 if the rapid growth rate of renewable energy technologies continued. Stock prices had been underperforming for a decade, with the oil and gas sector dropping from 15% of the US stock market to under 5%.  Investors were worried about financial risks, and governments were increasingly concerned about the millions of deaths from fossil fuel pollution, import dependency and the looming climate disaster.  The sector was already deeply vulnerable.

And then came the crisis.  Fossil fuel demand has collapsed and may never surpass the peaks of 2019.  By the time the global economy recovers, all the growth may be met by renewable energy sources.  The maths of what happens when a sector near its structural peak hits a cyclical downturn are pretty simple: the peak of demand is advanced by a few years.   This is precisely what happened to the European electricity sector as it stumbled unsuspecting into the 2008 crisis.  Demand for fossil fuels for electricity collapsed, and never again reached 2007 levels because by the time electricity demand recovered, renewables were large enough to supply all the growth; share prices fell by up to 90% as $150bn of assets were written off; the sector underwent radical restructuring, and was forced to embrace renewables and reinvent itself for the new world.  And once the peak is passed, the fossil fuel sector as a whole will face an eternal scrappy battle for survival, struggling with overcapacity and stranded assets, with low returns and high risks.  One area of fossil fuels after another will face its peak; we have likely already seen peaks in coal, in conventional cars, and across the OECD. 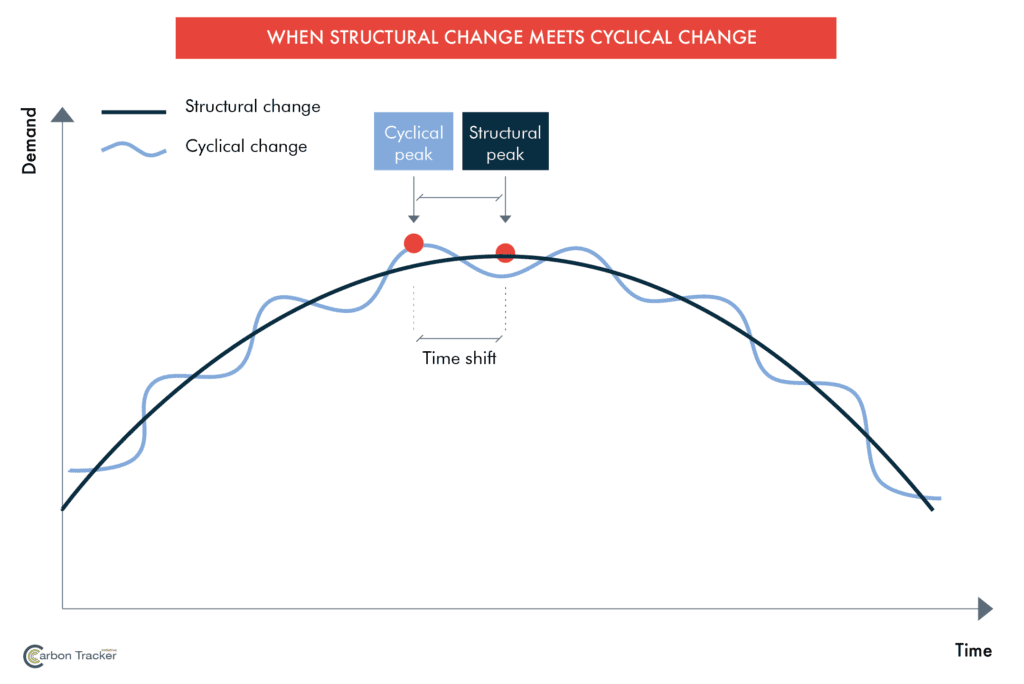 The short-term impact on the renewable sector will be damaging, as with any shock, but there is a world of difference between the challenge faced by a huge low growth incumbent and a nimble high-growth challenger.  Component supply shortages, corporate bankruptcies and so on will certainly damage the renewables sector in 2020.  But there is no reason to believe that the crisis will bring to an end the long-standing story of rapid supply growth from a low base driven by falling prices and superior economics.  The right analogy is with the internet at the time of the stock market collapse in 2000; stock prices fell, many companies went bust, but innovation kept happening.  Costs kept falling, quality kept rising, and the technology rose to dominance.

The uncertain issue is the role that governments will play.  As a result of the sudden stop in the economy, many fossil fuel extraction and usage sectors are asking for government bailouts.  So governments will have an unprecedented ability to drive change.   And now is the moment for them to oblige companies to move on from greenwashing to real action, in the way that after 2008 companies like GM were obliged to accept efficiency standards.  Meanwhile it is becoming increasingly clear that governments all across the world will need to enact a huge series of stimulus packages in order to get the economy moving again and avoid a Depression.  But they must avoid the mistakes of 2008 – the money must not be spent on propping up high cost fossil fuel assets with no future.

The key reason for optimism is that the opportunity set in 2020 is completely different to that faced by governments in 2008 because the cost of renewable energy technologies is down by over 90%.  The cheapest source of electricity in almost every country in the world today is renewables.  Electric vehicles are a cheaper way to run a transport system, and the sticker price of an EV is about to reach parity with that of traditional cars.  There are new ways of producing steel and cement with renewable energy sources.  The growth, the innovation, the jobs, the creativity, are shifting fast to the new energy sectors, leaving in their wake a vast amount of unneeded fossil fuel capacity – stranded assets.  We no longer have to tolerate fossil fuel pollution and uncontrolled global warming as the price of getting energy.  Meanwhile all this infrastructure has to be built: solar panels, wind turbines, grids, electric vehicle charging points, new energy sources for industry and so on.  This is the great challenge of our generation, a way to restart our economies, and the solution to save the planet from the catastrophe of global warming.

In the short term the usual concerns are resurfacing.  Parts of the fossil fuel industry are trying to use the crisis to roll back environmental standards, reduce taxation, and offload high cost assets onto the taxpayer.  And in countries where they have been able to install their own people at the top of government they are likely to succeed.  However, 80% of the world lives in countries that import fossil fuels, and there is no upside for these countries from propping up a redundant fossil fuel system.  Meanwhile the collapse in fossil fuel prices means that people are worrying about a return to the 1990s, when constraints on fossil fuel usage were lifted amid very low prices, and demand picked up.  In the very short term, low prices will of course stimulate a pick-up in demand from today’s depressed levels.  However, low prices are a symptom of the structural weakness of the sector, and they will not be sufficient to drive a long-term resurgence in demand.  Fossil fuels have relatively high fixed costs, and compete with renewables on technology learning curves, which mean that renewables get cheaper every year.  Below a certain price level, some fossil fuels cannot be produced economically.  Moreover, because of the climate crisis, governments cannot afford to take their foot off the pedal of efficiency gains.  On the contrary, they need money, and now is the time to remove subsidies, and use a tax wedge so the externality costs of the fossil fuel sector are properly charged, and the money redistributed to citizens.

The emergency is now.  Governments must act to stave off the health and economic crisis.    But when the crisis passes and the moment for sober reflection arrives, we have a unique opportunity to reboot our economies.  We must avoid bailing out and expanding the dying fossil fuel system, and instead help their workers retool for the new world.  This is a chance in every country to build the efficient, sustainable and equitable world the fossil fuel advocates told us was impossible.  Their day is over; let us build anew.

The IEA on Thursday[1] released some eye-watering projections for energy demand declines...

Carbon Tax – an idea whose time has come

I was sitting in a hot tub in Leningrad in the summer of 1990 when I realised the Soviet...

The Speed of the Energy Transition Press Release