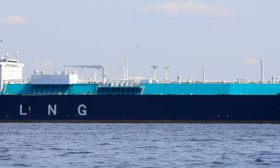 Potential LNG projects get left on the shelf, limiting growth

LONDON/NEW YORK, July 7 – A new global gas study published today by the London-based Carbon Tracker Initiative, identifies $283 billion of possible liquefied natural gas (LNG) projects to 2025 that are likely to be surplus to requirements in a low demand scenario.

A transition to a low carbon economy indicates there is some room for gas demand growth to 2040, unlike coal and oil use that must peak and decline. But if the world is to stay within a carbon budget that limits global warming to the 2⁰C U.N. target, energy companies will need to be selective over which gas projects they develop[i]. This is also the case in a low demand scenario explored in the paper.

The study finds that over the next ten years $82 billion of potential capex in LNG plants will not be needed in Canada, $71 billion in the United States and $68 billion in Australia in the lower demand scenario. [ii] The value of unneeded LNG projects rises to $379 billion by 2035.

“Investors should scrutinise the true potential for growth of LNG businesses over the next decade. The current oversupply of LNG means there is already a pipeline of projects waiting to come on stream. It is not clear whether these will be needed and generate value for shareholders,” said James Leaton, Carbon Tracker’s head of research.

The analysis, which completes the think-tank’s series of Carbon Supply Cost Curves, follows a similar approach to the oil and coal studies published last year that identify high-carbon, high-cost projects for investors. It finds that new projects that rely on an LNG price of more than $10/mmBtu may not be needed over the next decade.

Shell’s agreed $70 billion takeover of BG will combine two companies with significant LNG projects over the next decade, making it by far the biggest player in the market. Shell has disclosed that it assumed oil prices will recover to $90 per barrel in making the offer, which translates to an oil-linked LNG price of $14-15/mmBtu based on typical contract pricing formulae. The analysis suggests that $85 billion of Shell’s and BG’s potential future LNG project options may not be needed under a low demand scenario to 2035.

The study finds that 16 of the world’s 20 biggest LNG companies are considering future major projects that are unlikely to be needed to meet demand to 2025. Only three, Eni, Cheniere and Noble, have additional projects that are needed to meet demand to 2025. The remaining company, Total, is not modelled as developing any new LNG projects over the course of the next decade beyond those already operational or under construction.

“The size of the gas industry in North America could fall short of industry projections – especially those expecting new LNG industries in the U.S. and Canada. Avoiding the combination of U.S. shale gas being exported as LNG will be important if we are to use the carbon budget most efficiently,” said Andrew Grant, lead analyst at Carbon Tracker and co-author of the report.

Gas has been perceived as the cleanest fossil fuel and huge investment has poured into developing new gas supplies. But there is a limit to the amount of gas that will be needed in a world committed to a 2⁰C limit, especially as there is currently a glut of LNG, and the cheapest sources are likely to be used first. The study analyses projects that companies are considering but have not yet made final investment decisions on.

“Natural gas is complex when seen in the context of a climate-constrained world. It can deliver better outcomes than coal, but gas must continue to work on reducing its fugitive emissions and there is a possibility that if it reaches too large a share of the energy mix then in the longer run this could still be incompatible with a 2⁰C outcome,” said Mark Fulton advisor to Carbon Tracker and a co-author of the report.

The study indicates that there is a perfect storm of factors in play to cause a rapid transition to a low-carbon energy system. Cheaper renewables, stronger energy efficiency measures, new storage technologies, higher carbon prices and fluctuating energy prices will all influence global gas demand. As renewables costs come down, some regions are likely to leapfrog over gas straight to renewables.

Recent calls from the European oil and gas industry for a global carbon price show the industry is under pressure to demonstrate its role in a low carbon future. Natural gas production results in the leak of methane, a highly potent greenhouse gas. These “fugitive emissions” must be kept below 3% for gas to maintain its climate benefit over coal, so minimising them should be a high priority for the industry.

“Fugitive emissions are on the run in the U.S. – regulators, investors and industry leaders are all out to ensure gas can demonstrate it has a climate advantage over coal,” said Anthony Hobley, CEO of Carbon Tracker.

The paper shows that the highest greenhouse gas emissions are caused by unconventional gas supplied via LNG infrastructure. Fortunately, however, it finds that only around 17% of LNG fed by North American Shale gas or Australian coal-bed methane is needed in a low demand scenario.

Over half of the unneeded LNG capex analysed relates to unconventional gas projects — like shale, tight gas and coal bed methane — in the United States and Canada. Foregoing this supply will limit future greenhouse gas emissions according to the study.

Carbon Tracker’s analysis breaks down demand growth into three main markets: North America, Europe and global LNG, which combined represent half of the global gas market; the remainder is largely produced and consumed domestically and therefore does not interact with the globally traded gas markets referenced. There is little evidence from the project economics that Europe could repeat the US shale boom.

“The economics shows UK unconventional supply will struggle to compete in the gas market over the next decade, and shale gas could only contribute a tiny volume if projects do go ahead,” concluded Andrew Grant.

[i] The CO2 budget for gas in the reference scenario is 216 GtCO2, or 24% of the total budget to 2050 of 900GtCO2. It is based on the proportions of emissions from coal, oil and gas projected in the IEA’s 450 scenario. The budget is estimated by the Grantham Research Institute on Climate Change at the London School of Economics to give 80% probability of limiting anthropogenic warming to 2 degrees.

[ii] Carbon Tracker’s low demand scenario falls below the IEA’s New Policy Scenario but is above the IEA’s 450 Scenario (See graph showing comparison of global gas demand to 2035). It reflects a level of demand below business as usual that relates to the latest information and changing context about future plans. This demonstrates that the direction of travel equates to a downside for fossil fuel demand.