The IEA redraws the Climate-Energy map – does it tell us what route to take?

Analysing the potential for stranded assets is important work that the IEA is well placed to do. Having decided to look specifically at this issue, how does it direct the energy sector to avoid stranded assets?

“For this analysis, we define stranded assets as those investments which have already been made but which, at some time prior to the end of their economic life (as assumed at the investment decision point), are no longer able to earn an economic return, as a result of changes in the market and regulatory environment brought about by climate policy.”

This is a logical approach, but may need adjusting for different parties. For example, is covering costs enough to avoid being a stranded asset, or should assets have to meet the expected rate of return for investors?

Reserves that have not yet been invested in will be stranded from the market as unburnable carbon, and be left in the ground, but will not fall under the stranded asset definition.

It is clear that more unmitigated coal power plants do not fit within a carbon budget for a two degree world. The IEA notes that 2300GW of power generation cannot continue as is in its 450 Scenario. This breaks down as: 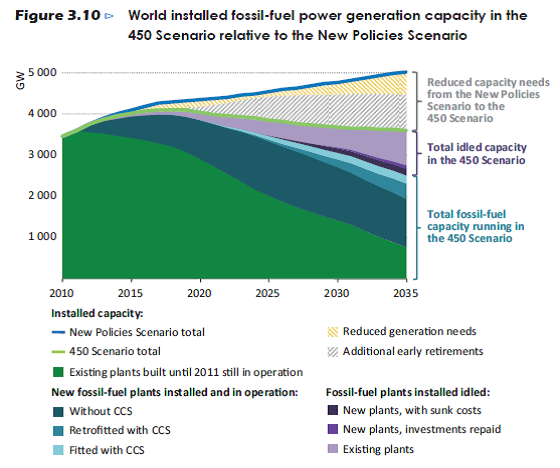 We would recommend investors consider the implications of this, which are not drawn out by the IEA. This will impact revenues, cause asset write-downs and affect overall project returns. Valuations are based on ongoing revenue streams which are clearly affected here. The asset base of utilities will also be eroded more quickly than currently indicated. The graph shows how significant the 84% that gets turned is, as well as the limited impact of CCS over the next couple of decades.

However there are winners as well as losers, and in fact the IEA predict that net revenues will increase by $3trillion in the 450 Scenario, as non-fossil fuel powered generation gains. So there is an upside for investors who match their exposure to this outcome. 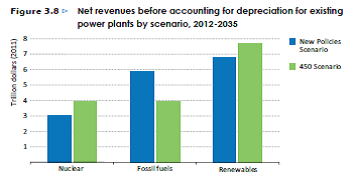 Oil & Gas
An interesting development is the IEA’s allocation of carbon budgets between fossil fuels. Oil is allocated budget, which reflects its continuing domination as a transport fuel. Gas is allocated carbon budget, which provides greater carbon efficiency for generation of power. This leaves coal as the loser. Only 20% of global coal reserves can be developed by 2050 without CCS in the 450 scenario, compared to 40% if the current policy regime were to continue. 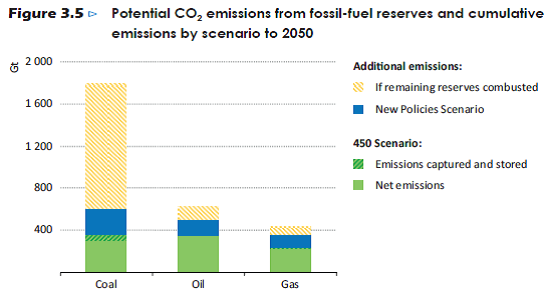 The IEA indicate that only 5-6% of oil & gas assets will become stranded – but coming back to their definition this does not include those that just get left in the ground having never recouped the exploration costs.

The IEA focused on a sub-section of the current subsidies supporting fossil fuels, focusing on consumption in developed nations. However as Lord Stern commented at the London launch of the paper, a broad definition of subsidy could be considered any measure (or lack of it) which enables an entity to avoid a cost. Hence the failure of markets to deal with externalities such as climate change is a subsidy to the emitters of greenhouse gases. More specifically we would also note that many host governments provide tax incentives to promote exploration for more fossil fuels, which drives capital in the wrong direction. Oil Change International have highlighted how widespread fossil fuel subsidies are, and dealing with this issue would shift the balance away from high carbon options significantly. Regulators are quick to withdraw support from renewables activities as they develop, yet the mature fossil fuel sector receives ongoing support.

Are the capital markets using the IEA’s map?

To paraphrase the IEA analysis, the report indicates that:

It is clear that the markets need to start using this map to direct capital, rather than geological surveys of further reserves.