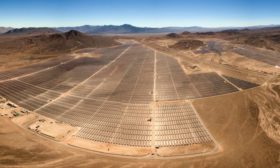 14 November | South African Pavilion As part of COP27, Carbon Tracker will be launching a report on...

Senior Cleantech Analyst and report author Kofi Mbuk said: “The energy transition from fossil fuels to renewables is inevitable and irreversible. The growth in energy demand globally and regionally is now being met by renewables and squeezing out fossil fuel demand. In Africa – and across emerging economies – solar and wind offer the best route for economic development.”

Kofi Mbuk said: “The cost of solar continues to fall dramatically and this means African countries have the opportunity to unlock huge pools of private and public finance for their energy transition. Solar asset owners can now sign Power Purchase Agreement (PPA) contracts at a tariff level that competes with incumbent coal and gas power generating assets. By the end of this decade, we project that across Africa it will be cheaper to generate electricity by building new solar than continue to run both coal and gas power plants.”

The war in Ukraine is a further example of the inherent fragility of the world fossil fuel system. It is accelerating the energy transition, with the consequence that African nations looking to rely on fossil fuel-based strategies for energy security or wealth creation are at high risk of value destruction.

A number of nations in the developing world and particularly Africa, have been looking towards strategic development of fossil fuel resources for wealth creation through export revenues and for securing availability of domestic energy, chiefly gas, at competitive prices. Whilst some governments may channel investment through national oil companies (NOCs), others may look towards investment by international oil companies (IOCs).

The energy transition implies such strategies are high risk and African nations may be better advised to accelerate investment in renewables and low carbon alternatives. The likely reality of the energy transition will be lower oil prices as a result of declining fossil fuel demand. This in turn, bears several consequences:

2. Failure to achieve domestic energy security: often, gas is a by-product of oil production, which in turn means lower availability of domestic gas stemming from lower-than-expected investment. Whilst one might argue that the result would be lower global gas prices and therefore a positive impact on affordability, the current situation illustrates the likelihood of premium buyers countering this and particularly LNG remaining a premium commodity;

3. Risk to fiscal stability resulting from reduced licensing and tax take. The revenues of petrostates in Africa are at risk from peak oil demand and the global energy transition led by the Global North and accelerated by the Ukraine-Russian war. Crude oil exports from Africa will dwindle as the rest of the developed world gets deeper into the transition, leaving Africa’s energy system exposed as oil revenue from its export market will fall – therefore limiting Africa’s reach to fund its domestic energy market.

The energy crisis sparked by Russia’s invasion of Ukraine has seen European countries turn to Africa to meet their demand for gas. However, the report says African leaders should recognise that this will be short-lived because the Ukraine conflict is also accelerating efforts in the Global North to transition away from fossil fuels. The EU has doubled its 2030 renewable energy target from 22% to 45% of capacity and the US is also legislating for a faster transition.

THE ENERGY TRANSITION CREATES AN OPPORTUNITY FOR AFRICA

With the energy transition, we are undergoing a sea change: from extracted (fossil fuels) to manufactured energy, i.e., energy produced in an industrial process. This is the result of renewables taking over and electrification substituting fossil fuels as the latter become uncompetitive and unsustainable in a carbon-constrained world. Renewable energy, particularly from solar, provides a vast new alternative, zero emissions energy system that can be deployed across Africa with far less technical complexity.

Transitioning to solar also creates far more energy certainty because it reduces the risk of being reliant on importing from energy-producing nations, especially in times of conflict.

SOLAR IS THE BACKBONE TO AFRICA’S NEW ENERGY SYSTEM

Africa receives an abundance of sunlight with an average annual irradiance peaking at 2,112 kWh/m2/yr. (+60% higher than the global average), and a standalone solar capacity factor averaging at 17% (+25% higher than global averages). Africa is an ideal location for utilising solar energy, yet it represents only 2% (~20 TWh as of 2021[1]) of the global utility-scale solar electricity generation.

Building new solar in Africa does not just require capital injection, but robust policies that address grid infrastructure and instability challenges. Utility-scale solar is already one of the cheapest forms of electricity in some parts of Africa, and Carbon Tracker expects that solar will outcompete operational coal and natural gas plants for electricity generation by 2030 across the entire continent. Our analysis shows that the cost of solar could drop below $40/MWh by 2030, which will be cheaper than the cost of running future coal and gas plants in the continent[2][3].

Our focus in this report is to highlight the need for private capital to take advantage of falling solar costs in Africa. Better access to low-cost capital is vital to scaling up new solar investments across the continent. With record learning curves projected to increase to a record high of 25% by the mid-2020s, private capital can now capitalise on this and take advantage of record cheap solar prices. With the right structure and risk strategies, new solar investments in Africa can now earn double-digit returns in their Internal rate of return (IRR) projections – therefore making it one of the most profitable and least risky energy technologies on the planet.

In our case study analysis, South Africa was flagged to have an over-reliance on coal for electricity generation even though new solar is now cheaper ($41/MWh) than the long-run marginal cost (LRMC) of operational coal plants ($46/MWh),

Our case study validates our findings in this report that investing in manufactured energy is now more economically beneficial than fossil fuel assets.

The energy transition from fossil fuels to renewables is inevitable and irreversible. The growth in energy demand globally and regionally is now being met by renewables and squeezing out fossil fuel demand – accelerated by the Ukraine-Russia conflict.

The Ukraine conflict illustrates the fragile position of developing nations in the global energy system, prone to dislocation and upheaval. There is a risk to security of supply as nations compete for premium commodities for marginal volumes, at the same time as well to affordability due to price volatility.

Strategies looking to develop fossil fuels in order to create prosperity and domestic energy security, in particular by African petrostates, are at risk of value destruction as the energy transition unfolds. Prosperity based on export revenues and fiscal take may not be forthcoming as the energy transition leads to globally lower oil prices and declining investment by international oil companies. At the same time, because of the intrinsic link of oil investment to availability of gas for domestic use, energy security may be compromised.

Africa’s vision to expand its natural gas production will leave it financially stranded. There has been clear evidence of the Global North’s commitment to reducing its demand for natural gas. Future gas export revenues (derived from supply to the global north) will fall by more than 50% by 2040, and the gas market will be faced with record low prices due to future low demand.

Electricity will be the backbone of Africa’s economic future, with solar leading the way. Even though prior to the Ukraine conflict, solar was competitive with coal and gas for power generation, the conflict means that the continent should more than ever build solar as a means to decrease its dependence on from its global commodity market and achieve a secure and affordable source of domestic energy. Further acceleration of cost reduction will put Africa in a unique position as a beneficiary from one of the best abundance of solar potential on the planet.

Private capital can now be unlocked to invest heavily in new solar. The economics to build profitable solar investments is now possible thanks to rapidly falling cost of capital. Private capital along with blended finance can now leverage on Africa’s favourable climate and cheap cost of solar to scale up solar across the continent.

Land is no constraint for scaling up solar in Africa. Around 309,951 km2 of land area (equivalent to roughly 0.3% of the total land area of the Sahara Desert) will be sufficient to meet Africa’s current energy needs through solar (874Mtoe). Our South African case study shows that solar and wind will not compete for agricultural land either so there is unlikely to be any impact on food production.

Time is running out. If no immediate actions are taken by African governments within the 5-years to introduce policies to aid a just transition with solar at the helm, we can rule out Africa’s role, as the continent will not be able to meet any of the IEA’s climate scenarios.

Specialist case study support this analysis. We have specialist case studies for South Africa which validate our findings that investing in manufactured energy (solar or wind) is far more economically beneficial than our continued dependence on fossil fuel expansion.